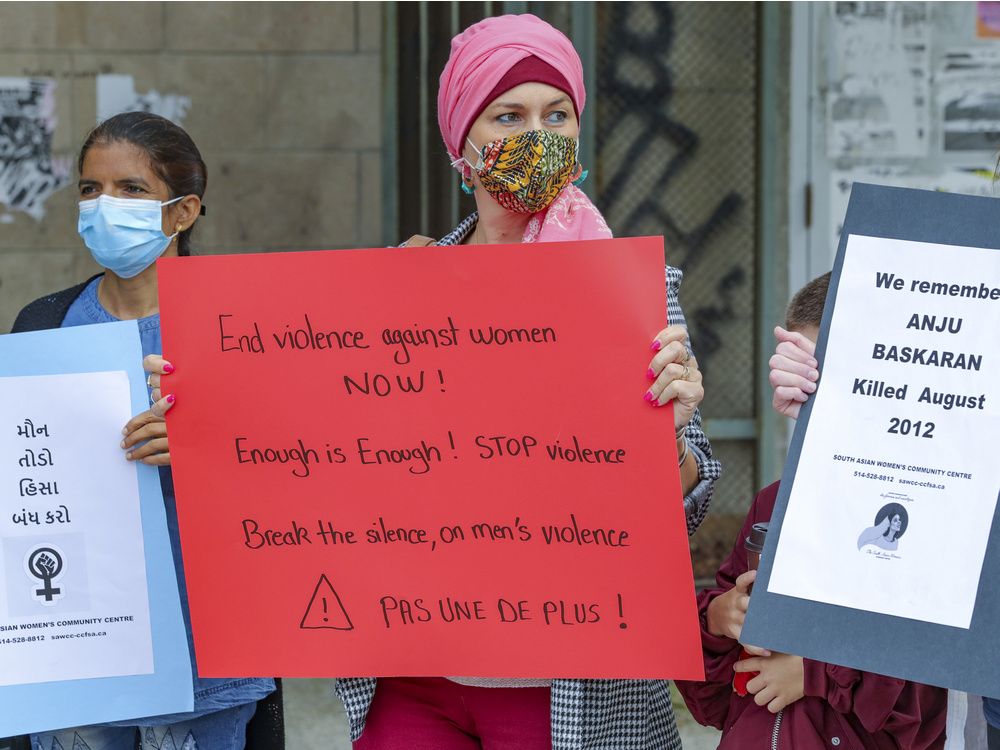 What should we call the grisly discovery of a woman’s charred body inside a burning house in Sorel-Tracy late Sunday night?

Police say they are investigating a possible case of conjugal violence, but that tired old term doesn’t in any way do justice to a crime so heinous.

Neighbours of the victim, Audrey-Sabrina Gratton, were left shaken by the killing in their quiet residential area. Gratton’s parents were seen arriving tearfully at the burned house the next morning by Le Journal de Montréal. Her 20-year-old daughter posted on Facebook that she has now lost her mother, just a year after the death of her father in an ATV accident. Police are waiting to question a man who suffered severe burns, crashed his car nearby, and is believed to have been Gratton’s new partner.

The details of the ugly scourge of domestic homicide are always heartbreaking, but the language we use to describe the phenomenon is often inadequate.

The frequently used expression “family violence” sounds like something that’s none of our business, when it most certainly is. “Conjugal” is not a word commonly used in any other context and only seems like a euphemism to mask the gravity of what we’re talking really about. Ditto for “domestic,” which seems to whitewash the repugnance of one spouse abusing, controlling, manipulating or murdering another.

“Intimate partner violence,” which has caught on recently, casts a wider net, recognizing that brutality doesn’t just happen between husbands and wives, It can affect people of all ages, orientations, and relationship statuses. But it still sounds like something we’re tiptoeing around to avoid offending sensibilities. It also sometimes frames the toxic dynamic on the abusers’ terms, when research has shown that victims are most at risk of being killed when they attempt to break up or leave.

We must call it what it is. Femicide is the word finally catching on in the media — in both French and English — as Quebec confronts an epidemic of women slain by their exes. Last year, 26 women were murdered in Quebec, 17 by a former partner, an appalling and unacceptable toll. It’s important that we refer to an ill that experts say one in three women will experience in their lifetime with vehement. condemnation.

It took decades before femicide became the widely used term to acknowledge the massacre of 14 women at Montreal’s École Polytechnique in 1989 by a misogynist gunman. That level of atrocity is the nadir of violence toward women, but the truth is it happens every day, in households rich and poor, famous and ordinary.

The vocabulary surrounding violence against women is not the only phrase ripe for revision.

The catch-all “child pornography” utterly fails to account for the perpetual sexual exploitation of babies, toddlers, kids, tweens and teens forced into abhorrent acts for the gratification of adults. The suffering continues for years after they are rescued as the material circulates unfettered, maybe for victims’ entire lives. Child abuse images is much more accurate, and would help debunk the convenient myth that’s it’s just a bunch of innocent snaps of youngsters in the bathtub.

“Climate change” also describes a process, but falls far short of communicating the catastrophic harm being inflicted on the planet. Climate emergency or climate crisis are gaining ground as the lingua franca — though some warn this gives a false impression the change is temporary and reversible.

The language around homelessness is facing a similar reckoning. “Homeless” is no longer used as a noun because it’s dehumanizing. Although it’s still an acceptable and commonly employed adjective in many circles, some are pushing the term “unhoused” to ease stigma and perhaps reduce the banalization of the growing problem of housing insecurity. Altering the phrasing also reflects an evolution in attitudes toward housing, which is increasingly viewed as a right.

Words matter, in terms of how they make us think, feel and respond to uncomfortable issues that many would rather avoid. In the media, where the first version of history is recorded, we are constantly reflecting, re-evaluating and updating our terminology or official “style.” But as individuals, it is also incumbent upon us to weigh our turns of phrase carefully. The point is not self-censorship or political correctness. Changes should be intentional — a meaningful attempt to reboot our approach to sensitive matters, to show how seriously we take them.

Of course, the words we choose are no substitute for concrete action to address the root causes of societal ills and begin to tackle them. They are merely a first step.