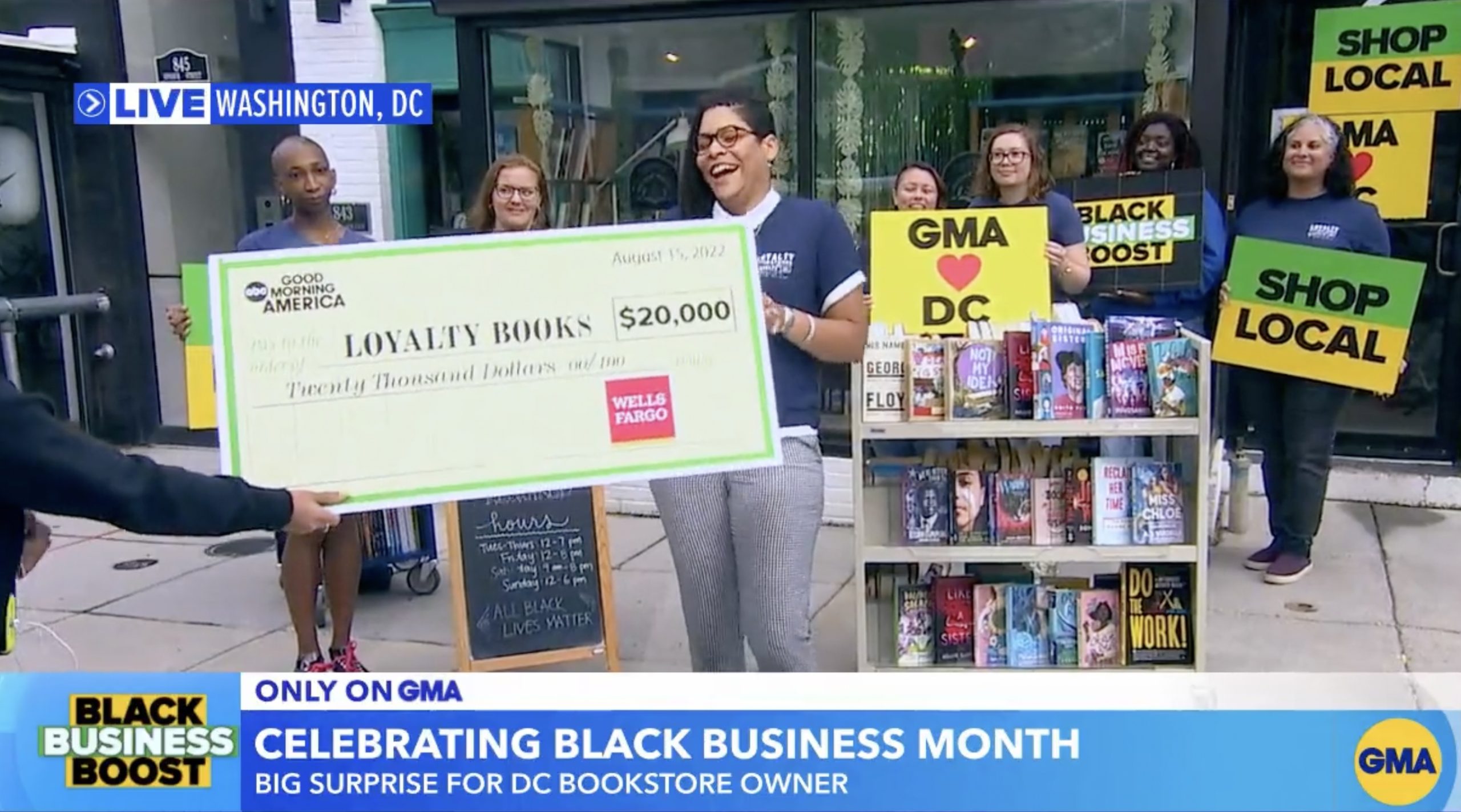 Ohmygod It’s a Giant Check: Loyalty Bookstore, the local Black and queer-owned, independent bookshop with locations in Petworth and Silver Spring, received a bountiful surprise Monday morning. The shop and its owner, Hannah Oliver Depp, were featured on a segment of today’s Good Morning America to celebrate Black Business Month. During the segment, Depp, who founded Loyalty in 2018, spoke of her dream to get the shop’s bookmobile up and running so the Loyalty team can bring books to “every single neighborhood in the city and make sure they can have books in their community when they need them.” The segment ended with a live conversation between Depp, standing outside the Petworth store with employees, and GMA’s hosts, including Robin Roberts, who applauded the business owner for her work and her commitment to supporting the local Black, POC, and queer communities. Roberts then delivered the news: GMA’s friends at Wells Fargo have donated $20,000 to Loyalty to support Depp’s bookmobile. “Oh my god, it’s a giant check!,” Depp exclaimed. “They really do do this!” She says the money will take the van from something parked behind the shop to fully operational and packed with books.

Books Books Books: Speaking of local bookstores, Lost City Books is going on summer vacation this month. From Aug. 22 through 29, the Adams Morgan shop will be closed for a much needed staff break. According to Lost City, the week will be a paid vacation for employees but there’s something in it for customers too. We can help fund the break by buying books. This weekend, Aug. 20 and 21, the store will offer 20 percent off in-store purchases. The discount will move online starting on the 22 and will run throughout the week that Lost City is closed to in-person shoppers.

That’s a Wrap: Hollywood may be in D.C. this month filming the new Netflix film Rustin, but it’s not the only movie making waves in town. Next week, on Aug. 22, AFI Silver will host the premiere of local actor, director, writer, and choreographer Shawn Cosby’s second feature film, 33rd & Memphis. Based in Clinton, Cosby is the founder of Center Stage Academy for the Arts, has choreographed films such as Step Up, and released her first feature film in 2016. She began writing 33rd & Memphis, which follows a 16-year-old Washingtonian’s dream of becoming a dancer despite health setbacks, during the early days of the pandemic in hopes of documenting D.C. talent and creating “something beautiful amid so much tragedy.”

Life Finds a Way: Just when you thought immersive exhibitions were devoted to iconic artists and ’90s sitcoms, they go ahead and throw something new at you. This fall, Exhibition Hub and Fever (the group behind The Office Experience and Van Gogh: The Immersive Experience) bring you Dinos Alive: An Immersive Experience. The “exhibit” will feature life-size moving replicas of over 80 “famous” dinosaurs—don’t worry, no B-rate reptiles will be on display, only the most popular ones like the T-rex and Velociraptor. Though they are animatronic, it’s unlikely Dinos Alive will go full Jurassic Park meets Small Soldiers and actually come to life. (But would I be mad if they did?…) And if the  animatronics get too over (or under) whelming, there will also be a virtual aquarium filled with Jurassic sea giants. Dinos Alive comes to Rhode Island Center in Northeast this October.

Show ‘em What You Got: The DC Music Summit is preparing for its fifth annual music conference, taking place Oct. 14–16 at Duke Ellington School of the Arts, and it wants your talent! The nonprofit is currently accepting applications for presenters and performers for the multiple-day event. Proposals, from industry professionals looking to talk and aspiring artists hoping to perform, are due by Aug. 31. Talk and panel proposals should align with this year’s tracks: community development, youth development, business management, marketing, wellness, professional development, and thriving through COVID. Since its 2016 creation, the summit has helped boost independent musicians’ careers, and focuses especially on supporting women, communities of color, and other underrepresented groups.

In With the News: After 27 years at the helm of International Arts & Artists (IA&A), founder David Furchgott is retiring from his position as the nonprofit gallery’s president and CEO. Via a Sunday email, IA&A has announced that it’s seeking a “dynamic, skilled, experienced leader” to take the reins from Furchgott once he steps down this fall. Interested parties can learn more about the position at DRi Waterstone. Furchgott founded IA&A in 1995.