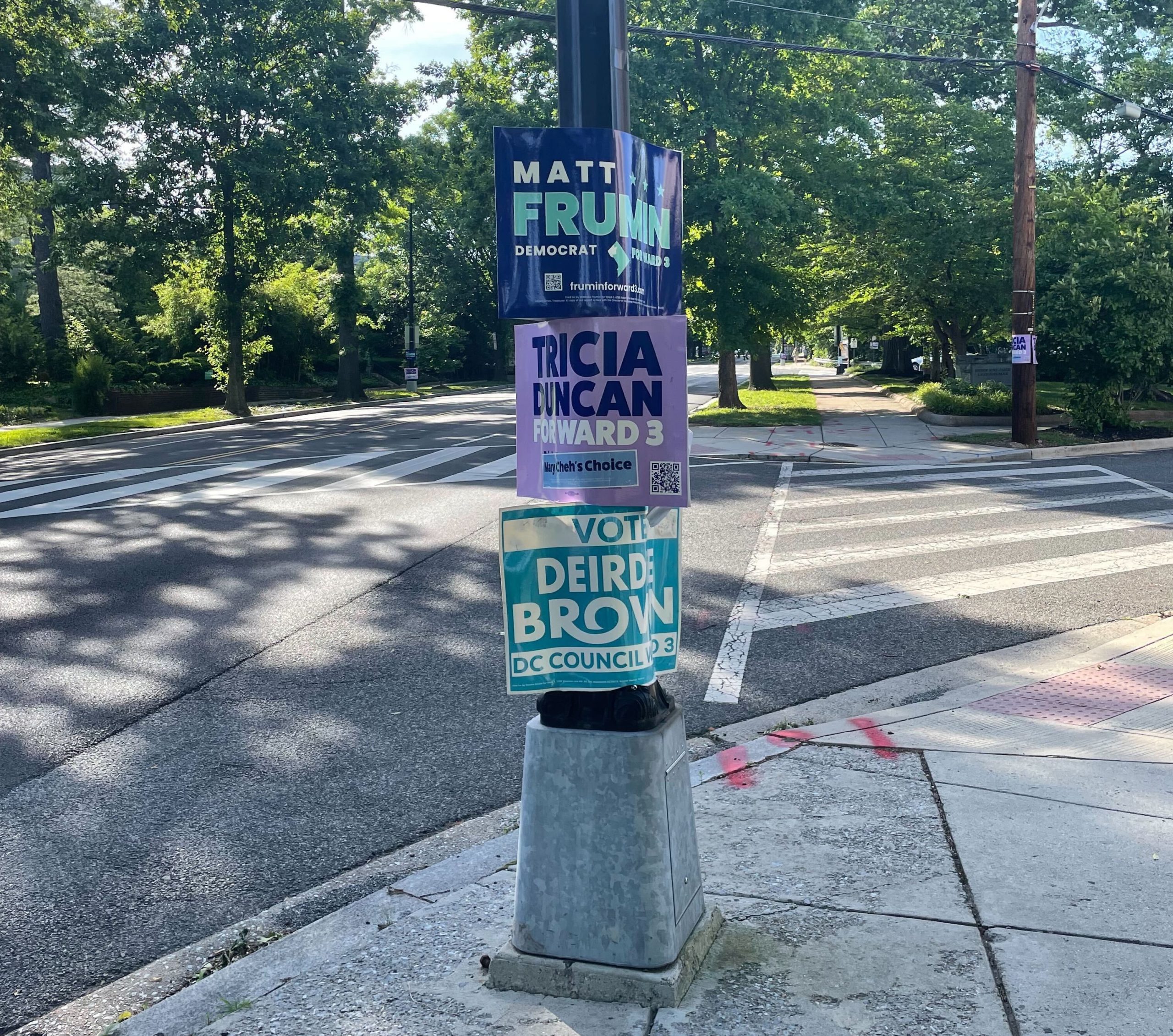 The Ward 3 Council race dropped from nine candidates down to six in the blink of an eye. But for all of that rapid consolidation behind Matt Frumin in an effort to stop Eric Goulet, it doesn’t seem the field will be shrinking any further before June 21.

For now, at least, the four other candidates in the crowded race—Deirdre Brown, Beau Finley, Monte Monash, and Phil Thomas—say they aren’t going anywhere. Each one still sees a path to victory and plans to stay in the race through primary day, despite the growing view of many activists that the contest will come down to a heads-up battle between the progressive-backed Frumin and business (and charter school) friendly Goulet.

With that conventional wisdom hardening, the pressure on those remaining candidates to clear the field is rising. Palisades advocate Tricia Duncan called on her colleagues to follow her lead in a letter announcing her exit, so as to blunt the influence of the pro-charter groups pouring money into the race on Goulet’s behalf, and there’s surely been some behind-the-scenes jockeying as well. Ward 3 ANC Jason Fink, one of Thomas’ top supporters, tells Loose Lips that the local politicos backing Frumin haven’t been shy about making that case to the other candidates over the past few days, though he is adamant that Thomas is “110 percent” staying in the race.

The pressure is perhaps most intense on Finley, the ANC 3C chair who has tried to grab the progressive lane (with only limited success, if his fundraising numbers are any indication). Finley is probably the candidate most closely aligned with Frumin, so it stands to reason that he could pull some votes away from him. Brown has some progressive positions but moderates a bit on other issues, while Thomas and Monash overlap much more with Goulet, so they generally aren’t viewed as direct threats to Frumin.

That all probably explains why fellow ANC Ben Bergmann is singling out Finley for public criticism on the heels of his own decision to leave the race.

“A vote for Beau now is a vote that could have gone to the consensus progressive choice,” Bergmann writes in a text to LL. “It’s effectively a vote for Eric Goulet. That stings—I know it stings—but it’s reality. He should consider the broader stakes and follow Tricia, me, and Henry [Cohen] in creating a united front behind Matt.”

Finley rejects that argument and claims he’s now “the only progressive and the only urbanist left in the race.” He says he has heard from two people urging him to drop out, but the pressure hasn’t been overwhelming, and he’d like to stick around to offer voters another option.

“Everyone should’ve known there’d be outside money spent in this race, I thought it was common knowledge,” Finley says, noting that Goulet has long been close to the big-spending group Democrats for Education Reform that has generated so much progressive outrage. “Early voting is already well underway, so if the idea is to prevent the influence of outside money, it seems a little late for that.”

Finley has a good point, considering that just over 2,800 people have either dropped off ballots or voted early in-person in Ward 3 as of Tuesday, according to the Board of Elections. That’s a small percentage of the roughly 41,000 registered Democrats in the ward (and the total could include people who voted in the ward but live elsewhere) but it’s not an insignificant number in what should be a tight race.

Besides, Monash believes it would be disrespectful to her voters (and donors) to quit this late in the game. She didn’t want to “throw their votes away” and “give up people’s confidence.” Brown says she’s seen the chatter on local listservs from people who feel betrayed by these late drop-outs, too.

“Just because you say, ‘All my supporters are going to vote for Matt,’ that doesn’t mean it will happen,” Brown says. “It’s so late in the game.”

Frumin says he certainly appreciates those points, and stresses that he “would never try to pressure anyone to make a personal decision” like leaving the race. He admits that it may have been better for his campaign to see the field shrink sooner. He sure could’ve used outgoing Councilmember Mary Cheh’s endorsement earlier, too, rather than getting it only after Duncan dropped out.

If anything, Frumin suspects the race hasn’t changed quite as much as the upheaval of the last few days might suggest. He’s suspected for some time now that primary would come down to him and Goulet as the top two, given their strong fundraising and slew of endorsements. But he hopes the sudden consolidation has drawn more attention to the influence of DFER and the other outside groups backing Goulet, such as the DC Charter School Alliance and the DC Association of Realtors.

“Every single person in the District should be shocked and offended by all this unaccountable money flowing into the race, I don’t care where you are on the issues,” Frumin says, noting that DFER has already reported spending $1 million on local elections and will likely spend more in the primary’s final days. “They won’t go away if they succeed. And they need to go away.”

But here, again, the other candidates in the race differ on Frumin’s analysis of the threat of this pro-charter school money. Sure, Ward 3 voters have been inundated with plenty of mailers on Goulet’s behalf (and bombarded by DFER’s team of paid canvassers) but there could be diminishing returns to all that spending.

“Ward 3 voters are a bright group, and they can suss out which support is organic and which support is funded by outside dollars,” Finley says. “This isn’t the first race where we’ve seen this happen.”

The basic calculation by these remaining candidates is that, with six candidates in the running still, there’s no reason to assume things will coalesce into a two-man race. Monash stresses that she’s seen no data to suggest otherwise (though At-Large Councilmember Elissa Silverman did recently poll the race) and feels things are “still very much up in the air.”

“A lot of people tend to dismiss me, but this is still a six-candidate race,” Brown says. “I think we may be in for a surprise Tuesday night.”

She is, undeniably, correct about that. Without much polling, LL’s election prognostications are all just guesses. But all of the indicators we do have suggest that Frumin and Goulet are likely to lead the pack now that the field has winnowed. The question is whether these efforts to generate momentum in Frumin’s direction will pay off in the minds of voters rather than just political junkies like LL.

“If you’d asked me on Thursday of last week, I would’ve told you, ‘I think I’m going to win,’” Frumin says. “Nothing has changed my mind.”