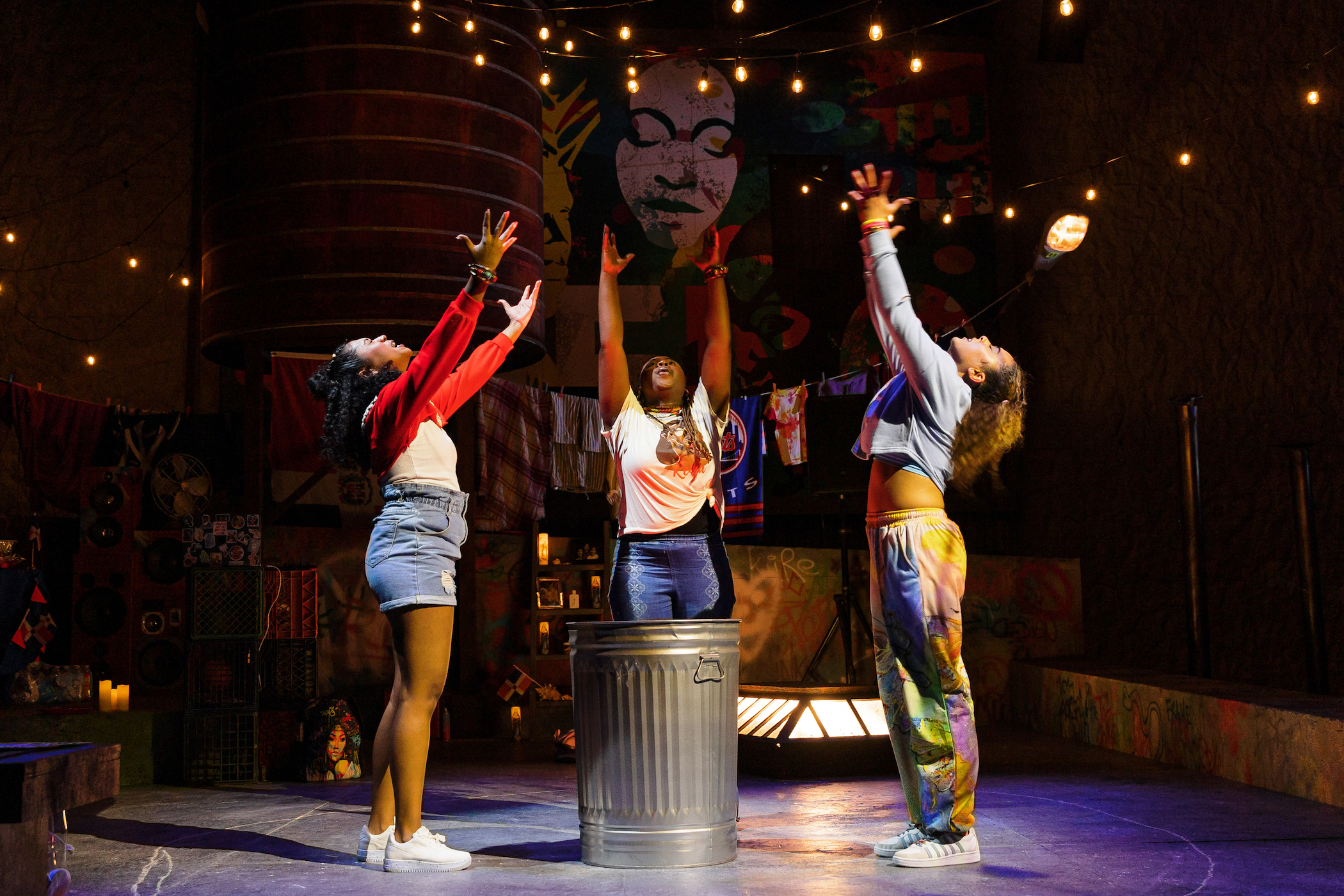 There’s nothing like incense, incantations, and louder-than-mic spirits to evoke folklore. And there’s nothing like three teens teasing, bickering, and reminiscing to give you pangs of sisterhood. There’s also nothing like the merging of the two in a story about Dominican Americans to finally conjure the typical White American girls’ coming-of-age story, à la Now and Then, with characters and a culture steeped in Afro-Latinidad.

That’s what Beastgirl, a musical for young audiences now showing at Kennedy Center, poetry-slams to life. It’s based on the 2016 chapbook Beastgirl and Other Origin Myths by Dominican American poet, native New Yorker, and longtime D.C. resident Elizabeth Acevedo.

The selection of poems strung together for this production isn’t as seamless an arrangement as the rooftop lights on set. C. Quintana’s script plows through a plot where zilch happens beyond sisters calling upon spirits, cheering on and consoling one another. Its main function is as a throughline for the real action: the sharing of afflictions and blessings from and about girls, women, and legendary figures of Dominican descent.

The sisters and their spirit guide, Egun (Brittani McNeill), thrust broken images of the Dominican woman into the fire through the stories they tell. They do this, too, in a literal trash fire they spark on a Harlem rooftop to cleanse themselves of Christopher Columbus’ image. The girls’ actions suggest ancestral reckoning and reclaiming. The face of such men—those who stepped foot on Dominican land when it was still the land of Taíno Indians—can be erased, generations upon generations later, by would-be descendants of the women who faced colonial erasure.

The chosen pieces range from a reimagining of a Dominican urban legend to an ode to the rats of New York’s Amsterdam Avenue. Myths meet the streets in spoken and sung verse to explore multiple facets of the girls’ identities: national, ancestral, bicultural, racial.

Pieces like “It Almost Curdles My Womb to Cry” inject adult themes into the spaces between campy sequences. A mother worries for her future daughter and vows to shape her into a weapon against the boys and men that would harm her. “Liminalities” explores the suppressed guilt of Cami, the oldest sister, over watching the assault of a blonde, blue-eyed girl she knows. “La Ciguapa,” an ode to a mythological woman creature depicted with crocodile skin, backwards-facing feet, and burning hair, rebels against the roles men ascribe to women; “Salt” speaks to the legacy of superstitions—the fear of and respect for la bruja—passed onto the sisters from their mother.

It’s not all bone and shadow. There’s plenty of light on that rooftop—even after dusk, starting with the cascade of tie-dye colors, plaid patterns, and Mets and Yankees jerseys hanging off clotheslines. Jenni Gil plays Cami with an earnestness that makes you root even for the rats she rhapsodizes (and in the District, that’s saying something). Mikaela Secada is anything but seca as the youngest sister, Heketi, who flits about and finds any excuse to squeal, gasp, claw at the air, and (more so than her sisters) swivel her hips towards the crowd. During a scare, she’s reminiscent of Scooby jumping into Shaggy’s arms with practical middle sister Eji (Edima Essien).

Rhythm also lightens the load, particularly for younger viewers. The sisters’ command of percussion, which involves hands, feet, and even nails, creates entire scenes. “Mami Came to this Country as a Nanny,” which composer Janelle Lawrence arranges into a fun musical number, lauds one of the mother’s most memorable teachings: how to properly hand-wash panties.

The fourth wall is broken so often that audience participation in musical numbers is guaranteed, if only to help clap the pieces back together after the songs. Under the direction of Rebecca Aparicio and choreography of Tiffany Quinn, the cast takes full advantage of call and response, including an exercise in sharing spirit names. Egun, their co-facilitator, clad in gold-plated goddess attire and carrying operatic abilities, is iridescent in all the ways.

Not all high-energy moments work so well. One audience question—a single-word check-in on how folks are feeling (“hungry,” some responded the night I attended)—doesn’t lend itself to cementing a theme or advancing the story. Character development piled on in such a short time span can also feel overdone, like fried cheese with mangú and salami heaped onto a plate of tostones you’re already enjoying—or like this forced analogy.

The work could delve deeper into themes such as colorism beyond mentioning the term, which triggers strong reactions from Cami and Heketi. Instead, Beastgirl barely addresses the issue beyond the sisters’ acknowledgment that their different skin shades reflect their distinct fatherhood.

Fans of Acevedo must unhinge themselves from the edges, pauses, and cadences of her performing her original work. It’s the only way to check comparisons at the theater doors. The cast deserve to be judged on the merits of their performance and synergy alone. It’s next to impossible when you can’t get Acevedo’s assonance—stretched out just so with her entire body—out of your head.

Audience members of Dominican descent are also advised to remember that hyperbole, clichés, and stereotypes are par for the course. This is a musical, after all, for audiences 12 and up. Were they not in your face, the cultural references might fly under the radar for viewers not as familiar with all things Dominican.

Without keeping these factors in mind, the Dominican flags and Presidente beer bottle on set, the merengue music blasting over milk crates, the bachata moves to non-bachata music, and the infinite references to Dominican sorcery and salt, can come across as a Dora the Explorer special for Dominican culture. (The girls’ high pitch and diction, clear as fossil resin, doesn’t help you to not hear Dora.)

Whatever your threshold for kitsch and bust-out bouts of salsa and reggaeton, there are plenty of earworms you’ll welcome. The warmth of the sisters’ stomp-and-drum circles, the catchy melody of “Mami, enseñame …,” and the echo of Acevedo’s messages, rife with bruja rage and still with spirit, will remain with you long after the show has ended.

Beastgirl, directed by Rebecca Aparicio with book by C. Quintana and music by Janelle Lawrence, and based off Elizabeth Acevedo’s chapbook, runs through April 22 at Kennedy Center. kennedy-center.org. $20.