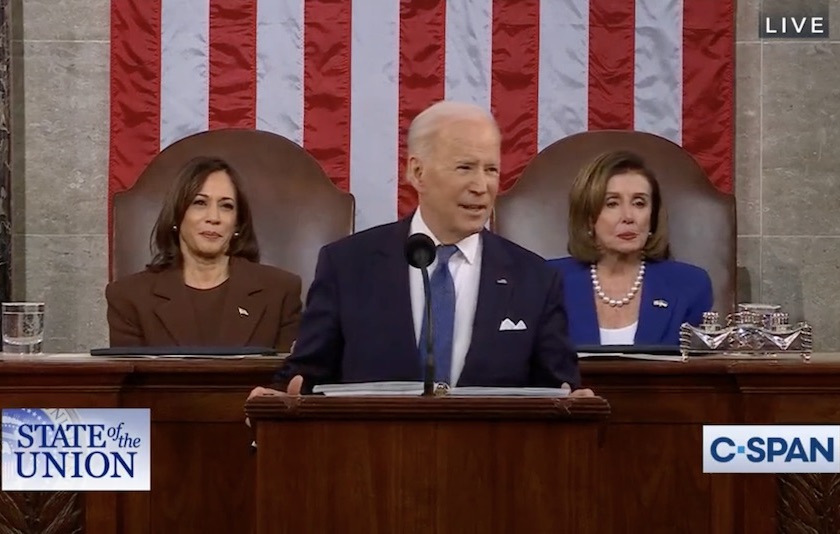 Even as he sought to convince Americans that better times lie ahead in his State of the Union address Tuesday night, President Joe Biden still managed to stand up for LGBTQ equality, among a host of other domestic issues.

Despite being plagued by low approval ratings — even among people who previously voted for him in 2020 — Biden attempted to use his speech as a reset for his presidency, decrying Russia and its power-hungry President Vladimir Putin for invading Ukraine while offering praise and support for the Ukrainian resistance, and seeking to clarify his (and by extension, his party’s) positions on various domestic issues by calling for programs and bills that would make Americans’ lives easier, fight inflation, get the country back to “normal” following a two-year interruption caused by the pandemic, and calling on states and cities to deal with rising crime rates by fully funding police using money appropriated by the American Rescue Plan.

But as he went through the litany of various domestic concerns, Biden seemingly hit on many of the issues and promises he had run on as a candidate for president, even though much of his priorities have been killed in the U.S. Senate, due to the inability to gain 60 votes to overcome the silent filibuster (exacerbated by the refusal of traditionalists to change Senate rules to either eliminate or reduce the 60-vote threshold, or require the minority to actively filibuster pieces of legislation, thereby calling attention to their opposition) as well as political posturing by conservative Democrats like Sens. Joe Manchin (W.V.) and Kyrsten Sinema (Ariz.).

Trending
Tyler Perry: Madea is an LGBTQ ally, “as am I”

Among those promises was a pledge to LGBTQ Americans, to pass legislation, known as the Equality Act, that would prohibit discrimination in various aspects of life, including employment, housing, public accommodations, credit, and access to government services. The measure has passed the U.S. House of Representatives under Democratic control, but has failed to overcome the 60-vote threshold to start debate in the U.S. Senate. Biden made a nearly identical pitch in his address to Congress last year, to no avail.

“And for our LGBTQ+ Americans, let’s finally get the bipartisan Equality Act to my desk,” Biden said Tuesday night, before pivoting to criticize the proliferation of anti-LGBTQ measures in various state capitals, especially transgender youth who find themselves targeted by bans on gender-affirming care, classifications of such care as “child abuse” to the point where even verbally affirming a child’s gender identity could be enough to remove them from parents’ custody, and barring such children from participating in sports based on their gender identity.

“The onslaught of state laws targeting transgender Americans and their families is wrong,” Biden continued. “As I said last year, especially to our younger transgender Americans, I will always have your back as your President, so you can be yourself and reach your God-given potential.”

At least 195 state bills have been proposed in various state legislatures this year, 104 of which target transgender people and youth, with at least 77 bills seeking to ban classroom conversations or books touching on LGBTQ identity under the guise of “parental rights,” such as the so-called “Don’t Say Gay” bill in Florida.

While not explicitly mentioned, Biden’s speech underscored the urgency and need for action while Democrats remain in control (at least nominally, if not in actuality due to the filibuster) of Congress before a midterm election that most think will be disastrous for the party.  While this decade’s redistricting has generally been more favorable to Democrats than the last round of redistricting in 2011, Biden’s lackluster approval ratings, rising prices of goods, a weak rebound from the pandemic, and overall public perception that things are generally on the wrong track are all creating a confluence of events where Republicans are all but certain to seize the levers of government this November.

For LGBTQ people, that means at least two years of no additional progress in terms of federally enumerated rights while Republicans control Congress, and potentially more, if Republicans win the White House back in 2024 and begin repealing various legislative gains — assisted by a conservative Supreme Court that seems all too willing to carve out religious exemptions that would gut most state-level pro-LGBTQ laws, keeping them nominally in place but eliminating any enforcement mechanisms.

“As state politicians target young transgender Americans and Texas Governor Greg Abbott dangerously threatens parents for caring for their own children, President Biden tonight shared a bold and unequivocal message of support for transgender people and all LGBTQ Americans,” Sarah Kate Ellis, the president and CEO of the media advocacy organization GLAAD, said in a statement.

“LGBTQ people are in every family and community, of every race, religion and in every region of the country. GLAAD research shows the LGBTQ community’s concerns are America’s concerns too, including how we rebuild from the COVID-19 pandemic and heal from the severe toll on our mental and physical health,” Ellis added. “President Biden has delivered on commitments to include LGBTQ citizens in the promise of America. Every lawmaker at every level of government must commit to do the same, especially for LGBTQ families and children under attack. The state of our union is only as strong as our action and commitment to ensure no marginalized person is left behind. LGBTQ voters are more motivated than ever to hold elected officials accountable in the midterms.”

Kasey Suffredini, the CEO and national campaign director of Freedom for All Americans, thanked Biden for highlighting LGBTQ rights among the litany of domestic and international priorities the president believes need to be addressed.

“Discrimination against LGBTQ people, especially those of us who are transgender, still takes place too often in too many parts of the country. Transgender youth are facing attacks in an unprecedented way, illustrating just how much misunderstanding there is about who we are,” Suffredini said in a statement. “The Equality Act is common sense and widely supported legislation that would advance dignity and respect for all Americans. It’s time for U.S. Senators of both parties to enshrine our collective American values into law by working together to outlaw LGBTQ discrimination as soon as possible.”