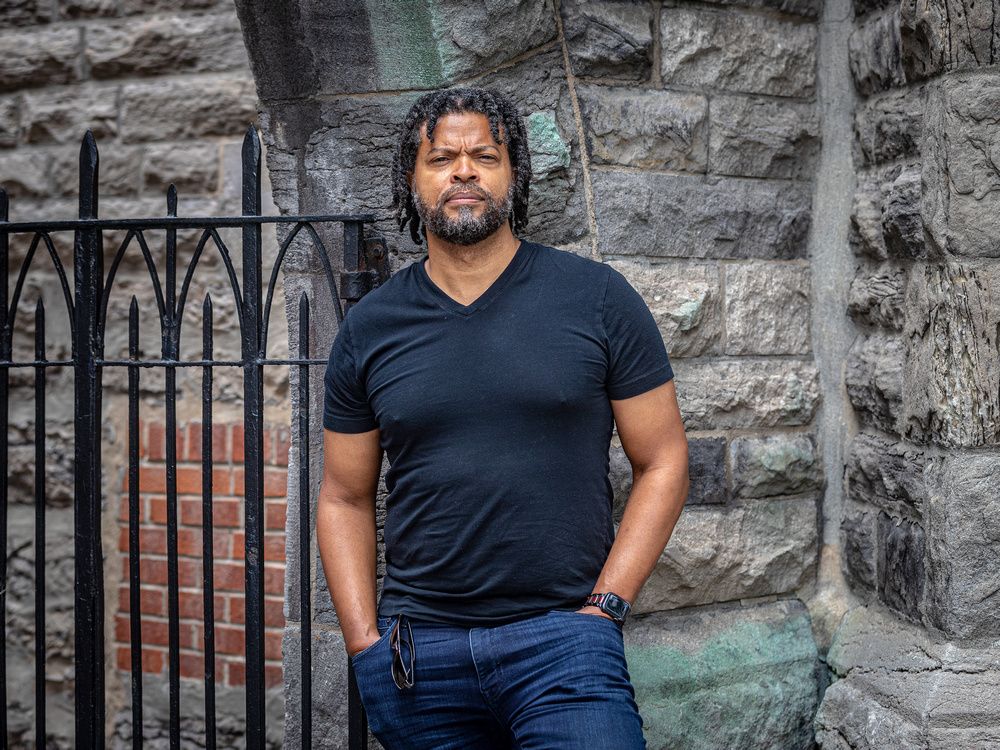 The documentary begins with this declaration: “Dear Jackie, I have always respected and admired you, a brother from the U.S., breaking the colour barrier in Major League Baseball. You started your ground-breaking journey to end segregation in sports right here in Montreal by joining the Brooklyn Dodgers farm team, the Royals, in 1946. … You made the impossible seem possible in a segregated North America. … But the white majority used this exceptional moment in history to spin a myth of a post-racial society. It was not.”

Jackie, of course, is Jackie Robinson. And as the intro should make clear, the documentary Dear Jackie is not a look back at Robinson’s historical rise on the diamond here but rather what impact it had at the time and now.

Shot in stark and highly effective black and white, the documentary takes both a searing and stirring look at life and racism in the city, past and present.

“Dear Jackie was three years in the making, but it had been on my mind for 25 years after seeing the NFB documentary Golden Gloves with local boxer Ronald Jones preparing for a tournament,” Pardo says. “I wanted to do something about jazz and sports. Then when I discovered Jackie Robinson, it all came together.”

In the last year, the Global TV documentary series BLK: An Origin Story, the CBC drama series The Porter and the Crave biopic Oscar Peterson: Black + White have also delved into the roots of Montreal’s Black history. Yet while spotlighting similar historical focal points, both highs and lows, Pardo decided to put more of his focus on several Black Montrealers, young and old, with different stories to tell but most culminating with all-too-familiar conclusions.

Jaz’Marie Whyne, an engaging elementary-school student, is far too young and innocent to be so keenly aware of injustice surrounding her.

On the other hand, choreographer Majiza Philip is all too familiar with injustice, having fought and won a cash settlement from the city after being arrested on obstruction and assault charges — for which she was acquitted. Her arm was broken by the police in the process and she suffered years of depression as a result.

Legendary dancer and teacher Ethel Bruneau recalls the days when jazz greats lit up stages downtown, but it wasn’t quite all glitter in the Black residential community that was to become Little Burgundy.

Try as she does to see the bright side, community leader and CKUT show host Pat Dillon-Moore has been left despondent by the lack of social change here: “I’m not angry … I’m just tired.”

Then there is Ivan Livingstone, one of the more fascinating city characters and among the most erudite nonagenarians around. A former Olympic speedster and Montreal Alouettes star, Livingstone soon learned that once he left the glorified sports world behind to become a teacher, he was viewed far differently outside the Black community. Disenchanted with dealing with racism, he moved to Africa for a spell, to feel what it was like to be part of the majority.

“I’m happy to see there have been various projects on Black history in Montreal, but I feel there can never be enough and I’m hoping to see more with different angles,” Pardo says. “A lot of people, baseball fans among them, want to know what was going on in the States and Canada as well when Jackie broke through here. He wasn’t just doing this for himself. He was fighting for all Blacks.”

Pardo was struck by the wide range of community members he encountered while shooting the doc.

“Honestly, every day I would run into somebody else who wanted to share their story. They all had their own takes on events. They were all so involved in their history. They wanted to pass along stories of their heritage and wanted them out there for others to see and hear.”

The sad reality is that most of their stories reflect a certain inertia on the progress front.

“That’s why I chose to shoot in black and white, to reflect that reality,” says Pardo, who gave up a successful acting career to make movies. “Things haven’t really changed over the years. They’re just a bit different.

“Many in the community, especially the youth, are still facing the same pressures from the police and others in positions of power. What we’re seeing over the years here are the same hopes and dreams community members have, but also, sadly, the same troubling social issues.”