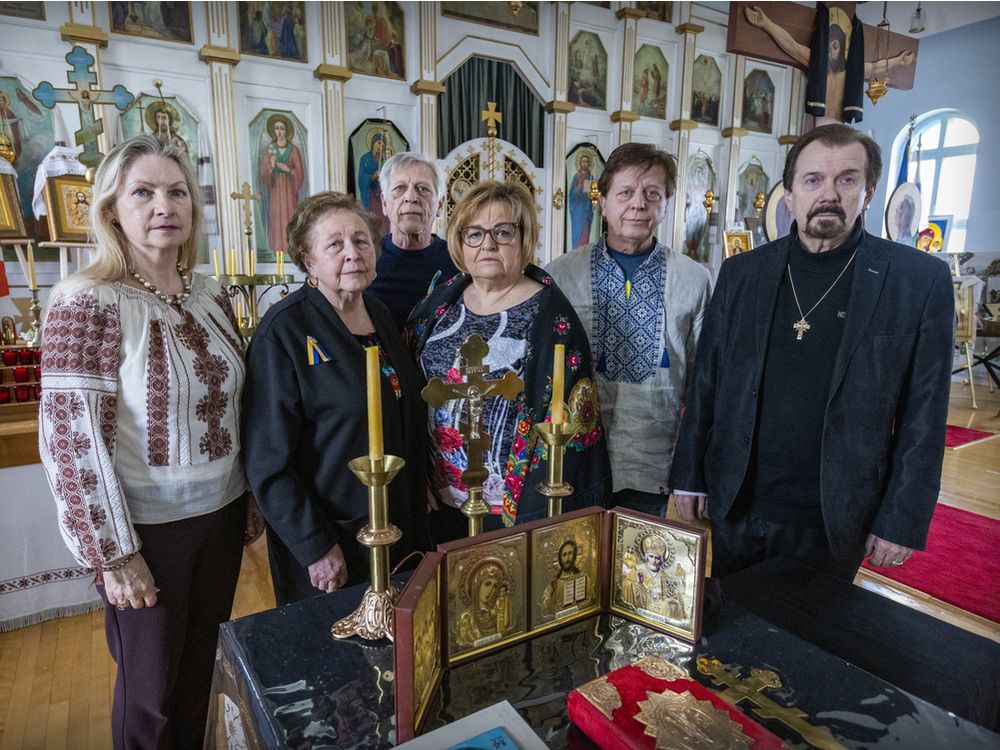 Valentina Hayduk was three at the time, but she still so vividly remembers everything: “We had the clothes on our backs, and that was about it.”

That was 70 years ago. Valentina and her parents, Ukrainian refugees, arrived in Montreal penniless and without prospects or family here. Their only lead was the Ukrainian Orthodox Church of St. George in Lachine.

The church took them in, set them up with lodging and work, and the family never looked back.

“We’re trying to pay it forward now,” Valentina says. “We were given an opportunity to make a life here and we did. Now we have the opportunity to bring in families who have been under siege and to show them the warmth we received and try to make them feel at home with a culture they know.”

Valentina, her two younger brothers born here, Volodymyr and Anatoly Hayduk, and their respective wives, Lili Mospan and Olga Katola, are meeting in the basement of the same church to monitor the movements of the first four families from Kyiv they’ve undertaken to bring here. They’re joined by the church’s Father Gene Ruditch.

“We’re concentrating on these families for now,” says Valentina, a former special-ed teacher. “We would like to bring in 20 families. But really our hope is to reach out to as many who knock on our door or who we can reach out to.”

“Through family connections, we got in touch with several families when the war started,” Olga says. “We told them it was getting worse, and that we heard Canada was opening its doors. We told them it would be better if they left. We knew their husbands couldn’t leave, because they had to stay behind to fight, but their wives and kids could. At first they resisted, saying they could never leave. But as the war worsened and their kids were becoming more traumatized, they realized it would be best to go.”

It‘s been a tough slog so far for the families. Three of the families — seven people in total — managed to reach Paris, after finding a way out of Ukraine and then embarking on arduous treks through Poland, Slovakia, the Czech Republic and Germany. But, sadly, they’re in limbo now.

“The Canadian government advertises its IRCC (Immigration, Refugees and Citizenship Canada) site, but it’s complicated,” Anatoly says. “The families are trying to fill out the application papers, but the problem is that they don’t speak the languages necessary to do that. Nor do they have laptops with them, just their phones which won’t work for this. We’re trying to get them computers.

“We’ve tried to get through to the Canadian application centre in Paris to discuss the situation to ask if we could fill out the papers for them, but they said we couldn’t. They just told us those were the rules. It’s even worse for those families stuck in their basements in Kyiv trying to apply but without power or internet.”

Canada certainly talks a good game when it comes to welcoming refugees with open arms.

“Canada condemns the war and promises so much help,” Volodymyr says. “There’s a lot of rhetoric, but there are just so many obstacles along the way, so much bureaucratic red tape regarding bringing refugees here. Bottom line is: if we want to get something done efficiently, we’ll have to do it ourselves. We can’t wait for the government. The sad reality is that things are really tense, particularly for the families still stuck in Ukraine. Imagine the horror for kids in having to live with constant shelling.”

Father Gene reached out to the Red Cross at the beginning of the invasion to offer refugee support: “They took my name and the information they needed, and they said they would get back to me. But since then, I’ve heard nothing. So now I’m thinking of using my own contacts to get through.”

“We just established a fund,” Lili says. “We may not have the financial means to bring in as many refugees as we would like, but through the fund and the efforts of volunteers and donors we are already making an impact.”

Restaurateur Joe Poulin, one such Good Samaritan and a friend of Valentina’s son Volodymyr, is covering the cost of hotels for the three families stuck in Paris. He will also cover their plane trips to Montreal once their applications are approved. And he has pledged to donate 1,000 free meals to Ukrainian refugees at his Good Reason resto on St-Patrick St.

“Joe is our angel, always at the ready to help out,” Olga says. “The refugees are responsible for making their way here, but they can’t afford the plane fare. They’ve been through such hell already. We have to make it easier for them to get here. So it’s really gratifying to see how even non-Ukrainians have been stepping up.”

Adds Valentina: “Today Ukraine is at the top of the news, but something else could pop up soon, even with the war still raging there, and attention will be shifted. The sad part is we can quickly forget heartbreaking tragedies taking place all over the world, and there are many.”

For more information about the Ukrainian Orthodox Church of St. George’s refugee efforts or to make donations, email v_hayduk@hotmail.com or call 514-630-0160.