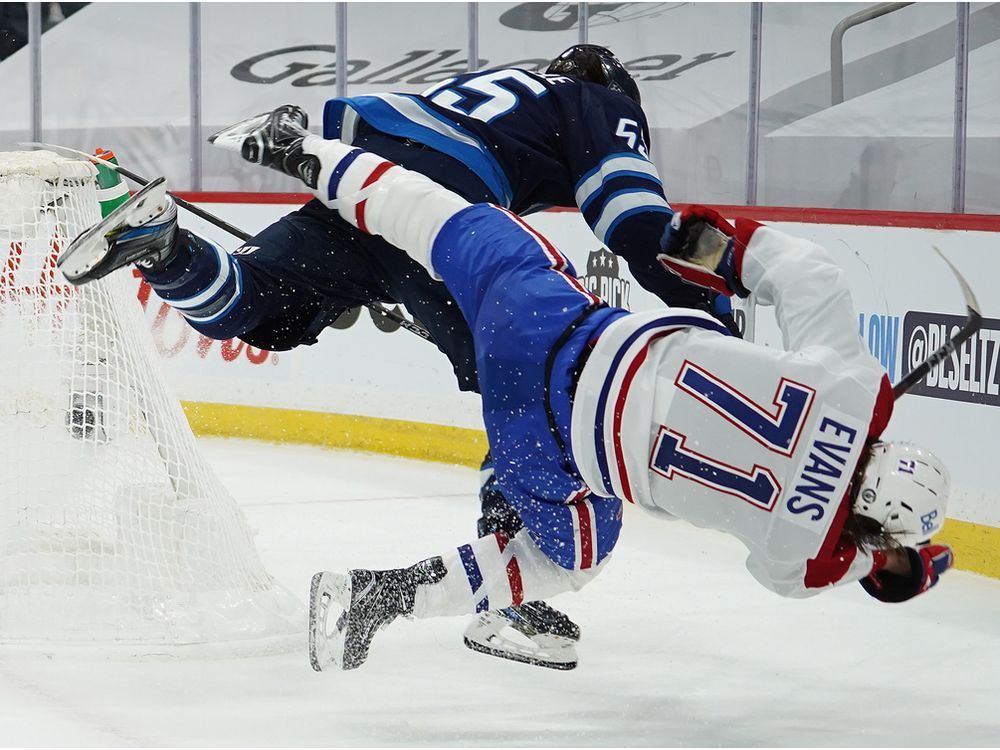 Rematch of last year’s second-round playoff series and Habs have chance to win six in a row for first time since 2016-17 season.

Playoff rematch: This will be the first game between these teams since the Canadiens won 3-2 in overtime last June 7 at the Bell Centre to sweep a best-of-seven, second-round playoff series. Tyler Toffoli scored in OT for the Canadiens. This will also be the first game between the Canadiens’ Jake Evans and the Jets’ Mark Scheifele since Game 1 of that playoff series. Evans was carried off the ice on a stretcher after a vicious hit from Scheifele after scoring an empty-net goal in the final minute. The NHL suspended Scheifele for four games, calling it “a high, predatory hit.” Sam Montembeault will start in goal for the Canadiens.

Five-game win streak: The Canadiens, coming off a 2-1 win Saturday in Ottawa, are on a five-game win streak for the first time since the 2017-18 season, between Nov. 25 and Dec. 2. The Canadiens beat the Red Wings 10-1 at the Bell Centre for their fifth straight win that season with Paul Byron getting a hat trick. The last time the Canadiens won six in a row was during the 2016-17 season, between Feb. 25 and March 7. The Canadiens beat the Canucks 2-1 in Vancouver for their sixth straight win with Torrey Mitchell and Byron scoring the goals.

Road trip: This is the first game of a four-game Western Canada road trip for the Canadiens, who have a 5-3 record since Martin St. Louis took over from Dominique Ducharme as head coach. Only two of St. Louis’s first eight games as coach have been on the road and the Canadiens have won both. “As a player, I used to love going on the road with my teammates and probably getting a little more sleep with young kids at the time,” St. Louis said Monday. “Hopefully, my wife’s not listening. But it’s a chance for me now as a coach to be with my staff, the trainers, the equipment guys and just get to know each other a little bit and have fun.”

Jets end slump: The Jets ended a four-game winless streak (0-3-1) with a 5-3 victory over the Coyotes in Arizona on Sunday. The Jets are 4-4-2 in their last 10 games and are in sixth place in the Central Division. This will be the first of four straight home games for the Jets, who have a 13-10-1 record at the Canada Life Centre. “We can look ourselves in the mirror right now,” former Canadiens defenceman Nathan Beaulieu said about the Jets. “We know where we’re at. Montreal, or if we’re playing Chicago or New York, it doesn’t matter who we’re playing. We need two points. That’s the bottom line of it.”

Another new coach: The Jets had a 13-10-5 record when head coach Paul Maurice resigned on Dec. 17. “They need a new voice,” Maurice said at the time, when the Jets were 4-7-2 in their previous 13 games. “They need somebody to help them get to that next place. It’s the right time for it, and I know that.” Assistant coach Dave Lowry took over as head coach and the Jets have a 10-11-1 record under him.