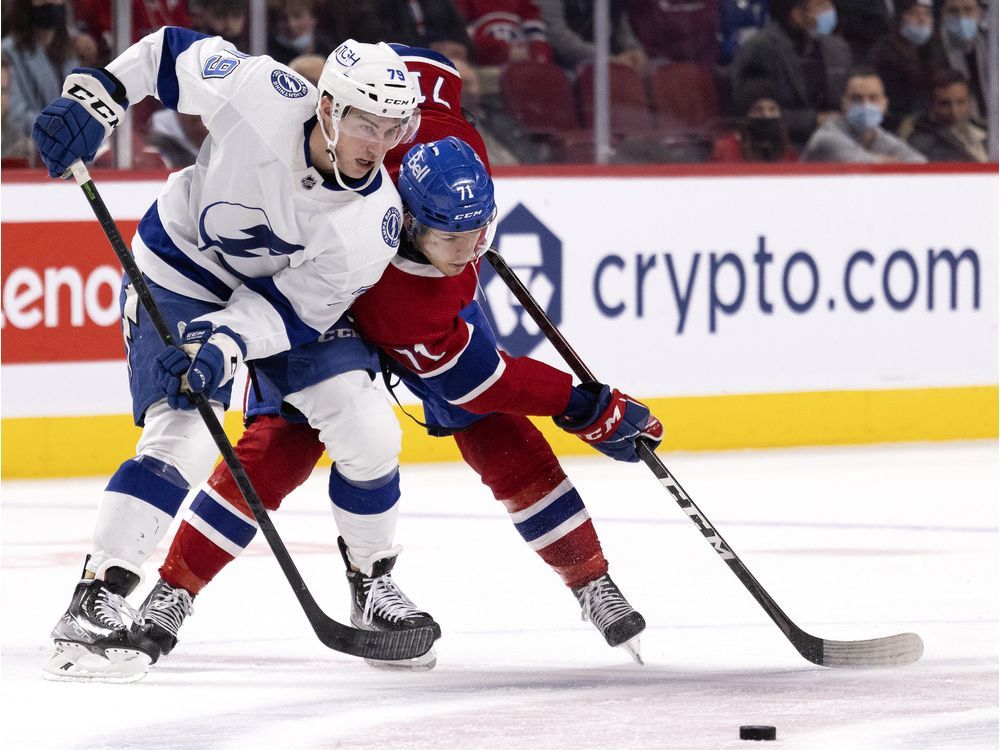 The matchup: The Canadiens are 0-2-1 on their four-game road trip after dropping a 4-0 decision to the Carolina Hurricanes on Thursday and, the good news for those hoping the team has the best odds of winning the NHL draft lottery, they are again dead-last in the overall standings. They face another tough test in the Lightning, which has won the last two Stanley Cups. Tampa Bay is on a four-game winning streak and moved into second pace in the Atlantic Division after beating Chicago 5-2 on Friday. Tampa Bay has 92 points and is one up on Toronto and three ahead of the surging Boston Bruins (89). Tampa Bay has beaten Montreal in their two previous meetings this season, but both games were decided by one goal.

Welcome back Marty: Canadiens coach Martin St. Louis established his Hall of Fame credentials while playing for the Lightning. He led Tampa Bay to a Stanley Cup in 2004. He won the Hart Trophy as the NHL’s most valuable player, as well as the first of two scoring titles that season. On Friday, St. Louis said the team had fallen into disarray, but has been revitalized by owner Jeff Vinik. He praised Vinik for developing the area around Amalie Arena for enhancing the game-day experience for the fans.

Double trouble in goal: The Canadiens get a break — but only a little one — if Tampa coach Jon Cooper gives goaltender Andrei Vasilevskiy the night off after he played Friday against Chicago. Vasilevskiy has owned the Canadiens with 12-1-2 career record and a 1.98 goals-against average. The bad news is backup Brian Elliott is no slouch with an 8-3-1 career  record against Montreal. The Canadiens are expected to give Jake Allen his eighth start in nine games since he returned from more than two months on the injured reserve list with a groin injury. Allen hasn’t had any time to relax because the Canadiens have given up more than 40 shots in each of his last five starts.

Harris makes his debut: There will be several lineup changes for the Canadiens and the most significant will be defenceman Jordan Harris’ pro debut. He signed a two-year entry level contract after finishing his college career at Northeastern and he’ll burn the first year of that deal when he lines up alongside David Savard on Saturday. There will be a new No. 1 line as Rem Pitlick joins Nick Suzuki and Cole Caufield, who was named the NHL rookie of the month for March on Friday. And Ryan Poehling will return to the lineup after missing nine games with an upper-body injury. He’ll replace Laurent Dauphin on the fourth line.

Stamkos leads the way: Steven Stamkos scored his 31st goal Friday and leads the Lightning in points with 75. Victor Hedman is among the top defensive scorers in the league with 19 goals and 45 assists. The only other 20-goal scorers are Brayden Point with 26 and West Island product Alex Killorn with 21. Former Canadiens prospect Mikhail Sergachev, who was traded to the Lightning as part of the Jonathan Drouin deal has six goals and 27 assists. Corey Perry, who helped the Canadiens reach the Stanley Cup final last year, has 16 goals and 17 assists. Defenceman Ryan McDonough is out indefinitely with an upper-body injury.