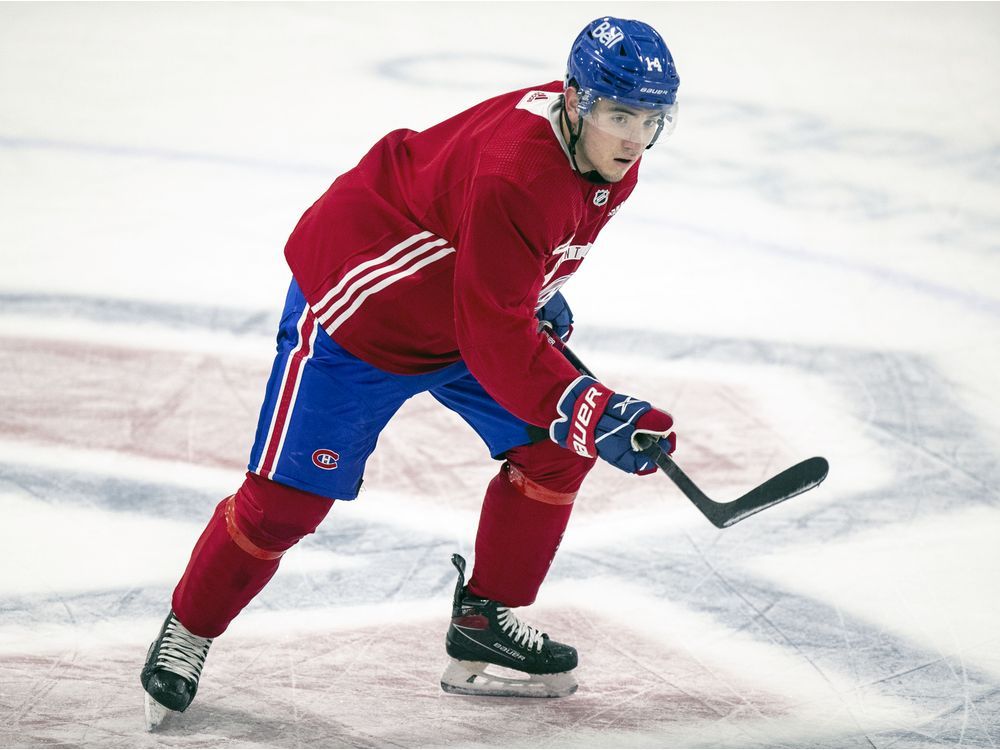 General manager Kent Hughes has said the Canadiens will have a new captain before the start of next season.

It wouldn’t be a shock if Nick Suzuki gets the nod after a season in which Shea Weber was the absent captain, sidelined by injuries and remaining home in Kelowna, B.C.

Suzuki will turn 23 in August and will be heading into his fourth NHL season. It will also be the first season of his new eight-year, US$63-million contract with an annual salary-cap hit of $7.875 million.

While it might seem like a lot of pressure to put on such a young player, there is no doubt Suzuki has become a leader on this team. He also seems to have the maturity and personality to handle whatever is thrown his way.

“It’s kind of changed throughout the whole year,” Suzuki said after practice Monday when asked about his leadership role on the team. “At one point, we didn’t have many of our older guys and guys that have played a lot of games. So at that point I had to speak up a lot more. We had a really young team and just wanted to try to help the younger guys and the guys that haven’t played that much in any way I could. But now we have kind of a full roster and just kind of do my own thing, lead by example, speak up when I feel like I need to.

“It’s kind of always been natural for me,” Suzuki added about his leadership skills. “More lead by example kind of guy. Not yelling at everyone when we’re on the bench that much. But I feel like I can pick my points where I can speak up and get my point across.”

Suzuki is hoping Martin St. Louis will be back as head coach next season and at this point it would be a shock if he doesn’t return behind the bench.

“I think we built a lot ever since he came in,” Suzuki said about St. Louis, who replaced Dominique Ducharme as head coach on Feb. 9. “Our game has turned around. It’s been a lot more fun to play. When we kind of had our full roster before the trade deadline we were on a pretty good roll and after the trade deadline we lost some key guys. We’ve tried to find our new identity after that. But it’s been a lot of fun coming to the rink. Everyone enjoys Marty as their coach. For me, personally, he’s been a lot of help and hopefully he can come back.”

The Canadiens have a 12-15-4 record since St. Louis took over (they were 8-30-7 with Ducharme) and have lost their last five games. While Ducharme stuck to his system and was determined it could work — which led to his downfall — St. Louis believes in concepts instead of systems.

“Kind of the biggest thing he’s been preaching is he wants to coach the guys without the puck and that’s going to make the guys with the puck have more options, better options,” Suzuki said about St. Louis. “Knowing where everyone is going to be and for me with more of a playmaking style that’s great for me just to know where everyone’s going to be on the ice. Trying to teach everyone how he sees the game, which obviously is advanced, and we’re still working on that. But ever since he’s brought those concepts in you see guys making a lot more smaller plays, supporting each other and it’s helped out a lot.”

Price back in goal

Canadiens goalie Carey Price will make his second start of the season Tuesday night against the Minnesota Wild at the Bell Centre.

Price stopped 17 of the 19 shots he faced in last Friday’s 3-0 loss to the New York Islanders at the Bell Centre with the final goal going into an empty net. It was Price’s first game since having knee surgery last July to repair a torn meniscus, followed by 30 days in the NHL/NHLPA player assistance program in October to deal with substance-use issues.

The Canadiens have six games left in the season and Price was asked how many of those games he might play.

“I got a bit of an idea, but it’s going to be kind of a day-to-day type of thing,” he said. “I haven’t seen a lot of reps in games. I still feel like my conditioning level could increase. So it’s all going to be how I feel the next day after.”

Price is also getting used to a new goalie coach. His longtime goalie coach, Stéphane Waite, was fired during the second intermission of a game last March, replaced by Sean Burke, who was named director of goaltending. Éric Raymond was hired as the new goalie coach during the off-season.

“It’s been good,” Price said about his relationship with Raymond. “I had a great relationship with Steph over the years. We were so seamless by the end of it we just knew what we were going out there to do for the day. A relationship is built over time and I haven’t really had a lot of time to work with Éric yet. Just over the last few weeks I’ve really gotten a chance to do some on-ice work with him. There’s a bit of a goalie language that we have to learn in our ways of communication. It’s still a work in progress. I like the work that we’ve done together, though, so far.”

Samuel Montembeault allowed eight goals on 41 shots in Saturday’s 8-4 loss to the Washington Capitals at the Bell Centre as his record fell to 7-17-6 with a 3.78 goals-against average and a .891 save percentage.

“I think he’s a great goalie,” Price said about Montembeault. “I watch him in practice and he’s a big body. He reacts well, moves really well for a big guy. I think we could play better in front of him. But, at the end of the day, I think he’s a very good goaltender.”

Looking at the minus side

St. Louis noted it’s not surprising for a player on one of the NHL’s worst teams to have such a bad plus/minus, adding that empty-net goals against come into play as well as the fact the Canadiens have often been chasing games from behind this season, meaning players take more risks.

“It’s kind of a stat that no one really wants to be in the minuses,” Suzuki said. “It’s been a rough year for that for me. We’ve given up a lot of empty-net goals and stuff like that, but still last game we were on for too many goals against and that can’t happen when we’re playing against good players like that. So we knew as a line that we had to clean that up during the game. Move forward and try to be better.”

Suzuki was minus-3 against the Capitals.

“It’s a stat — it’s not the whole story,” St. Louis said about plus/minus. “Like all the stats and all the data, the analytics, it’s a part of the story. But, honestly, I haven’t looked at it much this year, to be honest. Is it something I’ll pay a little more attention when we start next year? Yeah, I probably will.”

The NHL Player Safety Department announced Monday that Canadiens forward Michael Pezzetta has been suspended for two games for an illegal check to the head of Washington’s T.J. Oshie during Saturday night’s 8-4 loss to the Capitals at the Bell Centre.

Montreal’s Michael Pezzetta has been suspended for two games for an Illegal Check to the Head on Washington’s T.J. Oshie. https://t.co/AOkhrJBlnM

Answering the call for Canada?

Suzuki was asked after practice Monday if he would be interested in playing for Team Canada at the IIHF World Championship, slated for May 13-29 in Finland.

“Yeah, I’d definitely consider it,” he said. “Playing for Team Canada is always an honour. I haven’t heard anything yet. So I guess we’ll see when that time comes and I’ll have to make a decision on it.”

Price was also asked if he would have interest in playing for Team Canada.

“It’s hard to make that call right now,” the goalie said. “I’m going to say it’s unlikely kind of given the way things have gone over the year. … It’s something I would like to do. I never had the opportunity to go to the world championships and that’s something that I’ve always wanted to do. But I don’t know if right now is going to be the right time to go.”

Here’s how the forward lines and defence pairings looked at practice: