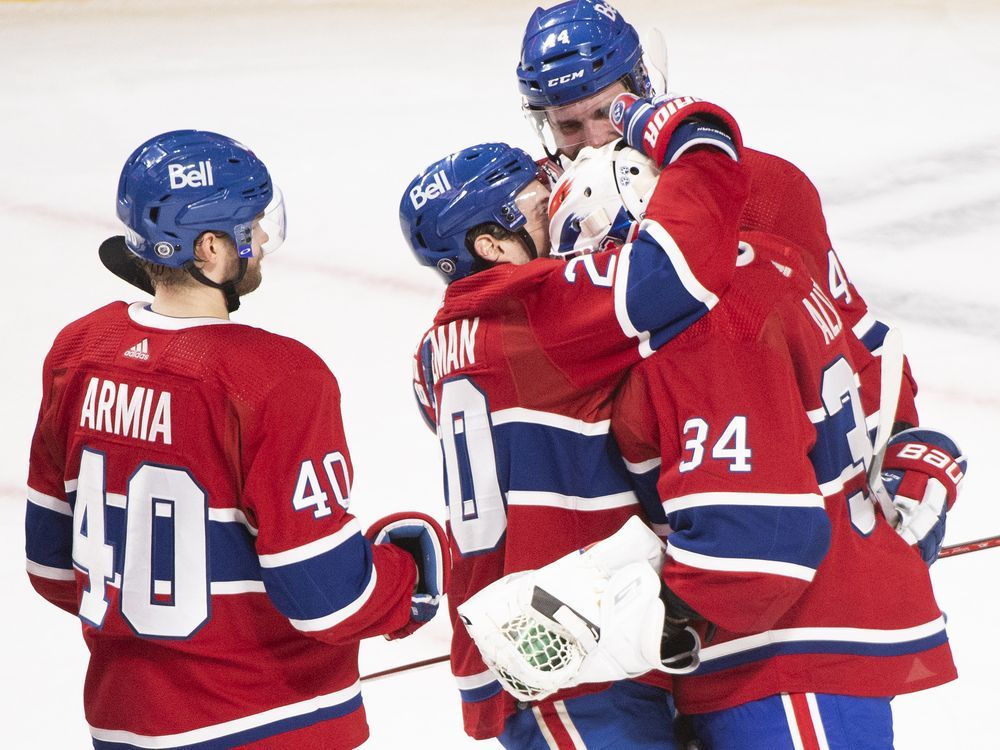 The Bell Centre has not been a happy home for the Canadiens for much of this season.

It became a lot more joyful Saturday night in front of only the third sellout crowd of the season (21,105).

The Canadiens got goals from David Savard, Cole Caufield, Paul Byron and Christian Dvorak (empty-netter) to beat the Toronto Maple Leafs 4-2 on Hockey Night in Canada. Jake Allen was outstanding in goal as the Leafs outshot the Canadiens 51-18.

Auston Matthews and William Nylander scored for the Leafs.

The Canadiens (18-37-10) have been officially eliminated from the playoffs, but beating the Leafs at home on a Saturday night will always be special — even when Toronto (40-19-5) is still 39 points ahead of Montreal in the standings.

The win moved the Canadiens out of last place in the NHL standings — two points ahead of the Arizona Coyotes — and improved their home record to 10-19-4. The only team in the NHL with a worse home record is the Coyotes (9-22-1).

Last season, when the Canadiens advanced to the Stanley Cup final, they only had a 13-11-4 record at the Bell Centre during the regular season. The previous season, their home record was 14-17-6.

Long gone are the glory days when the Canadiens would totally dominate on home ice at the old Forum. When Montreal won four consecutive Stanley Cups from 1976-79, they only lost 14 regular-season home games during that span — and only one in 1976-77 when they went 33-1-6 at the Forum. Their overall regular-season record for those four seasons at the Forum was 126-14-20.

“I think it’s important to be good, period, whether you’re on the road or at home,” Canadiens head coach Martin St. Louis said after a practice earlier this week. “I think at home you have the energy from your crowd.

Shortly after the puck dropped to start Saturday night’s game there was a loud “Go Leafs Go!” chant with a large contingent of Toronto fans in town. Montreal fans were able to drown them out with a “Go Habs Go!” chant.

Only 36 seconds into the game, Matthews had the Toronto fans celebrating when he scored his 47th goal of the season, matching his career high set in 2019-20. Matthews has 18 games left to try and break the Leafs’ single-season record for goals set by Rick Vaive in 1981-82 when he had 54.

The Leafs outshot the Canadiens 12-3 in the first period, but the score remained 1-0 at the intermission thanks to Allen.

A loud “Go Habs Go!” chant started just over three minutes into the second period and seconds later Dvorak appeared to tie the game when he scored. But a video review ruled the play was offside and the goal didn’t count.

Defenceman David Savard did tie the game when he scored on a beautiful setup from Laurent Dauphin at 9:44 and Cole Caufield gave the Canadiens the lead when he scored a power-play goal on a wicked wrist shot at 18:08. It was Caufield’s 14th goal of the season and his 13th in 20 games since St. Louis took over.

Caufield celebrated his goal in front of a fan wearing a Leafs sweater in the first row behind the glass who was giving him a thumbs-down.

The shots were 27-15 for the Leafs after two periods, but the Canadiens had the lead going into the third. The Canadiens were also missing forwards Michael Pezzetta and Tyler Pitlick, who suffered upper-body injuries and remained in the locker room.

Nylander tied it up for the Leafs when he scored a power-play goal at 7:33 of the third period, but the Canadiens kept battling despite being down two players and also missing assistant coach Luke Richardson, who was placed in COVID-19 protocol earlier in the day. Byron scored the winning goal at 17:32 before Dvorak added his empty-netter at 19:37 to send Canadiens fans home happy.

St. Louis still has a lot of work ahead of him turning this Canadiens team around, but he has done a remarkable job so far.

A win at home on a Saturday night against Toronto is another big step.