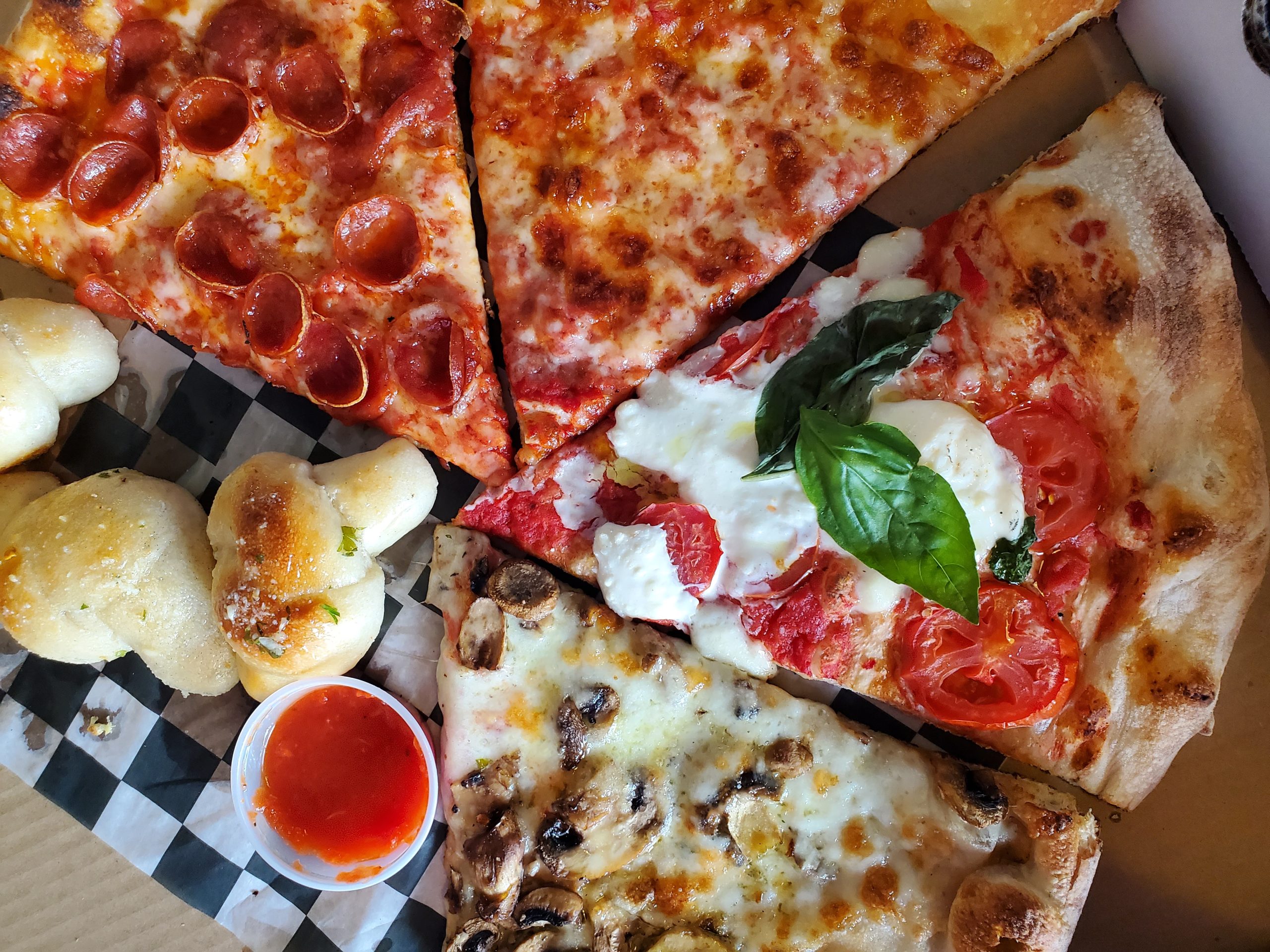 Slice & Pie, an Italian-owned pizzeria, operates just off the U Street NW corridor. Chef and owner Giulio Adriani, who was born and raised in Rome, opened the storefront in March 2022 at the corner of 14th Street and Florida Avenue NW. He learned to cook from his grandmother and developed a love for pizza after his father pressured him to get a job to fund his surfing career when he was younger.

With 30 years of cooking experience, Adriani is certified as an authentic Neapolitan Pizza Master by the Associazione Verace Pizza Napoletana and the Associazione Pizzaiuoli Napoletani. He opened three restaurants in Italy before moving to New York 12 years ago, then opened and managed a few restaurants in the Big Apple before making his way to D.C. Along the way, he also worked with “Cake Boss” Buddy Valastro to open a Las Vegas pizzeria called Pizza Cake and became a Guinness World Record holder in 2016 for the world’s longest pizza, measuring 1.3 miles long.

This slice joint has a fun black, light green, and hot pink branding. Pink and white neon signs are posted above the entrance, displaying “Slice & Pie” and “Eat Me”. Whole pizzas are on display at the counter, with drinks in a refrigerator behind the cashier and the menus on digital screens above the counter space. Cooks can be seen in the open kitchen, assembling pizzas and making fresh dough. The kitchen space is shared with Lucy, which Adriani also owns. There are a couple of tables for dining in.

The menu is all about classic pizzas, sold as whole 18-inch pies or slices. Most are New York-style pizzas, but square pies are also available—the Detroit and the Sicilian styles are made with the same dough. Both have a thick, focaccia-like texture, but are assembled and baked differently. The Detroit style has its toppings spread to the edge with a crispier bottom. The Sicilian has a softer bottom and a slightly thinner crust.

I’m a thin-crust type of girl and went for their most popular New York-style slices, which are all made with tomato sauce and fresh mozzarella. The burrata pizza is baked with sliced tomatoes, before being garnished with chunks of the fresh burrata, basil, grated Parmesan, and a drizzle of olive oil. The mushroom pizza is one of their white pizzas made with a Parmesan cream sauce, mozzarella, garlic, truffle oil, and marinated cremini mushrooms. I appreciate that the truffle oil wasn’t overpowering—many places can get heavy-handed.

Keep it classy and not trashy by ordering the cheese and pepperoni slices, made with mozzarella and provolone. These two slices were my favorites. There wasn’t so much cheese that you couldn’t taste the rich pizza sauce. The pepperoni were sliced thin enough to curl a bit when baking, creating those slightly crunchy “pepperoni cups” we all love.

The pizza dough and sauces are made in house. The cooks blend canned San Marzano tomatoes with Californian tomatoes to make their pizza sauce. Each pie is baked in a stone oven at 540 degrees. You get that nicely toasted bottom crust, making for a sturdy slice. If you’re someone that loves pizza because of the dough, Slice & Pie is a winner. I’m guilty of not always eating the crust (unless I’m inebriated), but this one was too good to not finish. Yes, I was sober eating these pizzas.

If you’re looking beyond pizza, Slice & Pie has a “Not Pies” section on the menu. Their Caesar salad has a Parmesan crostini, and anchovies or pan seared chicken can be added for an up-charge. The garlic knots are made with the New York-style pizza dough, sprinkled with grated pecorino cheese, and served with a side of tomato sauce for dipping.

There are also beef meatballs cooked in a tomato sauce, a recipe from Adriani’s grandmother, sold on their own or as a sub. “It’s good. But we don’t sell it much. Everyone is here for the pizza, because of our name …”, Adriani says. Let me just say his grandma knew what she was doing … these are some damn good meatballs. They were extra soft and juicy, even as a sandwich. The pizza dough also serves as bread for the sub. There’s that crunchy exterior with a soft and fluffy center, which was perfect for the meatballs.

Some canned beers and glasses of wine are available for dining in or to go. Sparkling water and sodas are the non-alcoholic options. To keep things fun, they do a weekly giveaway where they randomly select a pair of initials, displayed on their menu board. If your initials match, you get a free slice of pizza!

Slice & Pie’s pizza reheats very well. Even after two days in the fridge, the mushroom slice I had leftover was just as good as trying it the first day. Throw them in a hot oven, or in a skillet, to get the same effect as a fresh slice.

There are several pizza spots on U Street NW, which has always been perfect for those looking for a quick bite for lunch, or during the late night hours. I recommend walking a few blocks north and experiencing a slice made by a literal professional at Slice & Pie.

Slice & Pie is located at 2221 14th St. NW. Hours are Monday through Thursday noon to 1 a.m., Friday and Saturday noon. to 3 a.m., and Sunday noon to midnight. Orders can be placed in-person, online, over the phone, and through most third party delivery apps. Prices range from $4 to $30.