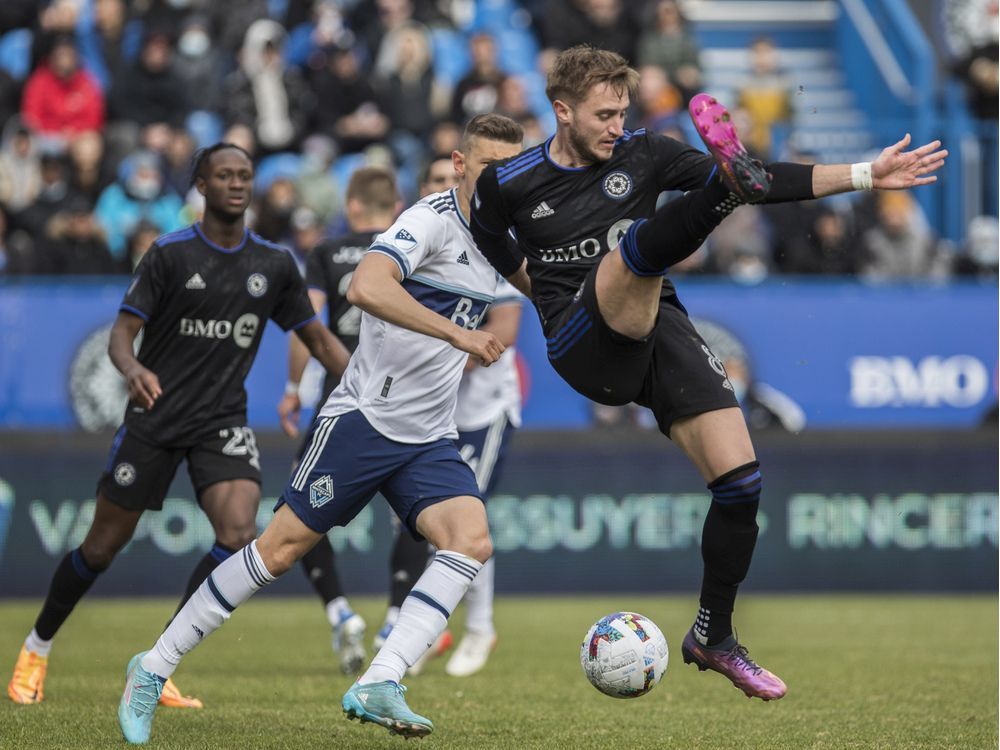 Teams that live by the sword will, in all likelihood, eventually die by the same means. It’s only a matter of time before the inevitable occurs.

CF Montréal is on a roll following Saturday afternoon’s 2-1 victory over the struggling, yet pesky, Vancouver Whitecaps in its Saputo Stadium debut — the first all-Canadian confrontation this season in MLS.

CFM began its season with three successive defeats, but has now won its last three — the first two on the road — and is undefeated in four, bringing its season record to 3-3-1. Suddenly, there’s some life in manager Wilfried Nancy’s side heading into a daunting challenge, next Saturday on the road, against Philadelphia.

Nonetheless, CFM continues living dangerously and seems slow to learn from its mistakes.

This streak began almost one month ago, with a 3-3 draw on the road against Atlanta United — the visitors somehow managing to squander a late two-goal cushion against a team reduced to 10 men.

And it almost occurred again against the Whitecaps, who recovered from a two-goal deficit and thought they had the equalizer in the final minute of second-half stoppage time. Substitute Tosaint Ricketts completed a three-way play with a brilliant header, looped over the head of goalkeeper Sebastian Breza.

But while Vancouver players were busy celebrating, referee Nima Saghafi was on the sideline, conducting a video review, ultimately concluding the play was offside. It was the second Whitecaps goal denied on the day — a club desperately requiring three points returning home with none.

In other words, CF Montréal dodged a bullet despite seemingly being in control.

“There’s a lot of debate about (video review),” Canadian international Alistair Johnston said. “At the same time, when it comes to offside, it’s pretty clear. You’re either offside or onside. In this case, he was offside and they made the right call. We’re happy, obviously. You could say we got a little bit lucky, but that’s the game.

“There’s still some shaky moments, especially in those second halves,” Johnston continued. “We want to get to the point where we’re up 2-0 at home and we’re pushing for the third to kill the game rather than being on the receiving end of having to deal with an onslaught. We were too much on the back foot there. That’s the next progression for us. At the same time, you can’t be mad with three points.”

Some spectators barely had time to get settled before Djordje Mihailovic opened the scoring in the second minute, converting Johnston’s high chip to him. Mihailovic was CF Montréal’s most valuable player in 2021 and, with four goals already this season — tying his career high — could be poised to become this year’s recipient as well.

When Honduran international Romell Quioto made it 2-0 only 90 seconds into the second half, that should have taken the wind out of the Whitecaps’ sails. But Vancouver manager Vanni Sartini made some deft substitutions, the visitors beginning to seize control against a team that must learn to better control matches while putting the finishing touches on them.

A Lucas Cavallini goal was ruled offside in the 62nd minute before Brian White’s score in the 65th counted. The Whitecaps continued attacking in waves, the insertion of Ricketts in the 88th nearly paying huge dividends. Instead, it was a fourth consecutive road defeat for Vancouver, now 1-5-1.

“It’s tough not to go from being on the front foot to just absorbing a little bit,” Johnston explained. “It’s just that mentality that happens, no matter who you are or what team you’re playing. It’s tough not to sit back a bit, especially when you go up 2-0. With our style of play it can be really dangerous.”

CFM, Johnston elaborated, wants to be a possession team that takes risks playing from the back while keeping the opposition on edge. Stop doing that and it ends up getting pinned defensively and begins to scramble.

“I don’t like when we force things,” Nancy said. “I’m not blaming the players; I know they want to do well. I’m going to help them read the game a little better. We lacked control of the game at times. Attacking means recognizing the moments and managing the game.

“We want to defend well, but we couldn’t do that because we didn’t have ball possession. We gave Vancouver the possibility to come back.”

Still the glass, it must be said, remains half-full for CFM, which has now erupted for 11 goals in four games. And, while work remains on its defensive coverages, it still marked a second consecutive match in which only one goal was surrendered.