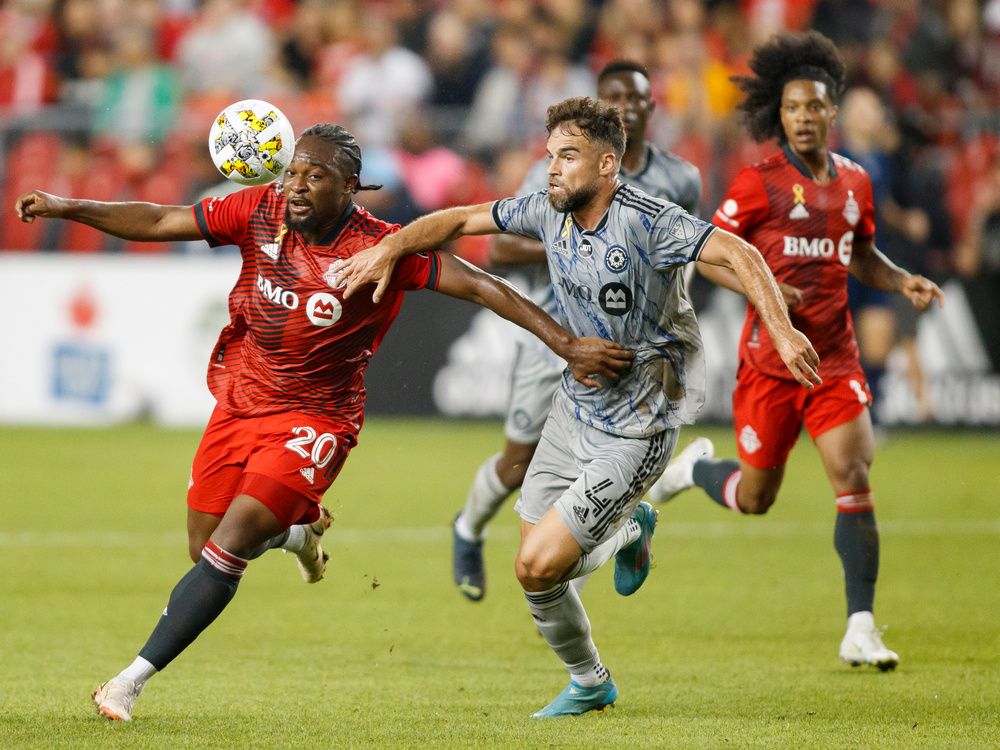 A dramatic 4-3 come-from-behind road win over rival Toronto FC Sunday moved CF Montreal one step closer to securing the home-field advantage for at least the first two rounds of the MLS playoffs.

With five games remaining in the regular season, CFM is a long shot to close the eight-point gap on Eastern Conference juggernaut Philadelphia, but the win at BMO Field moved CFM five points clear of New York Red Bulls with a game in hand and seven up on New York City FC.

It appeared that CFM was in for a long night after Federico Bernardeschi scored on a penalty in the fourth minute and fellow Italian Lorenzo Insigne made it 3-0 in the seventh minute.

But Kamal Miller cut the deficit in half when he scored on a rebound of Kei Kamara’s shot in the 19th minute and Djordje Mihailovic tied it two minutes later as CFM took a quick free kick and Mihailovic had room to launch a 30-yard drive that went off goalkeeper Alex Bono’s fingertips.

Kamara scored in the 43rd minute as CFM became the first MLS team to erase a 2-0 deficit and lead at halftime since Toronto did it against NYCFC in 2015.

Joel Waterman’s long-distance pass found Kamara, who took advantage of sloppy defence by Chris Mavinga to work his to the goal and slip the ball between Bono’s legs. It was 38-year-old Kamara’s 136th career goal, third on the league’s all-time scoring list behind Chris Wondolowski (171) and Landon Donovan (145).

Alistair Johnston scored what proved to be the winning goal in the 54th minute.

“It was a massive win,” Miller said. “It helped that our two goals were scored early. We get stronger as games go by and we knew we would have chances to fix the errors we made. This was important for our playoff push. We felt disrespected going into this game. We wanted to make a statement and prove that we are a strong team and we did that tonight.”

“Today I didn’t have the chance to try to push them to come back, they did it by themselves,” said CFM coach Wilfried Nancy. “This is why we are here today.”

CFM was coming off a 1-0 midweek loss to the visiting New York Red Bulls. Before that defeat, Montreal had gone unbeaten in eight games (6-0-2). That run began with a 1-0 win over visiting Toronto and featured four clean sheets.

The loss dealt a blow to Toronto’s playoff hopes. They remain four points out of seventh place. TFC had lost just one of eight games (4-1-3) since Insigne and Bernardeschi made their MLS debuts July 23.  With the win, CFL is unbeaten (4-0-1) in its last five games against Toronto and it continued its success on the road this season. The win Sunday was a club-record ninth on the road and CFM has also set road records for points (29) and goals (29).

Ismaël Koné was among the substitutes for CFM after a transfer to English Championship League team Sheffield United didn’t pan out last week. Sheffield United had sought the 20-year-old Koné as a replacement for Sander Berge, but the deal was scrapped after the Norwegian international’s move to Belgian side Club Brugge fell through. Koné substituted for Mihailovic in the 66th minute.

CFM is back in action Friday when the Columbus Crew visits Saputo Stadium.