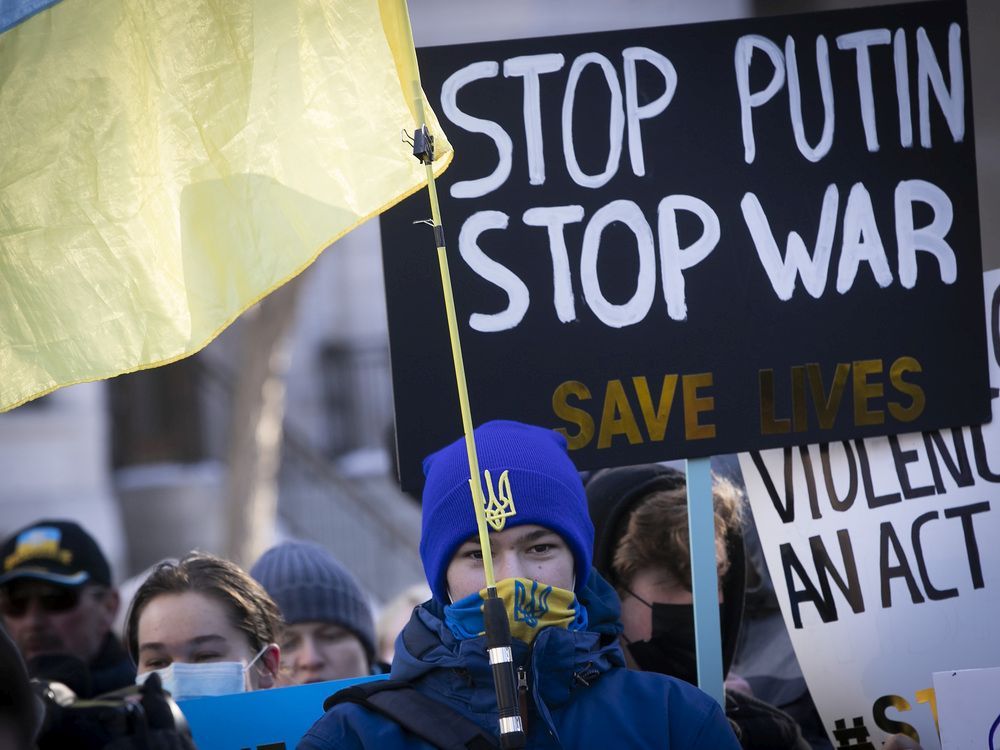 As initial talks between Russia and Ukraine ended without result Monday, experts in Montreal were sombre about the chances of a settlement.

“It’s a brutal return to the 19th century, where might takes precedence over right,” said Michel Fortmann, an honorary professor and lecturer in political science at the Université de Montréal.

“Things will not be decided by negotiation and liberalism, but by blood and iron,” he added.

When Russian President Vladimir Putin said Sunday that he was putting his nuclear forces into “special combat readiness,” it marked a return to rhetoric of the Cold War, said Fortmann, a specialist on armed conflicts and nuclear strategy.

“In the 30 years since the end of the Cold War, at no time has the nuclear threat been brandished either by the United States or by Russia. So it’s really a first,” he said.

Putin’s intention in raising the nuclear threat was to warn Western countries not to intervene, Fortmann said.

So far, however, Putin has been losing the battle of public opinion.

“What I’m seeing is that the effect of the Russian aggression is the exact opposite of what Mr. Putin wants,” he said.

“What we’re seeing is really a mobilization of public opinion and a reinforcement of the determination of other nations,” Fortmann added.

He pointed, for example, to Switzerland’s unprecedented decision Monday to depart from its long tradition of neutrality by freezing Russian financial assets in the country. On Sunday, Germany signalled an abrupt about-face on military spending, announcing funding to re-equip its armed forces would increase to more than 2 per cent of GDP.

“So it is really having the contrary effect, of strengthening the collective will, so Mr. Putin’s bet is not paying off,” he said.

The fact that Ukraine did not immediately crumble under the Russian assault has weakened Putin’s momentum, Fortmann added.

“Every day that Ukraine resists Mr. Putin is a defeat for the Russian president,” he said.

The conflict marks the first war between the two countries, whose history is closely entwined, said Yakov Rabkin, a professor emeritus of history at the Université de Montréal.

“There has never been a war between these two countries for the simple reason that Ukraine didn’t have an army or a state for most of its history,” said Rabkin, who keeps in regular touch with friends in both Ukraine and Russia.

“The conflict is not between peoples. It’s a conflict between two governments,” he said.

“Russia committed something which is not only tragic but it’s also, I think, stupid, even in the short term,” Rabkin added.

The main victims are the citizens of both countries, he said, noting that those hit hardest by sanctions are ordinary people in Russia, many of whom are opposed to the war.

The military occupation has united Ukrainians and allowed their president, Volodymyr Zelenskyy, to prove his mettle, Rabkin said.

While the invasion came as a shock to most people in the Western world, it has been building for years, said Magdalena Dembinska, a professor of political science at the Université de Montréal specializing in Russia and Eastern Europe.

“Putin did not start out wanting a war,” she said.

Ukraine, considered a buffer zone between European countries in the North Atlantic Treaty Organization (NATO), has become increasingly aligned with the West, she said.

“Ukraine is less and less under Moscow’s influence,” she said.

The two countries’ diametrically opposed goals do not bode well for a negotiated settlement, she said. “I don’t see an easy way out.”

As shelling killed dozens of civilians Monday in Ukraine’s second-largest city, Kharkiv, Fortmann said the most likely scenario is for a protracted conflict.

“This will lead the West to get more and more directly involved in helping the Ukrainians,” he said.

However, that help will stop short of direct military involvement, the experts agreed.

“They won’t want to intervene directly in the conflict because that’s a red line that I don’t think anyone is willing to cross,” Fortmann said.

Even if Russia succeeds in toppling the Ukrainian government, crushing the staunch opposition of much of the population is another matter, he said.

“Can you imagine imposing a military occupation in this environment?” he said.

“I think it’s extremely risky. The risk is of having a situation of civil war that would drag on in the long term,” he said.

The humanitarian crisis in Ukraine, from which some 500,000 refugees have fled, will further mobilize public opinion in Europe, he predicted.

“I think the tensions between Russia and the rest of the world will remain very high for the coming months,” he added.

Fortmann said the crisis bears striking similarities to the 1962 Cuban Missile Crisis, which brought the world to the brink of nuclear war.

“The higher these tensions, the greater the risk of something going wrong,” he said.