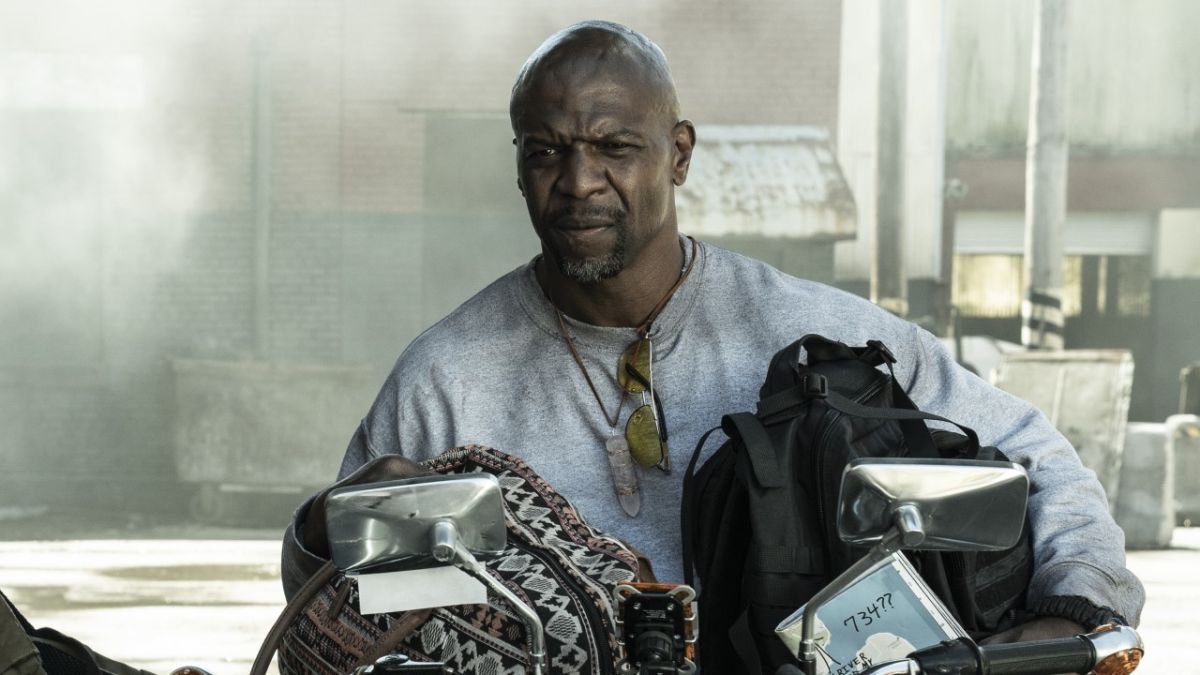 Spoilers below for the Season 1 premiere of AMC’s Tales of the Walking Dead, so be warned if you haven’t yet watched!

With its opening hour, the anthology spinoff Tales of the Walking Dead delivered a reunion for Terry Crews and Olivia Munn years after their time in HBO’s gone-too-soon drama The Newsroom. Their titular characters Joe and Evie met and experienced quite a wild and singular ride within this expanding franchise, as their attempts to reconnect with familiars from their pasts didn’t go the way that either of them expected. Viewers almost watched Crews’ doomsday prepper being killed off by a potential love interest who’d been traumatized and turned murderous, but he thankfully escaped that particular dark fate. Ultimately, Joe walked into the metaphorical sunset with Evie and their pet goat, allowing for him (and/or Evie) to return in one of the many upcoming Walking Dead spinoffs.

The obvious question now is whether or not that will ever happen. When Terry Crews spoke with CinemaBlend and other press ahead of Tales of the Walking Dead’s debut on AMC and AMC+, I asked about his character getting a rather insane and epic love story ahead of Rick and Michonne’s limited series, as well as the pair getting romantic in the first place. And Crews spoke excitedly about how the episode’s timeline placement allows for Joe to theoretically have connections with past present and future Walking Dead characters. Here’s how he started:

The America’s Got Talent host is a huge Walking Dead fanatic, and thus could not have been more pleased about factoring into a story that capped off with a world of possibilities, as opposed to Joe meeting his maker in a horrifyingly conclusive manner. Given the episode takes place 400+ days after the still-unexplained apocalypse, that means Terry Crews’ Joe and Olivia Munn’s Evie would have met at a point in the timeline that would likely match up with the end of Season 4, somewhere around the point when David Morissey’s Governor would have met Alanna Masterson’s Tara and her family.

Terry Crews then brought things back to Rick and Michonne, sharing how he was just as shocked as anyone at San Diego Comic-Con regarding the news about their return for the new series. But while many actors would be more reserved about what the future could hold, Crews very openly voiced his desire to return in the future, since the episode’s conclusion made it possible. In his words:

While there’s obviously always the chance that Joe didn’t actually survive long enough to reach the point when Rick and Michonne finally reunite, it’s more uplifting to be optimistic about such things, considering we won’t know either way until some writer within the Walking Dead universe lays it out there.

When I commented that Joe, who delivered some of The Walking Dead franchise’s best swear word deliveries to date, could have feasibly taught Jeffrey Dean Morgan’s Negan how to drop a convincing F-bomb, Terry Crews was even open to the idea of Joe and Negan knowing each other before his reign of terror. But then he also shared some ominous words for anyone truly hoping to see Joe again in this world. He continued:

As fans are well aware at this point, twelve years after The Walking Dead debuted, that for every positive moment a character experiences, it ends up equaling out to roughly a dozen or so truly awful and harrowing situations. And getting tied up and drugged only counts as ONE of those. So even if he does show up in Rick and Michonne’s spinoff, he might be a cold and calculating villain by that point, having experienced all kinds of tragedy-stricken mess. But how badass would a fight scene be between Terry Crews and Andrew Lincoln, or between Crews and Jeffrey Dean Morgan? I’ll be keeping my fingers crossed.

Tales of the Walking Dead airs Sunday nights on AMC at 9:00 p.m. ET, with new episodes streaming one week early on AMC+. Head to our 2022 TV premiere schedule to see what other new and returning shows are popping up soon!