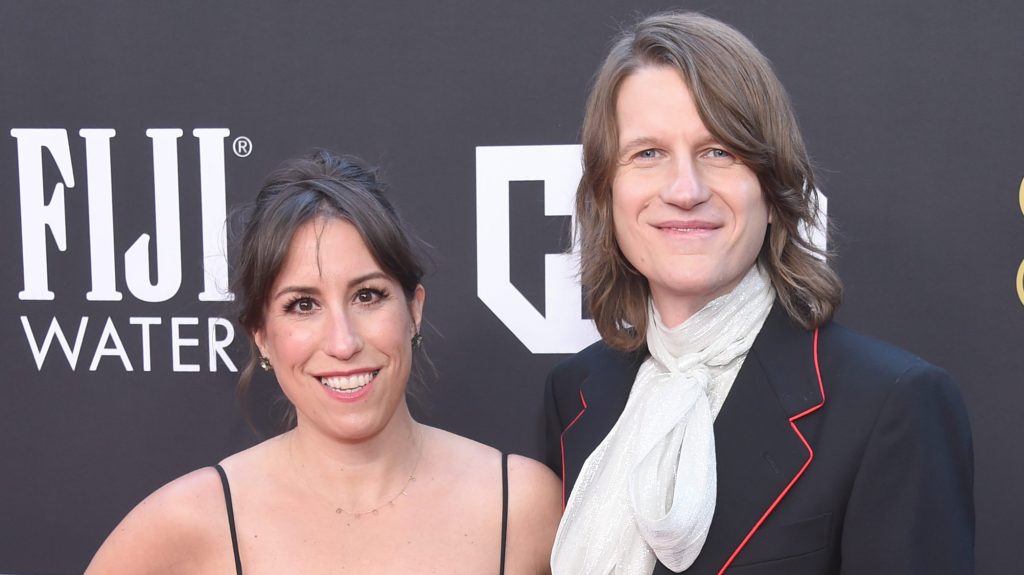 For a pair who makes what they do look so easy, Ashley Lyle and Bart Nickerson can’t help but lament about having to write season 2 of Yellowjackets, Showtime’s pulpy drama that’s on the Emmy short list for a Best Drama nomination.

“I think the hardest part of being a writer is the writing,” quips Nickerson. “I hate the scene in movies where the writer is just typing away like they are in this tremendous state of outpouring. My experience of writing, and everyone I’ve ever talked to about their process, is that you sit and worry and Google stuff. Then you get an idea for two sentences. And then it’s, like, back to the anxiety.”

“I think it was Hemingway who said writing is easy,” adds Lyle. “All you have to do is sit down at a typewriter and bleed.”

If that’s what it takes to get more juicy stories about a group of female soccer players and how they survived a plane crash, then so be it. Here, Lyle and Nickerson — who just this week received the Showrunner of the Year Award (with Jonathan Lisco) at the Banff World Media Festival — discuss their writing process and what inspired them to name their show after a predatory wasp.

DEADLINE Before we discuss Yellowjackets, I really want to get your origin story. What was your first project together?

ASHLEY LYLE We came out to L.A. very much with the intention of becoming TV writers. That’s where our heart has always been. But we managed to land in Los Angeles right as the Writers Strike was taking shape, so it felt really tricky at that time to get a staff job. We had written a pilot script and got us a manager and had started getting a little bit of attention. Then we got a job to adapt a book series into a feature. It 100 percent never went anywhere, but that was actually our first job. Then our first TV job was on The Originals on CW.

BART NICKERSON We were not married yet, but we were together and working together. We met on the east coast.

DEADLINE So when you are in the writers room, what roles do you fall into? What do you bring together to create this perfect unit?

BART NICKERSON it’s hard to answer. In the writer’s room, we just bring things that are steeped in our own unique points of view. There’s a Venn diagram of our taste, where there are certainly things that are different. But the places we overlap …  it’s just really good to have that kind of redundancy. I know if I really like it and Ashley really likes it, there’s a really good chance we’re gonna really like it after a 15 drafts and after six or seven cuts of something.

ASHLEY LYLE We are not a divide-and-conquer partnership. We tend to be in it together on most aspects of the process. But our brains tend to work very, very differently. Bart is a very visual person. He has a great visual aesthetic. He does a lot of painting and drawing. When we get into color correction, for example, that’s something where Bart will take point because he has such a good eye.

DEADLINE Is one better with comedy than the other?

BART NICKERSON You should probably do this interview separately.

ASHLEY LYLE We actually started out our careers wanting to be comedy writers. It works really well to have a partnership when you’re writing comedy, because if either one of us comes up with two good jokes in a scene, then all of a sudden you have four good jokes. That’s always fun. We decided pretty early on that, because we love character and genre work, we would rather be the funny people in a drama room than the dramatic people in a comedy room.

DEADLINE How did the idea of Yellowjackets come about?

ASHLEY LYLE I remember we got into our car, which was parked out front of our house for some reason and not in our garage. That sticks out to me. And even though I think I’m the one who has more of a longstanding affection for the movie Alive, I believe it was Bart who first kind of turned to me and said, ‘You know, what if’ and shared the very basic premise of the show. I went, ‘oh, that’s, that’s interesting.’ It sort of took on a critical mass at a certain point. We would take these long walks together and just talk about different characters and different ideas. It grew from there.

DEADLINE Did you pitch it to multiple outlets?

BART NICKERSON Yes. We pitched it to everybody. We did this pitch, like, 500 times.

ASHLEY LYLE I think at one point we were joking with our studio and our producers and were like, ‘so who are we pitching tomorrow, Starbucks?’

DEADLINE How did you remain optimistic that it would sell?

ASHLEY LYLE I think we pitched to had 16 or 17 different networks. We ended up getting offers from five of them. HBO, as an example, was very honest after the pitch. they said they really liked it, but they already had Euphoria in development. And they were like, we’re probably not gonna develop two projects with teenage protagonists. So even though that wasn’t a place where we sold it, we were getting positive feedback and that’s always helpful as you’re going through the absolute grind.

DEADLINE Isn’t that funny? So many viewers didn’t really focus on those teenage protagonists. They were invested in the older women.

ASHLEY LYLE We saw it as a very even-handed show. There’s a difference between shows that feature teenagers that are aimed at teenage viewers and shows that feature teenagers that are aimed at a more adult audience. We always point to The Virgin Suicides, which is very much about teenage girls, but does not feel like YA. That being said, I think the networks are very aware of their brands and don’t tend to look at things that way. Shows about teenagers or that feature teenagers with ambitions to be something other than a classic YA show tend to frighten people a little bit. They aren’t something with a long track record. That is something we came up against when we were pitching it. The flip side of that was how there were a couple places that very much saw it as a YA show and that wasn’t our intention. So we ultimately felt like those networks were not the best fit.

DEADLINE How did you come up with Yellowjackets as a name?

ASHLEY LYLE We are notoriously bad at titling things, generally speaking, or at least we feel like that is not necessarily our strongest suit. So many of our projects have remained untitled Lyle-Nickerson project for way too long. In this case, and this isn’t the best story, we just started Googling sports team names. We had the idea early on that we wanted the title of the show to be the name of the team. When we came across yellowjackets, it felt like a perfect fit thematically. The yellowjackets as a species are very dependent on a queen and the dynamics of the hive are very specific. It sounds so corny, but it’s a small creature with a large sting. We felt that was just right.

DEADLINE Did you see Melanie Lynskey’s popularity coming early on? There’s such overwhelming love for her and her character.

BART NICKERSON We just loved her so much and were so excited to get her. I guess I was surprised that she wasn’t already so beloved because we thought that already existed. She just said the other day how she just did her first talk show. I was like, that’s insane.

ASHLEY LYLE I was absolutely floored by that. I just assumed everyone already knew she was one of the best actresses on the planet.

DEADLINE I’m fascinated by married couples who write together. My other favorite team in town is Robert and Michelle King who happen to be responsible for some of the most terrific shows on TV. How do you do it and still love each other?

ASHLEY LYLE It’s funny people ask that a lot and our response is genuinely, how do people not do it with their married partner? I feel like if we weren’t in this together, we would never see each other. It’s such an all consuming job. It’s a real benefit to our relationship that we are just spending so much time together every day. There’s a learning curve, absolutely, to be able to disagree creatively but not let it affect the relationship.  I think it’s just that we truly respect each other as writers. Incidentally, we’ve been such huge fans of the Kings for so long. They’ve really been our bright shining star, an example of a married couple that does it well and creates incredible shows and has a long and lasting marriage. I actually got to meet Michelle at an FYC event recently and I totally fan-girled out a little bit because I love Evil. It’s one of my favorite shows.