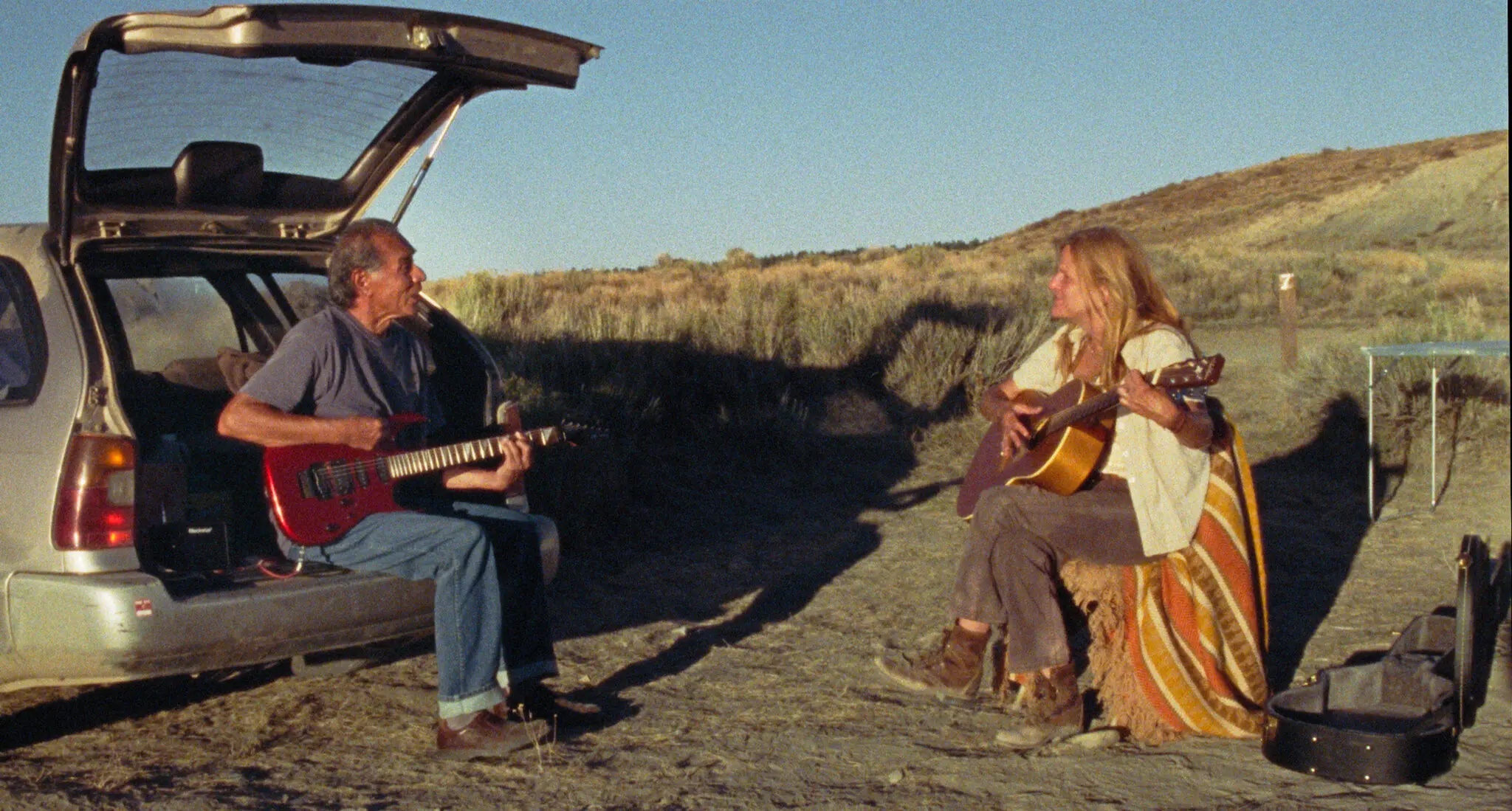 “Shake Sugaree,” a song written and recorded by Elizabeth Cotten in the 1960s, plays over the opening scenes of A Love Song. Cotten was a guitar prodigy who quit playing when she got married and was rediscovered in her 60s. Now her song is the soundtrack of the daily rituals of Faye (Dale Dickey), who lives alone in a semi-trailer set down in a campsite next to a lake out west. The details of Faye’s life, her past and present, are doled out carefully over the next 80 minutes, but the song tells us most of what we need to know: “Have a little song/ Won’t take long/ Sing it right/ Once or twice/ Oh lordy me/ Didn’t I shake sugaree.” A Love Song is not a story, but a song. A simple tune about a woman who had a life, lost it, and is now gingerly stepping back out into the world. Like Elizabeth Cotten, she deserves to be rediscovered.

At the campsite, Faye waits for Lito (Wes Studi), her friend from grade school. She hasn’t seen him in roughly half a century, but she wrote to him and told him where she’d be. Why now? We don’t quite know. In the meantime, she lives a solitary, idyllic existence. She catches her dinner in the lake, listens to the bird songs, and occasionally chats with the other campers, including Jan (Michelle Wilson) and Marie (Benja K. Thomas), longtime partners who are struggling with the stuff people in relationships struggle with. They and Faye hit it off, but she’s just a tourist in their world. Commitment is a foreign territory. She’s just looking to reconnect.

A Love Song is the first film by writer-director Max Walker-Silverman, but you’d never know it. His confidence is preternatural. He lets the film breathe and resists the temptation to overexplain or fill the spaces with meaningless chatter. The most profound emotional moments occur silently, wordlessly, with the director accepting what the actor is willing to give him. When Lito arrives at the campsite, you might expect a bevy of nervous banter as these two 50-somethings grapple with intimacy. But instead they fall into a comfortable silence. Dickey, a veteran character actor with a face full of expressive lines, is remarkable in a long-overdue starring role—like Cotten, like Faye—expressing her nervousness in the uncrossing of her legs as they dangle off an embankment, or just in the simple stillness of her vulnerability. Once or twice, she sings it right.

Inevitably, there will be those who find A Love Song too precious. They’ll say its mood is too contrived. The characters don’t have cell phones or laptops. They communicate in letters. We never learn what Faye does for work, or how she is able to pack up and live next to a lake for as long as she likes. There are other characters who strain credulity, like the little girl with four older brothers—all of them cowboys—who speaks with a preternatural wisdom. When they gift Faye a red toy canoe in exchange for help with their car, the moppet advises her, “It’ll be good for recreation and romantic excursions.” It’s precious, yes. But don’t forget: It’s a song, not a story. It’s supposed to be felt, not interrogated.

Still, it’s a film with more on its mind than a melody. In his tale of lonely souls adrift in rugged terrain, Walker-Silverman is dancing with the conventions of the western, that most American of genres, which must now wrestle with its own sexism and racism. And so there’s something satisfying in Walker-Silverman’s quiet focus on those in whom the genre typically had little curiosity: the Indigenous man and the middle-aged woman; Jan and Marie might mark the first appearance of Black, queer characters in a western. It’s also noteworthy how the young girl speaks for her brothers; the film’s only stereotypical cowboys—White, male, strong, and stoic—don’t get a line of dialogue.

These choices don’t feel political, unless you’re the type of viewer who sees any decentralizing of White men in America’s history as a threat. Instead, they melt into the story like the sun into sand, or like an old, wrinkled hand into another. You don’t need to appreciate its politics to fall in love with A Love Song. You just need to be human.