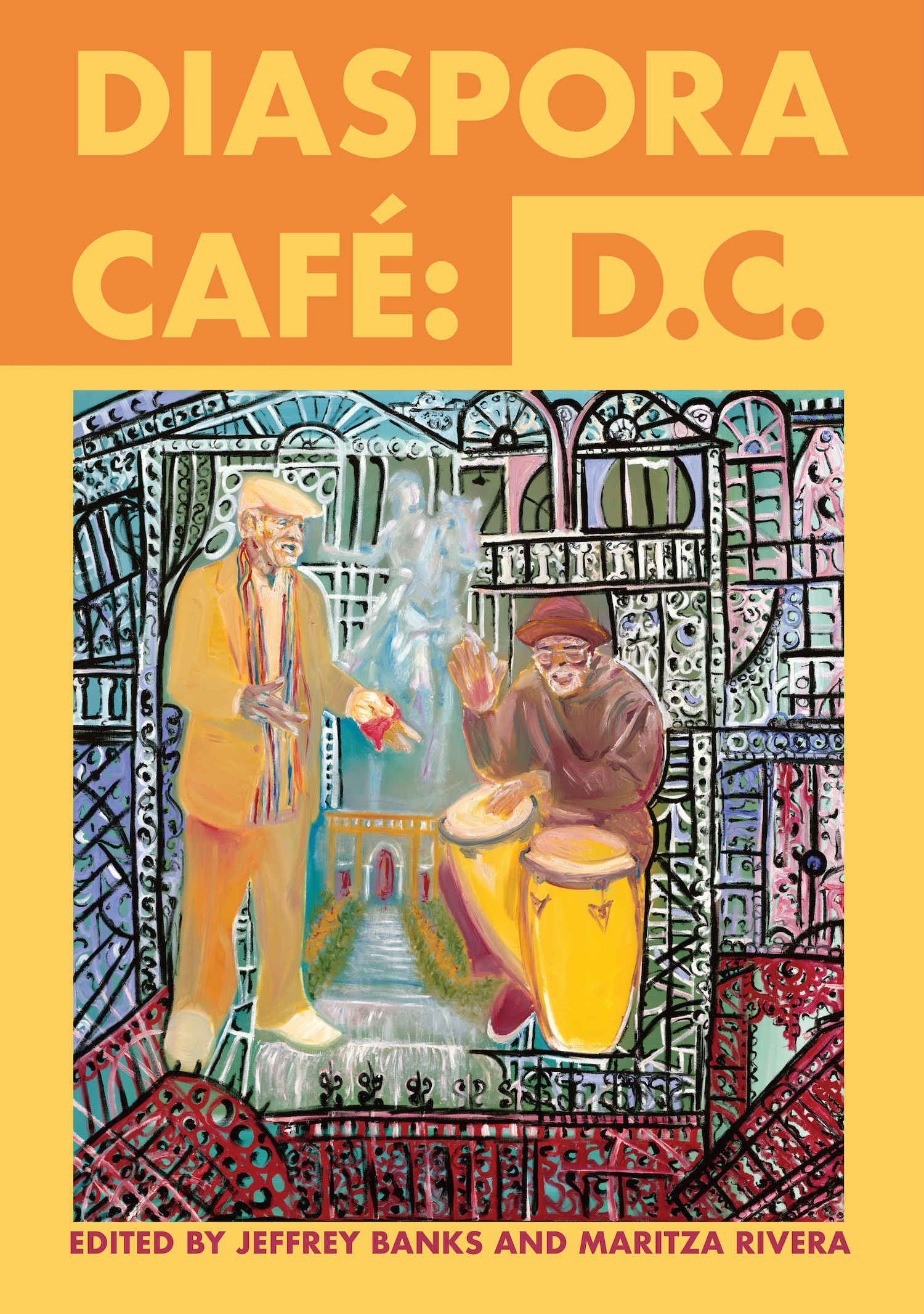 The sun only just rose, but early-morning humidity glazes each animated face with sweat. On a Saturday, the café is crowded and, thus, loud; a woman trumpets her love for Hedy Lamarr, while horns scream Caribbean-style melodies, their shrillness complemented by the rubbery noise of shoes tapping on a clay floor. This is Diaspora Café: D.C., a melodic and lively collection of poetry edited by Jeffrey “Big Homey” Banks and Maritza Rivera and published by Day Eight. The poems conjure a colorful café where all are welcome to live and learn, a communal space established by and through Afro-Latinx creativity, set to the often wistful, rhythmic soundtrack of the Black and Brown experience within the D.C. region.

Diaspora Café: D.C. celebrates and preserves difference, recognizing the breadth of Afro-Latinx people who “embody many shades of a ‘Brown.’” Banks and Rivera assembled 34 poems from 14 writers in this intimate anthology representing the region’s dynamic Afro-Latinx culture. In a note from the editor, Banks states “this collection features ethnic populations often misunderstood.” His goal for the anthology is to uplift Black and Brown voices, dispel offensive stereotypes, and achieve understanding for all readers. The poems are by and about Afro-Latinx creatives, and the collection, so intimate and honest, generously welcomes unfamiliar readers to a fictive café bustling with life.

Joy “Sistah Joy” Alford, the Caribbean girl, dances and hums a melody of her excellence. Her celebration gives way to the mystical musings of Jane Alberdeston Coralin, whose edgy verses and vivid images are rooted in Puerto Rican soil. Stories of loss slam into shouts of joy, and the voices, each one distinct, harmonize in the song of diasporic mixing.

Organized alphabetically by author, the poems are largely free-verse, allowing poets like Saleem Abdal-Khaaliq to abandon flat poetic conceits in favor of bold spacing and staggered verses in his innovative and brilliant “Muse/um.” Though extended exposure to a poet gives one a stronger feel for their voice, which Diaspora Café captures, the editors miss an opportunity to facilitate conversations between poems in this alphabetical arrangement, preventing the very communication the collection purports to uphold. Thankfully, even without conversing with one another, each poem presents a story to readers in a unique and deeply personal, if occasionally clunky, voice.

Readers should fold their own voices into the mix, activating the text with speech and adding to the din of the café. Animating the verses lays bare the influence of oral tradition and community gathering that undergirds the entire collection. Turns of phrase that appear awkward on the page sound natural to the ear. Christine Williams’ love poem “A” demands to be read; to join Williams in exclaiming “I love when you do that shit!” is pure happiness. Spanish words and AfroLatinidad references may not be familiar to all readers, but all who encounter Diaspora Café will learn about a thriving culture and the challenges facing Afro-Latinx communities from its members.

Themes of discovery, youth, loss, and anger tinge the earnest narratives woven by local poets who recount the joys and tribulations of life in and around the nation’s capital. Refusing to be forgotten, the poets whose voices color Diaspora Café: DC confront systemic erasure of Afro-Latinx populations with powerful stories—some experienced, some inherited—that testify to the richness and fullness of community. An antidote to the hollow promises commonplace in the overly mediated American political arena, the verses in this anthology are generous, honest, and welcoming.