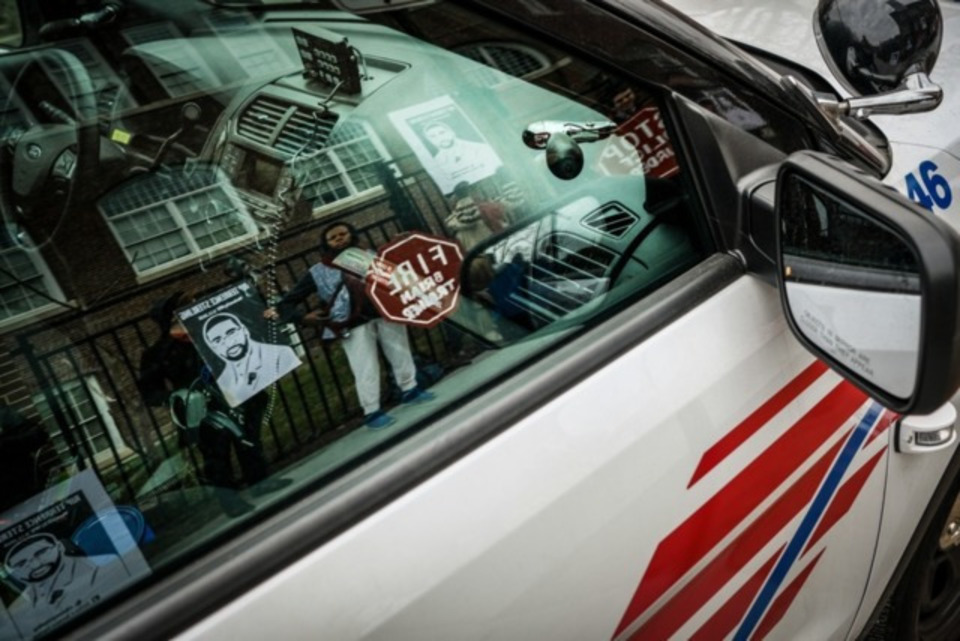 Last July, the union lost its attempt in D.C. Superior Court to prevent the release of body camera footage of serious and fatal uses of force. And in February, a federal judge rejected the union’s arguments that a bill that prohibits it from negotiating over disciplinary process is unconstitutional. The union appealed both cases and is awaiting decisions.

“Their laws let criminals run free and prevent police from keeping us safe,” a narrator says over a horror-movie soundtrack, while claiming homicide, carjacking, and violent crime rates are the highest they’ve been in 20 years.

While it’s true that homicides started trending upward in D.C. in 2015, they also increased across the country. And in 2020, the homicide rate in the U.S. jumped nearly 30 percent, the largest one-year increase in modern history. Total homicides increased in D.C., too, from 166 in 2019 to 198 in 2020. Overall property crime and violent crime in D.C. increased slightly, by 3 percent each, from 2020 to 2021. But the homicide rate and overall violent crime rate in D.C. is lower than it was in 2000, according to FBI data.

Pinpointing why exactly crime rates increase or decrease is tricky. Several factors, including the number of police officers, could play a role, as could social and economic upheaval from the pandemic, an increase in gun purchases, the fallout from racial justice protests and police brutality in 2020, and an increased mistrust of the police. It’s disingenuous to suggest that any one factor is to blame, much less individual councilmembers.

The union’s ad also blames Mendelson and Allen for cutting the police budget, which is partially true. Allen chairs the Committee on the Judiciary and Public Safety, and therefore has the most significant input on MPD’s budget. But the entire Council voted on the department’s $545 million budget for fiscal year 2021. And as WUSA9 reported, legislators moved $23 million for school security out of MPD’s budget and into the DC Public Schools budget. Most of those funds go to third-party security providers and have little impact on MPD’s operations, according to WUSA9’s report. Without the $23 million reduction, MPD’s budget would have risen above their $559 million budget for 2019.

The Council approved a $516 million budget for MPD for fiscal year 2022, but that figure is $2.6 million above what Mayor Muriel Bowser proposed. The overall decrease is generally due to the fact that officers are leaving the force faster than MPD can replace them, according to the D.C. Fiscal Policy Institute’s analysis.

Pemberton argues that the attrition is directly related to legislation the Council passed on an emergency basis in the summer of 2020 after George Floyd was murdered in Minneapolis. In addition to the provisions the FOP challenged in court, the bill prohibits the use of neck restraints, adds civilians to the Police Complaints Board, restricts the use of chemical irritants and “less-lethal projectiles,” and requires officers to explain that people have a right to refuse a consent search, among other things

“There are quite a number of things that would make even a seasoned officer say ‘I don’t want to work here anymore,’” he says, adding that applicants and recruiting classes have shrunk in recent years.

Some research suggests more officers, if used correctly, can reduce homicides and other serious crimes. But at the same time, “larger police forces make more arrests for low-level ‘quality-of-life’ offenses, with effects that imply a disproportionate burden for Black Americans,” according to a National Bureau of Economic Research working paper that examined the effects of larger police forces across race. Data compiled by crime analyst Jeff Asher shows large cities that reduced police budgets were nearly as likely to see a rise in homicides as cities that increased them.

Mendelson, for his part, calls the FOP ad “kind of silly” and questions the union’s end game.

Both he and Allen are up for re-election this year, but the ads don’t encourage viewers to vote for any particular candidate. Mendelson’s primary opponent, Erin Palmer, likely would not oppose the accountability reforms. Allen, who did not return City Paper’s phone call, is facing zero challengers in the Democratic primary.

Mendelson says he met with Pemberton twice in February but was not convinced to make any changes when the Council considers a permanent version of the police reform bill later this year.

“Even if I were to agree to weaken the accountability provisions, I don’t think the Council would go along,” Mendelson says. “And even if the Council went along, the public will be outraged.”

The chairman won’t name names, but he says a “credible source” informed him that if he didn’t bend to the FOP’s demands, the union was ready to spend up to $500,000 on an ad campaign. Pemberton would not go into detail about the cost, but he confirms the FOP bought a local advertising package that he says will run “indefinitely.” The union posted one video on social media, and Pemberton says more are in the works.

“After two years of polite, diplomatic discussion, they’ve resulted in no changes,” Pemberton says. “Now we’re at a place where we have to be bombastic about it to educate the citizens.”

The package of legislation that started all of this is in effect on a temporary basis, though Allen has indicated he intends to advance a permanent version after the fiscal year 2023 budget is finalized.

Mendelson has since introduced additional accountability reforms that have yet to receive a hearing in Allen’s committee. The new bill would make police disciplinary records public, strengthen the Office of Police Complaints, and add a deputy auditor for public safety in the Office of the D.C. Auditor.

The union has filed a grievance with the Public Employee Relations Board seeking to stop the release of disciplinary records, but the filing isn’t public. Pemberton says it has yet to be resolved.

“I think most people want to see more police, but I hear over and over again that people want accountability,” Mendelson says. “And that’s reasonable. The two go together.”