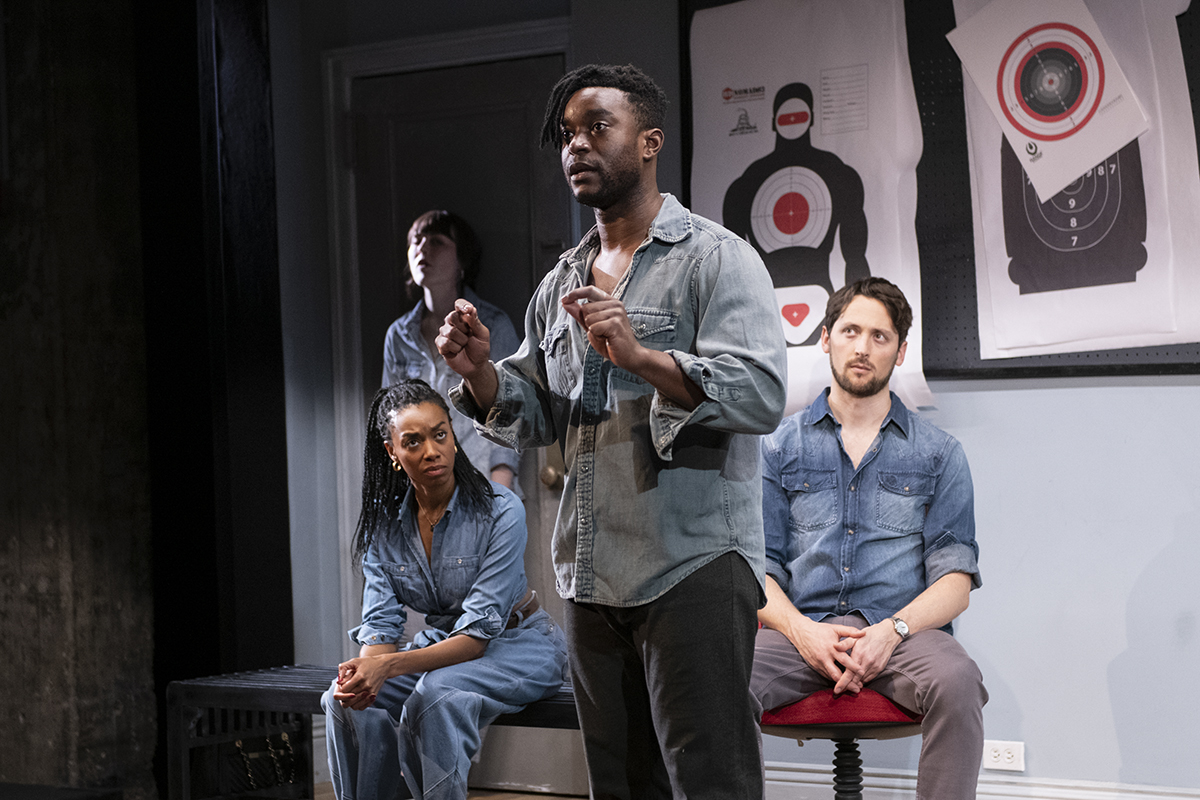 Suzan-Lori Parks’ provocative White Noise (★★★☆☆) leads audiences into high-risk territory where few other plays might dare to tread. Traversing a minefield of hot-button issues and potential missteps, the emotionally raw drama at several junctures stirs a feeling that might best be summed up as, “I’m not sure where they’re headed with this, and I’m not sure that I’ll like it, but I’m definitely intrigued.”

The play’s four close friends are led on a similarly unsettling journey after Leo (RJ Brown), a twentysomething Black hipster, is roughed up by police while out minding his own business on a late-night walk. A stalled artist whose creative block seems to correlate with his chronic insomnia, Leo is left deeply traumatized — not to mention visibly scarred and bruised — by his violent encounter with the cops. But White Noise is not a play about police brutality. It more or less brushes past the incident to launch into Leo’s extreme response to the shame and violation that plague him.

To the dismay of his lawyer girlfriend Dawn (Katie Kleiger), who is white, and their two best friends Misha (Tatiana Williams) and Ralph (Quinn Franzen), also an interracial couple, Leo proposes a bizarre contract to help restore his sense of peace and security. He posits that the only protection a Black man in America ever had from being randomly detained, assaulted, or worse by the police was the ownership and name of his white slave master. And he’s willing to offer his body and freedom to test that theory, so implores to his buddy Ralph, “Buy me. Make me your property.”

Trending
A gay American was killed in Australia in 1988. Someone finally confessed.

Even more to Dawn and Misha’s dismay, Ralph graciously acquiesces, entering into a master-slave compact with Leo that will radically disrupt the lives and relationships of both couples. Within the intimate setting of Studio’s Milton auditorium, director Reginald L. Douglas steers the cast credibly through Parks’ prickly premise — even as Leo and Ralph go to seemingly absurd lengths role-playing the disturbing rules and rituals of plantation-style chattel slavery.

As Leo alternates between aching vulnerability and bubbling with inspiration, Brown does his job making sense of a character whose motives and impulses wouldn’t make much sense in the real world. His layered performance conveys the hare-brained logic behind Leo’s “slave quest,” as well as the character’s existential need to feel less defenseless in the world. On a parallel but opposite course, Franzen’s Ralph makes his own sort of sense, too. Franzen shows Ralph’s dam of restraint breaking as the white liberal bro takes shockingly well — or perhaps none too surprisingly — to play-acting master-slave subjugation.

Still, something isn’t clicking with the production, which rarely transcends its parameters as an intrepid thought experiment. Like the slightly mistimed gunshot sound effects that accompany the foursome’s trips to the shooting range owned by Ralph, the tone and timing are just off enough to be distracting. Leo, Dawn, Ralph, and Misha are meant to be dear friends since college whose many years of camaraderie both enable and complicate Leo’s quest. But the cast’s rapport as a quartet doesn’t evoke such ingrained history, with Dawn and Misha, in particular, seeming like strangers to each other.

That might be due to the fact that the women’s roles are less defined throughout, resulting in Kleiger and Williams bringing vitality to their parts but not much compelling intent. In one scene, Dawn and Misha sprint from pointed discussion to bitter argument with virtually no shape to the journey from point A to point B. In the story’s increasingly dark vision of Leo and Ralph’s slave play, Dawn and Misha remain the odd women out.

All four, however, are party to the play’s fairly pessimistic commentary on the viability of healthy interracial romance in a country so tainted by its racist past. Ultimately, Leo’s project — “an entitled and ridiculous stunt,” in the words of one off-stage character — might work as an exercise in showing the world how far we have not come. Somewhat fanciful where it should be serious, Douglas’ staging of Parks’ brazen drama still cuts deeply enough to prompt real conversations about the complex antebellum racial dynamics that tenaciously persist in modern American life.