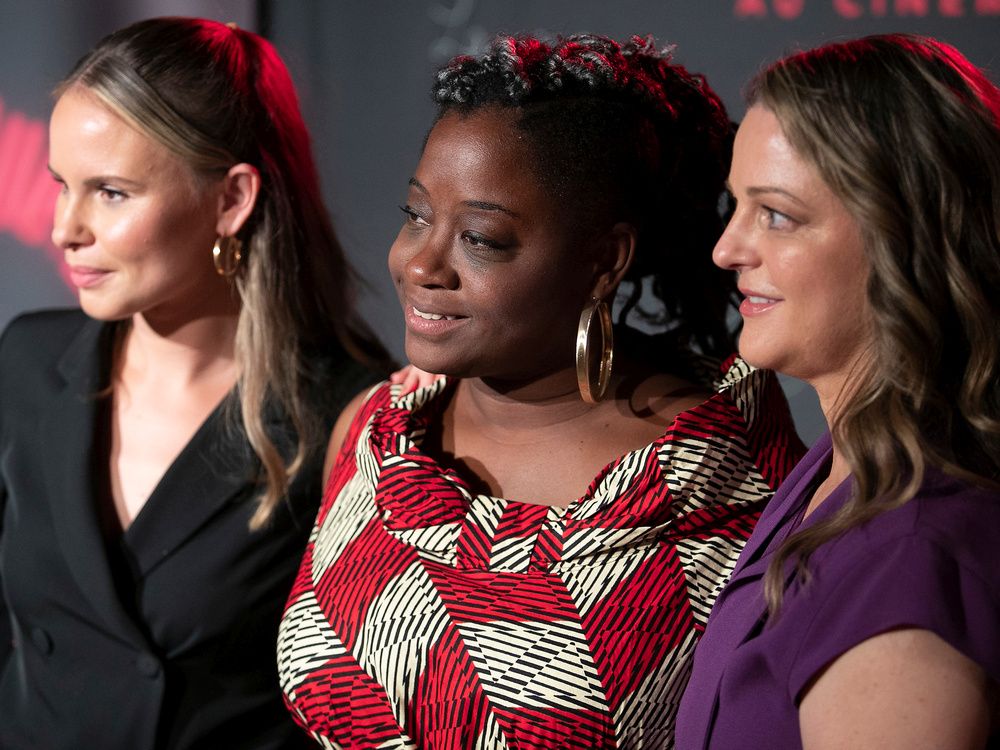 The French title of Guylaine Maroist and Léa Clermont-Dion’s documentary exposing the psychological and physical toll of online misogyny is anything but subtle — Je vous salue salope (direct translation: I salute you, slut) — but it’s highly effective.

The Montrealers wanted to convey the abrasive and shameless nature of the barrage of harassment many women experience on social media on a daily basis.

“We wanted to show the violence, and to be honest with the public,” Clermont-Dion said. “There’s hatred all over the web. We didn’t want to be hypocrites (by shying away from it).”

The bilingual film has a softer title in English — Backlash: Misogyny in the Digital Age. The directors felt a literal translation didn’t quite capture the spirit of the original.

“It wasn’t natural,” said Clermont-Dion, a prominent media personality, as well as an author and academic. “And it’s a nod to (American journalist) Susan Faludi’s 1991 book Backlash: The Undeclared War Against American Women.”

That war has moved online, as the filmmakers show in their documentary, which follows four women from around the globe who are denigrated and attacked for simply speaking their mind.

One of them is Kiah Morris, former Vermont state representative for the Democratic party, who suffered a torrent of co-ordinated online vitriol that spilled over into the real world, pushing the politician to not seek re-election in 2016.

The situation — along with the lack of protection from local authorities — demonstrates “the ways strategic and systemic racism works to not protect women globally,” said Morris, who was in Montreal on Wednesday for the film’s première.

“What I experienced was terrifying; but as we know, it’s not terribly unique. Looking back, I recognize it as part of the rise of fascism, overt racism, misogyny, and violence in the U.S., especially with Trump coming on as president. It made it open season on women in positions of prominence and power to become targets of a new form of very well-organized, calculated, mobilized terrorism.”

Backlash also follows Quebec elementary school teacher Laurence Gratton, who along with other women was trolled and threatened on social media by a male classmate (who was never reprimanded) while in university; Italian politician Laura Boldrini, who was subjected to rape threats (including from an Italian mayor, whom she took to court and won) and who has pushed for more legislative protections for women against such abuse; and French actress and YouTube star Marion Séclin.

One high-profile interviewee is Donna Zuckerberg, sister of Facebook founder Mark Zuckerberg, who states that social media have amplified misogyny and other forms of intolerance, and argues companies have a responsibility to monitor and moderate problematic views expressed on their platforms.

For Clermont-Dion, the fight is personal. A sexual assault survivor, she was harassed by a man on Twitter in 2016 to the point where she finally left the platform. She also received online hatred in 2012 during Quebec’s student protests, in which she was very involved.

She has since earned a PhD in political science from Université Laval, where her research focused on cyber-violence against women. She is currently a post-doctoral research associate at Concordia University, looking at how social media can be used to empower women.

“We’re trying to deconstruct cyber-violence and help young people prevent it, instead of leaving them alone with that kind of hatred,” she said. “We try to give them critical perspective. One of the best ways to prevent (cyber-violence) is through education.”

The filmmakers have launched a website, stoplescyberviolences.ca, and worked with psychologists to create a French-language learning guide (available on the site) which is being distributed in Quebec high schools.

“We hope to raise awareness,” said Maroist. “We want people to come see the movie in theatres, and to talk with friends and those around them about their responsibility. We need to take action.

“People see this as a fait-accompli — ‘Oh, more misogyny online, that’s terrible.’ But we created laws in society so we could live in a more civilized manner. It took centuries, but we did it. I think we can do it with these platforms.”

AT A GLANCE: Backlash: Misogyny In the Digital Age opens Friday with English subtitles at Cinéma du Parc.