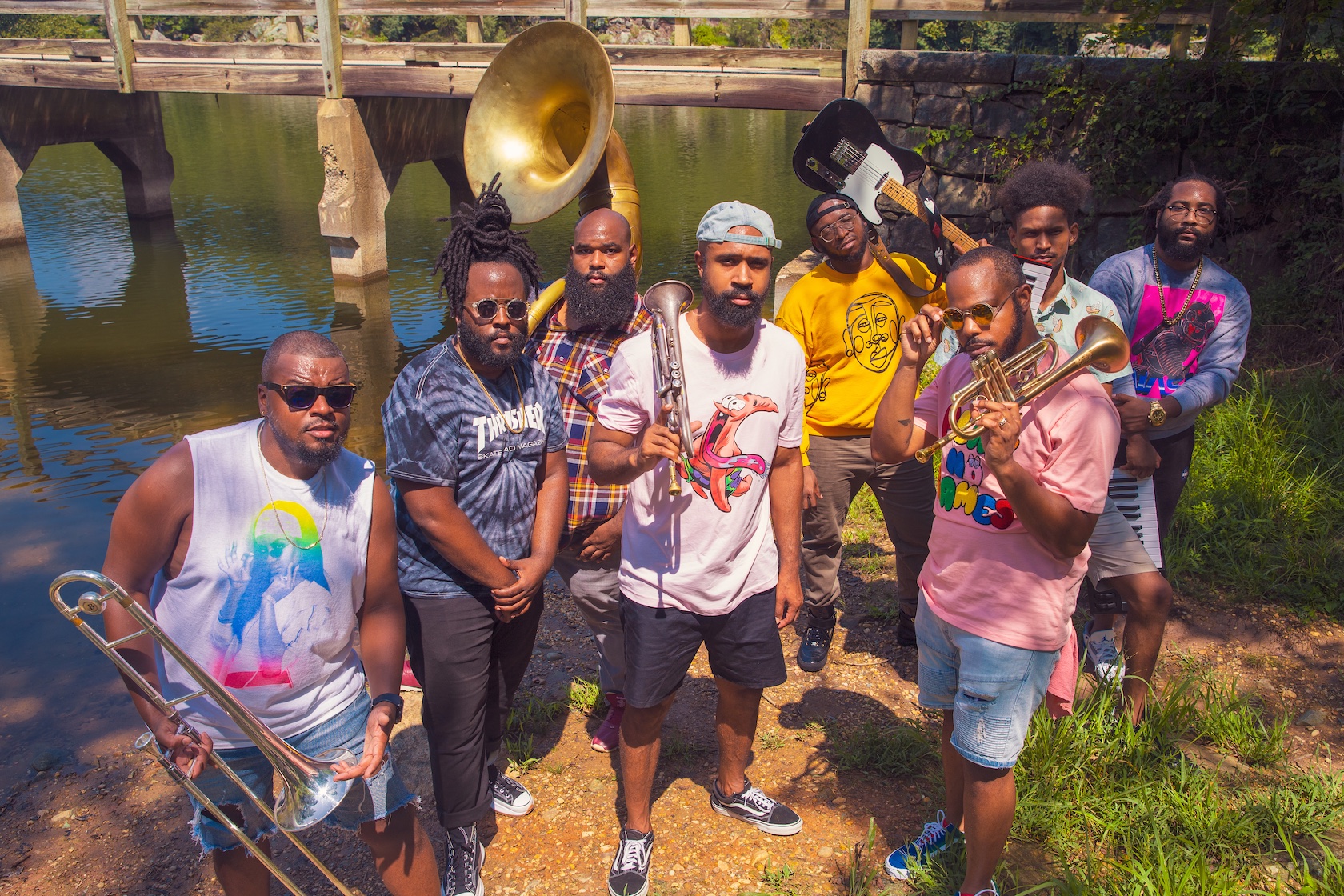 If you haven’t ridden the Dupont Brass train, you may want to hop on. Once a mainstay at D.C. Metro stations (including Dupont Circle, from which the group’s name derives), the evolving brass band is on the come up. Recently, they’ve played amphitheaters, concert halls, and festivals across the East Coast, and they’re hungry for more. In April, the nine-piece band wrapped their first tour, which they booked themselves, and this summer they can be seen at several concert series happening throughout the region.

The band’s earliest gigs were busking and playing Christmas carols in Georgetown, an HU brass band tradition of sorts. It was the right vibe, wrong place, says MK Zulu, explaining that people in the neighborhood weren’t feeling their sound. At a friend’s suggestion, they headed east to Dupont Circle, where they found their audience.

“We ended up at Dupont Circle, in between the Krispy Kreme and the Panera. People would come out and dance in the snow,” Bass Heavy Slim tells City Paper. “There are a couple monumental and memorable moments that happened out there.”

In Dupont, the band arranged their own Christmas carols. “[On horns], we played everything—we played harmonic support, background parts, the melodies. We played solos,” says Slim. “We were literally brass marathon players. We’d have days where there was a horn on our face for maybe seven hours.”

Those hours in the neighborhood paid off. Eventually they started booking actual venues. And over the years, they’ve added talent and switched up roles. The current lineup boasts several newer members: trumpeter “Cousin” Chris Allison and trombonist Matt “Fuzzy Da Plug” Thompson, as well as DeAnte “Turn Up DeAnte” Haggerty-Willis on guitar, and Stan “Da Man” Banks on drums. Today, Deacon Izzy is the frontman and MC, along with MK Zulu, who MCs in addition to playing trumpet. With this lineup, they performed on WHUT-TV’s DMV the Beat, courtesy of PBS, on June 9, played the Kennedy Center’s Millennium Stage on June 22, and opened Strathmore Music Center’s Live from the Lawn series in early July.

Since its formation, Dupont Brass has morphed from a traditional brass band playing Christmas carols to a “supergroup” that demands attention with their irresistible positivity, immaculate vibes, and unstoppable energy. Their music deconstructs and explodes every genre imaginable, from hip-hop and jazz to funk, R&B, and soul, to rock, metal, and go-go.

“Our [individual] interests have always been a part of us,” says MK Zulu. “It’s a combination of our different loves for music. Izzy and I have always rapped. Anthony and Brent have always been into arranging music. So we slowly started to put our own little spin on it. It started to grow naturally—it wasn’t necessarily intentional.”

Although the band is constantly looking forward, their past is crucial to their musical influences. Every member previously played in a marching band or concert band, and a few participated in jazz band. They’re also influenced by the founding members’ alma mater. “The legacy at Howard is very multi-faceted,” says Bass Heavy Slim. He mentions other HU graduates such as award-winning saxophonist Brent Birckhead and nationally renowned a cappella group Afro Blue, who are rising in their genres and inspire the group. “As for the brass instrumentalists, I think we’re taking that into a new direction. We really took it and made an outlet for ourselves,” says Bass Heavy Slim.

“I feel like we’re the second coming of the Blackbyrds,” another legendary HU alum from the ‘70s, says MK Zulu. “We just have that spirit.” Zulu also describes the group’s current iteration as The Roots meets Earth, Wind, and Fire. The band’s 2020 album Music Education (which they consider their true debut) integrated hip-hop, slow jams, and complex jazz chords in a deeply eclectic track list that flows smooth as butter. Most strikingly, the group is tighter than ever, even with their growing lineup.

Dupont Brass’ rise shows no sign of slowing. On June 21, they released a new track, “Summer Vibes,” which features heavenly vocals from D.C. artist La’Vonne. And they’re teasing more singles. Aside from working on a new album, the band hopes to progress into the final rounds of the Opening Act contest (you can vote for them here through Aug. 4) put on by Audacy. The contest invites bands to try out for a chance to open for the massive benefit concert, We Can Survive, at the Hollywood Bowl in October in support of the American Foundation for Suicide Prevention. The 2022 lineup has yet to be announced, but last year’s show included the Black Eyed Peas, Coldplay, and Doja Cat.

Dupont Brass is everywhere you look this summer, but they remain grounded and humble. Thanks to their past as students busking for meal money, they are firmly rooted in their conviction as artists. Slim isn’t ruling out a return to a familiar Metro stop sometime in the future. “We could at some point go back to Dupont Circle,” he says. “As a tribute to ourselves.”

Dupont Brass will play Summerbration Fab Friday at 7 p.m. on Aug. 5 at Reston Station and they’ll be back in D.C on Aug. 17 for the Wharf Concert Series. dupontbrass.com.