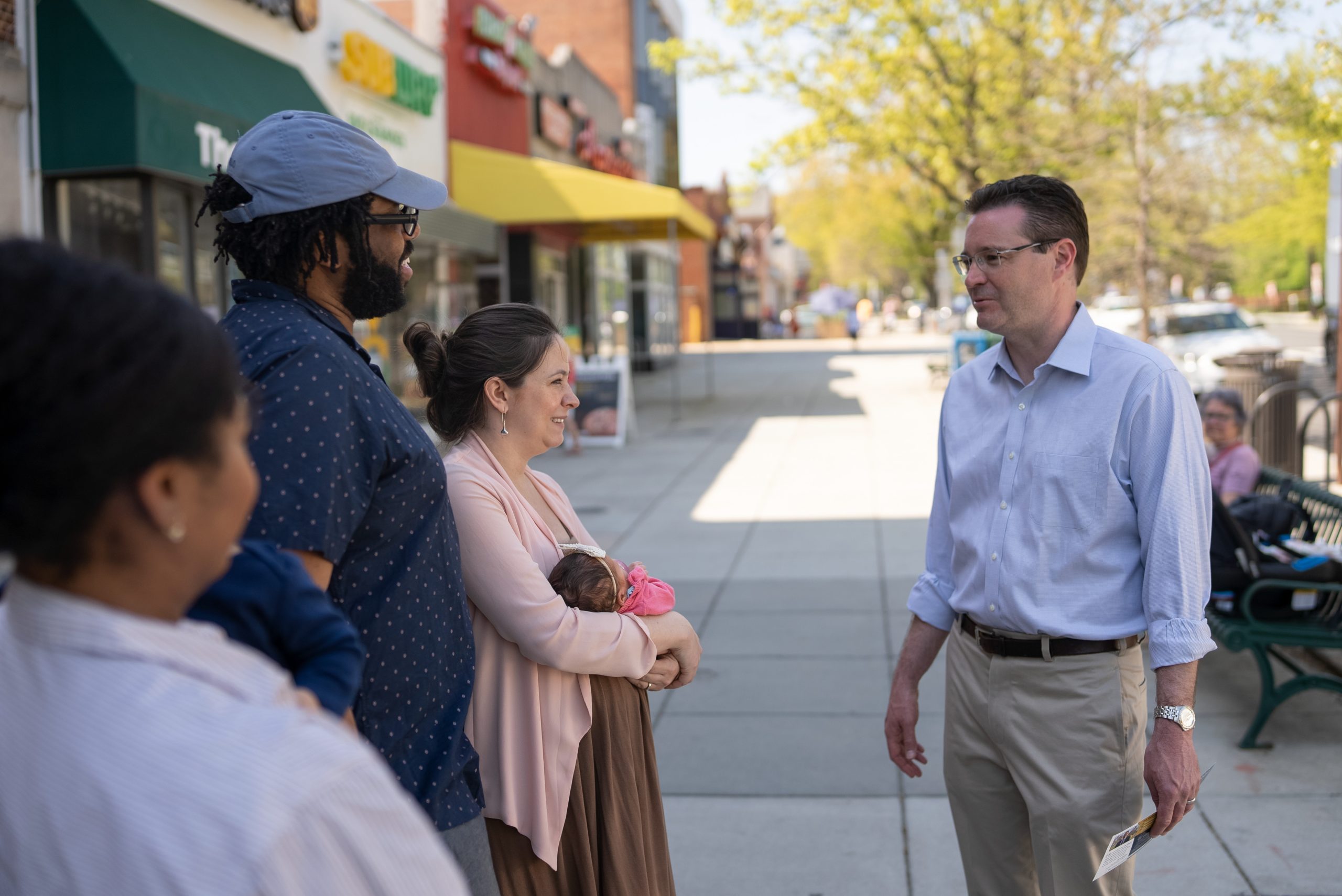 Races for D.C.’s State Board of Education typically don’t get much attention, considering that the board has pretty constrained powers and often acts in an advisory capacity these days. Something tells Loose Lips the contest for the Ward 3 seat may soon be an exception.

That’s because Eric Goulet, longtime D.C. government staffer and erstwhile Council candidate, jumped into the race late on Friday. Several Ward 3 politicos told LL that they had been hearing rumblings for the past week that Goulet was mulling a rapid political comeback, but he didn’t make things official until the weekend, as the Aug. 10 deadline for candidates to gather enough signatures to make the ballot draws near.

This makes Goulet the second candidate this cycle to run for different seats in the primary and the general. The other is Ward 5 Councilmember Kenyan McDuffie, who announced a bid for an at-large Council seat in the wake of his failed attorney general campaign.

Goulet is by far the highest profile politician to enter an SBOE race as of yet, and he comes to the race with some serious strengths, considering he very nearly edged out Matt Frumin in the Council primary. He demonstrated quite a bit of fundraising prowess in that race, scored the Washington Post’s endorsement, and earned a ton of name recognition in the wake of a slew of ads and mailers from outside groups. His only other competition, thus far, is Palisades-area Advisory Neighborhood Commissioner 3D04 Michael Sriqui. Incumbent SBOE Rep. Ruth Wattenberg won’t run again after two terms in office.

The SBOE may lack the power of a traditional school board, but a win here could keep Goulet politically relevant if he wants to attempt another Council bid four years from now. The SBOE has been a training ground for several well-known local pols, including Mayor-for-Life Marion Barry.

Yet he also starts out with a whole lot of bad blood among some local activists. The last race ended with several Council candidates dropping out in the hopes of blocking Goulet and denying his backers in the charter school lobby a crucial win. His frequent Twitter tirades, griping about the race’s conclusion, do not seem to have helped matters in this regard.

Much like McDuffie, Goulet will also be barred from seeking public financing for this race, considering he already accepted Fair Elections funds in his Council bid. He’ll need to raise money the old-fashioned way, meaning he won’t benefit from the matching public funds that powered his Council campaign. And there’s another, perhaps more serious campaign finance matter he’ll be facing down: an investigation into some of his past practices.

LL’s readers may remember a dustup two months ago after Goulet went around claiming to have seen a poll of the Ward 3 race, which some observers speculated could have been a campaign finance violation if he’d gotten an exclusive look at private polling and not reported it appropriately. One of the people Goulet spoke with about the poll, former ANC Troy Kravitz, filed a complaint to that effect with the city’s Office of Campaign Finance on June 9. On Friday, OCF General Counsel William Sanford told Kravitz that the office had accepted that complaint and begun an investigation, according to an email Kravitz forwarded to LL.

That is not some pro forma move—D.C. law gives OCF the discretion to decide whether or not to initiate an investigation based on an outside complaint. Once the agency’s director agrees, they refer the matter to the OCF general counsel, who has 90 days to deliver a recommendation to the director. Any penalties are generally assessed as fines.

Goulet appears to have anticipated an investigation from OCF and sent the office a lengthy rebuttal of Kravitz’s allegations on July 27, which he also shared on Twitter (though he admits in that letter that he did not know whether OCF was investigating the matter or if that investigation had already concluded). He writes that he is “actually in full agreement” with Kravitz that a candidate receiving private poll results would be a campaign finance violation, but asserts he never saw any polling data.

Much as Goulet claimed to LL at the time of the incident, he writes that he heard rumors of a poll at the Palisades Farmers Market, then repeated that gossip to others (including Kravitz). He claims Kravitz called him one night while he was busy tending to his family, and was “rushed, impatient, and distracted” during the duration of their conversation.

“I had answered Troy’s call by mistake, and then after a short while, I became too easily annoyed with his badgering style of speaking, so I responded to a number of his questions in an obviously sarcastic manner,” Goulet writes in his letter to OCF. “I take full responsibility for allowing Troy to cause me to lose my composure like that, and it was an unforced error, particularly since it is never a prudent idea to make gibes about campaign finance law, even if it was done in a dismissive fashion in the context of the complete conversation.” (In an amusing footnote to the letter, Goulet says Kravitz “became only the second person that I had ever added to my cell phone’s contact list, just so I would never inadvertently answer his calls again,” though Goulet later clarified on Twitter that he has “thousands of contacts” but only two he “saved in the contacts list solely for the purpose of allowing me to be able to brace myself and maybe do some meditation before speaking to them.”)

OCF will have to judge those claims against a recording of Goulet’s conversation with Kravitz, which he submitted to the agency as evidence and posted online publicly for the first time. Some of Goulet’s claims fall apart right away upon listening to it—for instance, it’s clear that Goulet was returning Kravitz’s call, not the other way around, and the tone of the conversation is generally pretty friendly. What’s more, Goulet is explicit that this was a “legit poll I saw” and never mentions the farmers market. Instead, he says multiple times that he got the data from “someone calling me up to say, you gotta go get the Post endorsement,” based on his standing in the race.

“It was somebody actually calling me to lecture me that I was only at 1 percent,” Goulet told Kravitz in one exchange. “They were saying that, ‘You gotta go get that Post endorsement.’ And I did.”

Goulet also uses the letter to make it very clear how highly he thinks of LL and City Paper’s reporting on the incident, claiming the initial story on the matter was based on “snippets of the conversation” with Kravitz (it was not). He also assailed LL’s “lack of journalistic integrity” for “baselessly” inferring that the poll was conducted by Democrats for Education Reform, the pro-charter group backing Goulet. He claims he spoke with the group and they assured him they conducted no such poll and were “shocked” by claims to the contrary—LL has since spoken with a source that saw a DFER-backed poll of the Ward 3 race with results that precisely match those that Goulet described. The group also told the Post that it conducted “at least two professional polls for the mayor and Ward 3 races.”

“It might be an interesting and valuable summer research project for an OCF summer college intern to examine whether the member-supported Washington City Paper really functions more like a Political Action Committee (PAC) than an online-only newspaper during D.C. electoral cycles,” Goulet writes to OCF, repeating a claim he has made on Twitter several times. LL hopes that it goes without saying that those few souls kind enough to send City Paper some cash exercise no editorial control over his reporting.

This is all probably a good preview of just how ugly the race could get now that Goulet is involved. Sriqui, for his part, declined to comment on Goulet’s entry into the race. Much like the Ward 3 race, it could draw in DFER money, too, considering the group hasn’t been afraid of spending big even on small potatoes SBOE races in the past.

But there’s no guarantee of that outcome—most Ward 3 observers LL spoke with suggest that Sriqui is at least open to the idea of working with charters and doesn’t share Wattenberg’s skepticism of mayoral control. It may not be as clear-cut an ideological split between the candidates as it was between pro-charter, pro-mayor Goulet and Frumin, a charter foe and a vocal advocate of putting more guardrails on the mayor’s power over schools.

Plus, the group could be hesitant to spend big so soon after Goulet’s opponents united against him with the explicit goal of beating DFER. Perhaps, unlike Goulet himself, the group will decide discretion is the better part of valor in November.