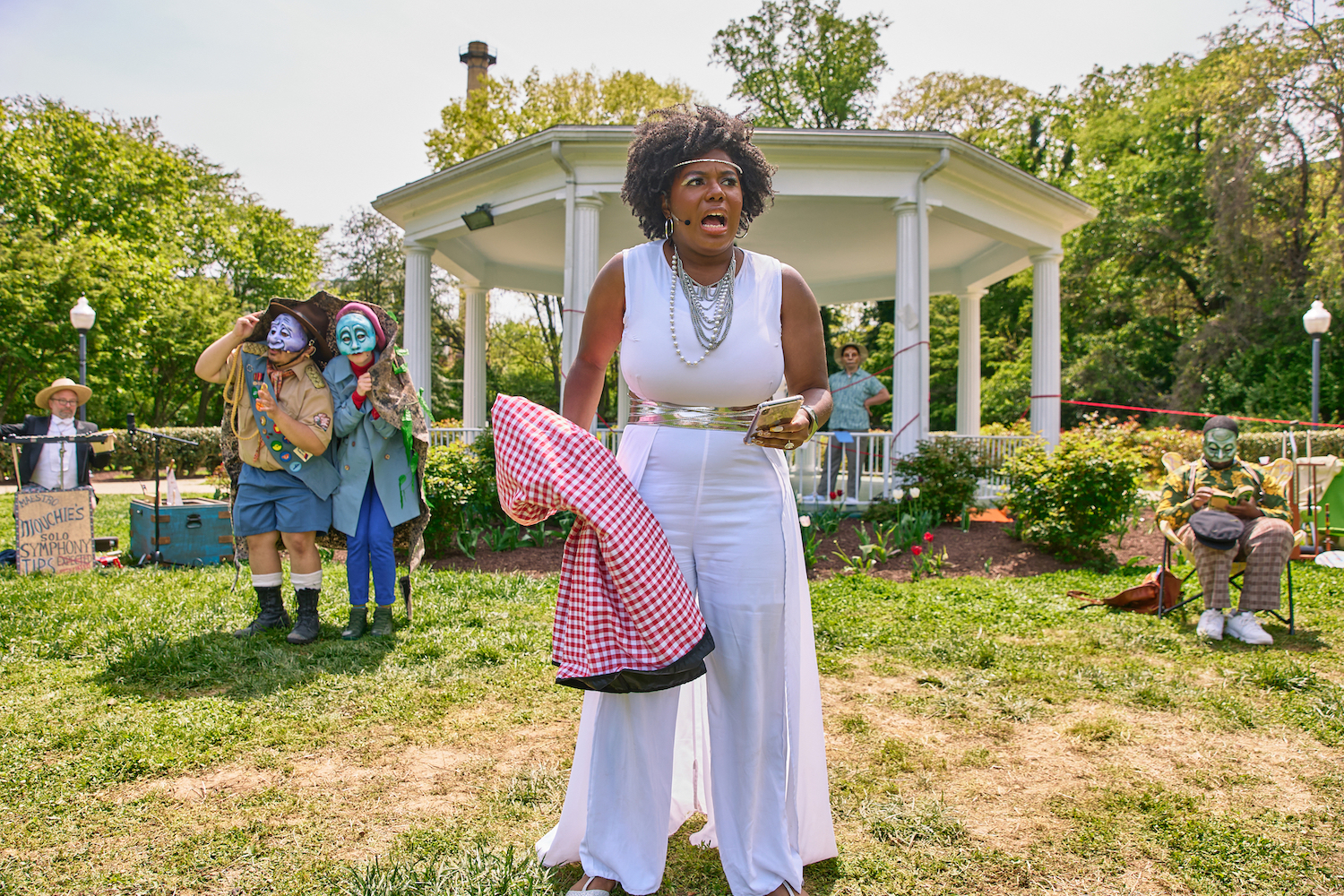 Starting in the early 16th century with touring troupes of masked performers famed for their improvisational abilities, commedia dell’arte laid the foundation for professional theater in the west. While many theater companies pay homage to those roots (see Synetic Theater’s recent adaptation of Carlo Goldani‘s The Servant of Two Masters), Faction of Fools is the only local troupe dedicated to the nearly five hundred-year-old art form. Despite centuries of tradition, the form lends itself to reinvention, which Faction does in its delightful, outdoor production of Missed Connections, the company’s first in-person performance since Francesca Chilcote and Kathryn Zoerb took over as co-artistic directors during the pandemic.

Maestro Mouchie (Jesse Terrill) walks out from behind the bushes by the gazebo on the former Walter Reed campus, violin in hand. Dressed in a tuxedo jacket over a white tie and vest, with garters and floral-patterned boxer shorts, he takes his seat and begins his solo as the mysterious Croquet Man (Ben Lauer) arrives and sets up his wickets. The comic juxtaposition of an outdoor concert and croquet game sets the mood for Missed Connections.

A series of characters arrive and make their introductions. Ranger Captain Emilio Montoya (Andrew Quilpa), dressed in a park ranger uniform festooned with epaulets, tassels, and a Boy Scout sash complete with merit badges—including an incongruous New Jersey Transit patch (a prime example of how costume designer Lynly Saunders updates commedia’s iconography to our era), lists off the park’s rules. A blue-moon-faced secret agent with a ridiculous French accent, raspberry beret, and a phone concealed in a croissant, named Blackbird (Natalie Cutcher) promises intrigue. @1materialgworl (Desire Lovey Mae) is a social media influencer determined to have the perfect background, lighting, and response when it comes time to livestream the moment her lover proposes.

It’s not like the aforementioned Goldoni and the crazy clockwork plots he crafted, but the chaos of many accidental collisions. Each member of this zany cast of characters makes their entrance, lays bare their obsessions, compulsions, appetites, and delusions that send them careening until they meet a force just as foolish. Only then does a plot emerge: Bernard Farfalle V (Colin Connor), a local dandy, is in pursuit of the Aphrodite Fritterelle, a rare, elusive butterfly that has been sighted in the park. As a collector, Bernard wants to catch it and pin it into his collection. Meanwhile, entomologist Isabel (Chilcote) wants to rescue the Fritterelle from the endangered list and tries to lure it with honey and poetry. Can love-at-first-sight reconcile these irreconcilable differences?

Local celebrity chef Robby Slay (Zoerb) is also in pursuit of the butterfly. His restaurant, Arlecchino’s Laundry (named for a character Zoerb often plays), lost its two Michelin Stars when the pandemic forced him to cut corners. Robby hopes to regain past glory by pickling the butterfly’s thorax, encrusting its wings in tamarind and serving it to the Michelin evaluator rumored to have a reservation later that night. And then there is the aptly named and ever-snacking hedonist Dr. Gastro Nome (Deimoni Brewington), unsure if he got the dates of his book club right. Meanwhile Montoya and Blackbird come across Sofia Escalante (Ruth Elizabeth Diaz) a noirish femme fatale clad in bright colors searching for her lost dog, Bosco. Do the clues lead them to uncover a greater crime? And just who is that croquet-playing man?

Tara Cariaso of Waxing Moon Masks has created a new set of masks for this production. Fitting for the outdoor venue, these masks brighter than the traditional stained leather of the Fools’ past productions. Commedia’s reliance on masks led to the development of the highly stylized physicality the genre is known for. In Missed Connections, Zoerb serves as the movement director and funny walks and postures abound. Quilpa’s Montoya gestures are as bombastic as his monologue; Connor, playing Bernard, makes his hands flutter like the wings of the insect he pursues; Cutcher’s Blackbird leans from one side to another like a lazy Eiffel Tower, ever ready to shift her shoulders to Terrill’s incidental music.

The script, written by the cast, may be a bit mad, and it may be unclear how many of these plot threads are truly tied up in the end, or even woven in the middle, but an afternoon spent in the park with these fools provides much laughter either way.

Missed Connections, written and performed by Faction of Fools and directed by Francesca Chilcote, runs at the Parks at Walter Reed through May 15. factionoffools.org. $15–$35.