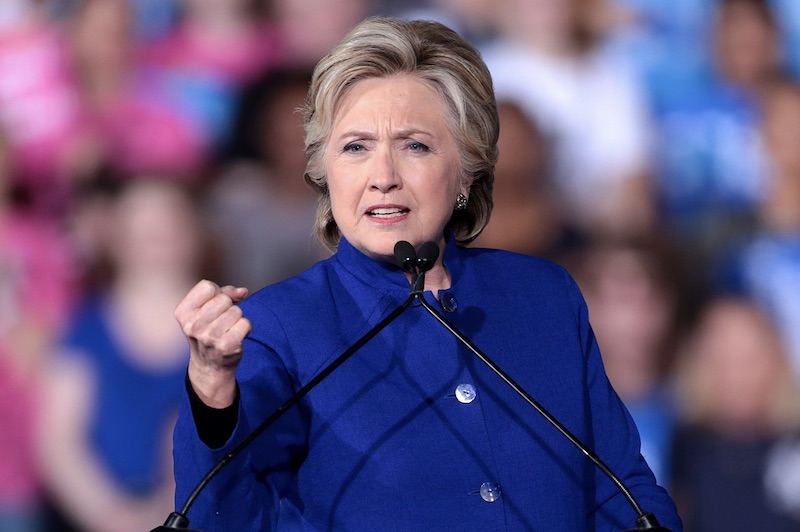 Former U.S. presidential candidate Hillary Clinton has suggested that Republicans sympathize with Russian President Vladimir Putin — and by extension, Russia’s incursion into Ukraine — because of his “anti-gay” and “anti-democracy” stances.

“I want to make sure within our own country that we are calling out those people who are giving aid and comfort to Vladimir Putin about what a genius he is, what a smart move it is, who are unfortunately, being broadcast by Russian media, not only inside Russia but in Europe to demonstrate the division within our own country,” Clinton said during a Friday appearance on the MSNBC show Morning Joe.

Maybe this terrible aggression by Putin will stiffen the spines of a lot of Republicans in office who understand you cannot continue to give Trump and his enablers a blank check because they will lead us to a very bad place,” she said, adding that “too many Republicans” are “naive in such a dangerous way.”

“They somehow believe that because Putin presents himself as a strong leader on behalf of certain values that are, anti-gay, that are anti-freedom and [anti-]democracy, that’s so messy, that somehow that corresponds with the views of certain members and elements of the Republican Party,” she added. “They could not be more mistaken. You know, this man…takes no prisoners, he kills them, poisons them, he imprisons them, whatever.”

Clinton called on the Biden administration to do more to help Ukraine defend itself, suggesting he send more U.S. troops overseas to help bolster Ukraine’s defense. She talked about the importance of defending NATO allies, and while Ukraine has previously been denied membership in NATO — primarily stemming from its failure to meet membership guidelines such as rooting out political corruption, ensuring fair treatment of minority populations, and maintaining a democratic system based on a market economy, among others — it has sought to join the organization in the past and has generally been aligned with NATO’s aim of keeping Russian aggression in check.

She also urged the administration and European allies to impose sanctions on both the Russian government, and on”individual actors within that economy all the way up to Putin.”

“I think that the only pressure that Putin would respond to or that could have any kind of impact on his thinking would be those who he relies on to launder his money to keep the funding going into his secret accounts,” Clinton added. “We’ve got to go after those oligarchs who are supporting Putin financially. They need to pay a price whether their yachts are seized or their homes are seized.”

While most elected Republicans have pushed back against claims that they are overly sympathetic to Russia, and have since blasted Clinton’s remarks on conservative news channels, there is a segment of Americans — primarily, although not exclusively, comprised of social conservatives who make up a significant segment of Republican voters — that has lavished praise on Vladimir Putin because of the Russian leader’s opposition to cultural liberalism and crackdown on LGBTQ rights, which Putin justifies by invoking Orthodox Christianity, claiming that Russian “traditional values” are under attack from Western influences.

For instance, Franklin Graham, the president and CEO of the Billy Graham Evangelistic Association, has praised Putin for using the country’s “gay propaganda” law to protect children from being exposed to “homosexuality and pedophilia.”

“To be clear, I’m not endorsing President Putin,” Graham wrote in a 2014 cover story for Decision magazine. “Isn’t it sad, though, that America’s own morality has fallen so far that on this issue — protecting children from any homosexual agenda or propaganda –Russia’s standard is higher than our own?”

Representing the right-wing populist segment of the GOP, Steve Bannon, a former adviser to former President Donald Trump, argued during a broadcast on his War Room show on Real America’s Voice that Americans should support Putin because of his opposition to LGBTQ rights, “wokeness” and other hallmarks of the cultural Left in America.

“Putin ain’t woke. He is anti-woke,” Bannon said to private military contractor Erik Prince during the broadcast, which occurred several hours before Russia’s invasion of Ukraine, according to Newsweek.

“The Russian people still know which bathroom to use,” Prince replied.

“They know how many, how many genders are there in Russia?” Bannon asked.

“How savage. How medieval,” Bannon said.

Other right-wing figures, including Fox News host Tucker Carlson, J.D. Vance, a GOP U.S. Senate candidate from Ohio, and conspiracy theorist and Infowars host Alex Jones, have employed similar arguments in favor of Russia, arguing or implying that the cultural Left (both domestically and globally) is more of an enemy than an aggressive, militaristic Russian regime that invades other countries.

It should also be noted that the American right-wing also has consistently praised the actions of other authoritarian governments, namely Poland and Hungary, which — while currently on the side of the United States when it comes to Russian incursion into Eastern Europe — have earned praise pundits and organizations for their efforts to crack down on social liberalism and LGBTQ rights more specifically. As Clinton suggests, being “anti-woke,” at least for some, it seems, is enough to justify praise, regardless of any other shortcomings.