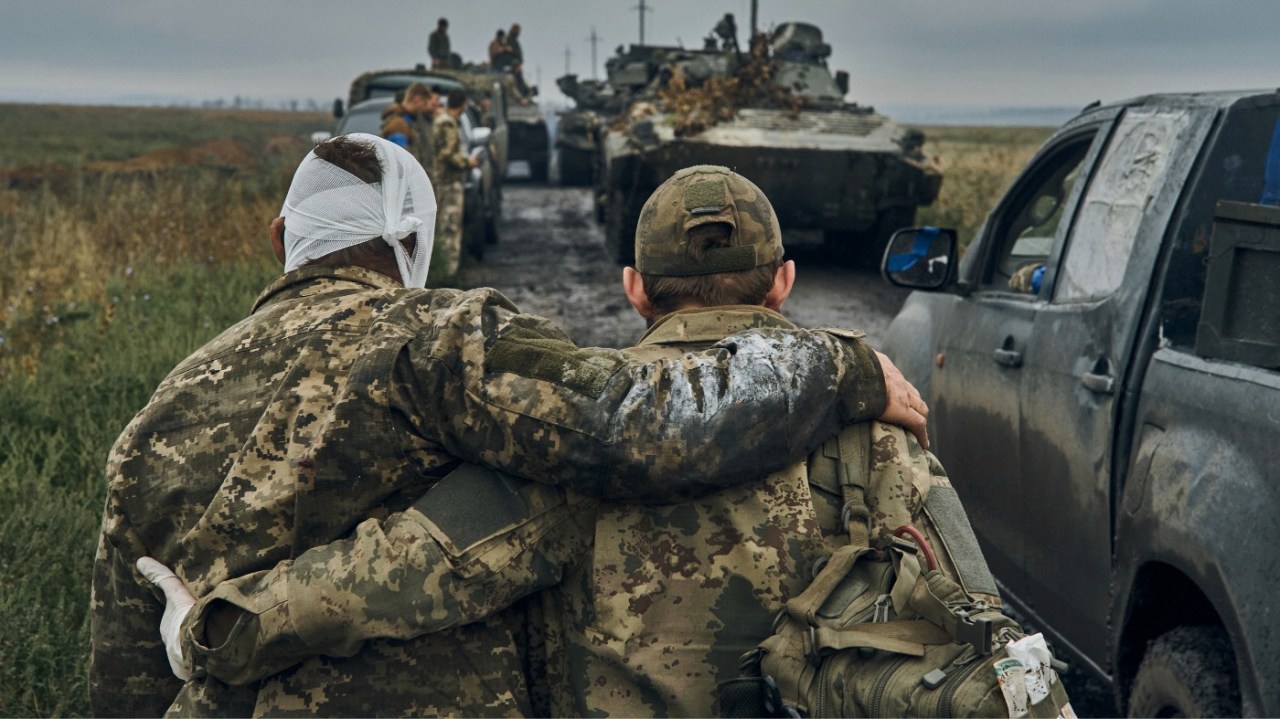 Once again Russian troops leave a trail of war crimes in their wake. They bombed hospitals and theaters in Mariupol; they shelled a shopping center in Kremenchuh; they tortured and executed hundreds of civilians in Bucha and Irpen. Now that Ukrainian forces have driven out the Russians from most of Kharkiv province, a score of atrocities has again come to light.

The strategically important city of Izyum, under occupation since April 1, appears to be one of the key centers of mass murder. Ukrainian officials have exhumed 50 corpses of civilians and found another 445 graves. One mass grave contains the bodies of over 20 Ukrainian soldiers: their hands were tied behind their backs and they were shot and killed. Oleh Kotenko, the Ukrainian official responsible for disappeared persons, believes the “number of dead in Izyum may exceed by several times the Bucha tragedy,” which involved over 400 dead. Photographs of the site are available here.

According to Oleh Synyehubov, the head of the Kharkiv Province State Administration, “Of the bodies that were exhumed today, 99 percent have signs of violent deaths. There are some bodies with their hands tied behind their backs, and one person is buried with a rope around his neck. It’s obvious these people were tortured and executed. Among the buried are children.” The United Nations High Commissioner for Human Rights intends to send investigators to Izyum to verify Ukrainian allegations.

Ukrainian officials have also uncovered 10 torture chambers throughout Kharkiv province, with two being in the city of Balakliya. In one of the Balakliya torture chambers, an unknown prisoner scratched the Lord’s Prayer onto the wall, in Russian — testimony yet again that Vladimir Putin’s claim to be liberating Ukraine’s Russians and Russian speakers is and always was hollow. One such chamber appears to have been located in the prison of the Kupyansk city district police. Cells meant to hold 140 prisoners came to house over 400, and prisoners were apparently forced to sleep standing up.

President Volodymyr Zelensky responded to the discovery of the mass graves with this statement: “The whole world should see this. A world in which there should be no cruelty and terrorism. But they exist. And their name is Russia. More than 400 bodies were found at the mass burial site in Izyum. With signs of torture, children, those killed as a result of missile attacks, warriors of the Armed Forces of Ukraine. Russia leaves only death and suffering. Murderers. Torturers. Deprived of everything human. You won’t run away. You won’t hide. Retribution will be justly dreadful. For every Ukrainian, for every tortured soul.”

These are exceptionally strong words, especially coming from a person who was raised in a Russia-friendly environment and never expected Russia to unleash a full-scale war against Ukraine. But Zelensky’s words don’t just signify the sea change that has occurred in his understanding of Russia; they also typify the views held by the vast majority of Ukrainians. Putin’s genocidal war has consolidated the formerly inchoate Ukrainian national identity that had been searching for a unifying idea since Ukraine’s independence in 1991. Today, like Zelensky, all Ukrainians know that they are exactly what Putin accuses them of being: an anti-Russia that is opposed to Russia’s brand of imperialism, fascism, and genocide.

Ukrainians now know who they are and who they are not. In contrast, Russians will soon face troubling questions with no comfortable answers. Why did they roundly and effusively support Putin for over two decades, even as he was openly dismantling Russia’s nascent democratic institutions, bullying Russia’s non-Russian neighbors, and striving for global military superiority? Why did they cheer him on when he illegally annexed Crimea in 2014 and unleashed a war against Ukraine that same year? And why do so many Russians still close their eyes to the ongoing genocide in Ukraine and pretend to believe that reports of atrocities are false?

Fortunately for Russia, an increasing number of Russians appear to be developing a backbone and moral conscience. Municipal officials in St. Petersburg and Moscow recently called for Putin’s dismissal. They were subsequently fined but not jailed — an act, not of kindness on the part of the authorities, but of fear that their anti-Putin views are spreading, as growing numbers of Russians learn their sons and husbands have died in Ukraine or see them return home maimed.

A strategy for success in Ukraine

And indeed, as of Sept. 13, 47 local officials had signed a petition that begins with the claim, “Vladimir Putin harms the future of Russia and its citizens.” According to Ksenya Torstrem, the municipal official from St. Petersburg who drafted the petition, the signers hail from “Nizhniy Novgorod to Yakutsk, from Novosibirsk to Tomsk. In general, from very many cities.” Importantly, the petition does not identify Putin as Russia’s president — because, having violated his “social contract” with the Russian people, the petitioners say he no longer is.

When he goes, Putin will be remembered for his atrocities and crimes. Ukrainians will damn him as they build a democratic state. Russians will also damn him, but their outrage will be sincere only after they damn themselves for their sins.

Alexander J. Motyl is a professor of political science at Rutgers University-Newark. A specialist on Ukraine, Russia and the USSR, and on nationalism, revolutions, empires and theory, he is the author of 10 books of nonfiction, as well as “Imperial Ends: The Decay, Collapse, and Revival of Empires” and “Why Empires Reemerge: Imperial Collapse and Imperial Revival in Comparative Perspective.”