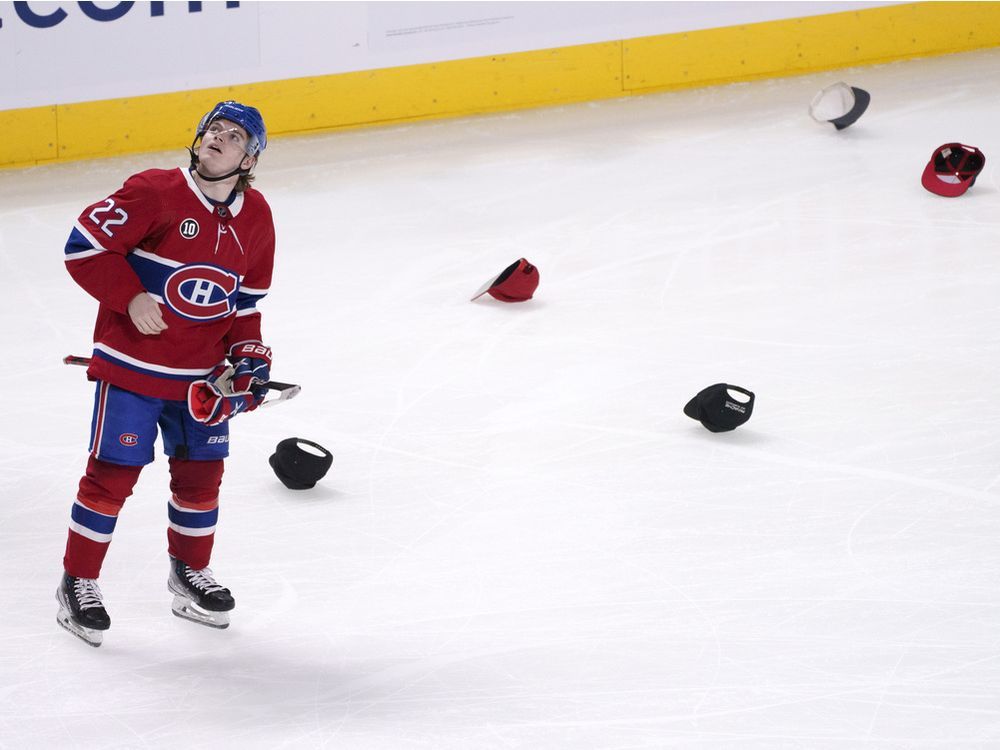 Cole Caufield wasn’t expecting to address the fans after the Canadiens’ 10-2 victory over the Florida Panthers.

“I think (Brendan Gallagher) sewered me,” said Caufield, who thanked the fans for their support in what has been a trying season for the Canadiens.

Caufield’s hat trick put an exclamation point on his rookie outing. He struggled for the first half of the season and was sent to the Laval Rocket at one point. He finished as the team leader in goals and the only rookie to score more goals this season was Nashville’s Tanner Jeannot with 24.

Among the players he finished tied with was Anaheim’s Trevor Zegras, a friendly rival and former teammate with the U.S. under-18 team.

“Obviously, it was a pretty tough start and it’s frustrating, it’s hard to hear negative comments about yourself, but I think I learned a lot about perseverance and sticking with it,” Caufield said. “It’s about finding your own self. The outside noise can break into you and do a lot of things that affect you. Going forward, I’m just going to use that motivation to get through the hard times.

“What’s important is what the guys in the room think about you, the coaching staff,” Caufield added. “It feels pretty good to get back to where you should be.”

“Cole can score, but there are other areas of his game where he needs to grow,” St. Louis said. “My job now is to make him a better hockey player.”

The season finale featured a strong performance from Carey Price. The Panthers rested four of their top five scorers, but Price made 37 saves for his first win of the season and Caufield said he gave the team a lift.

“It means everything (having him back),” Caufield said. “He’s the backbone of this team. He’s a guy you want to play for and just having him in the room every day you can just feel the energy he brings.”

“I think the win meant a lot,” St. Louis said. “He wanted to play at the end. The first two games we didn’t give him any run support and it  could have been different. I think him winning this game means a lot. I put myself in his shoes and what’s he’s battled, the level he’s playing in this league and his own expectation. The top guys in this league are really hard on themselves and for him to finish like this, I’m pretty happy for him.”

At the conclusion of the game, defenceman Alexander Romanov was presented with the Jacques Beauchamp Trophy, which is a sort of unsung hero award. After he played sparingly during the playoffs last year, the young Russian emerged as a top-four defenceman this season.