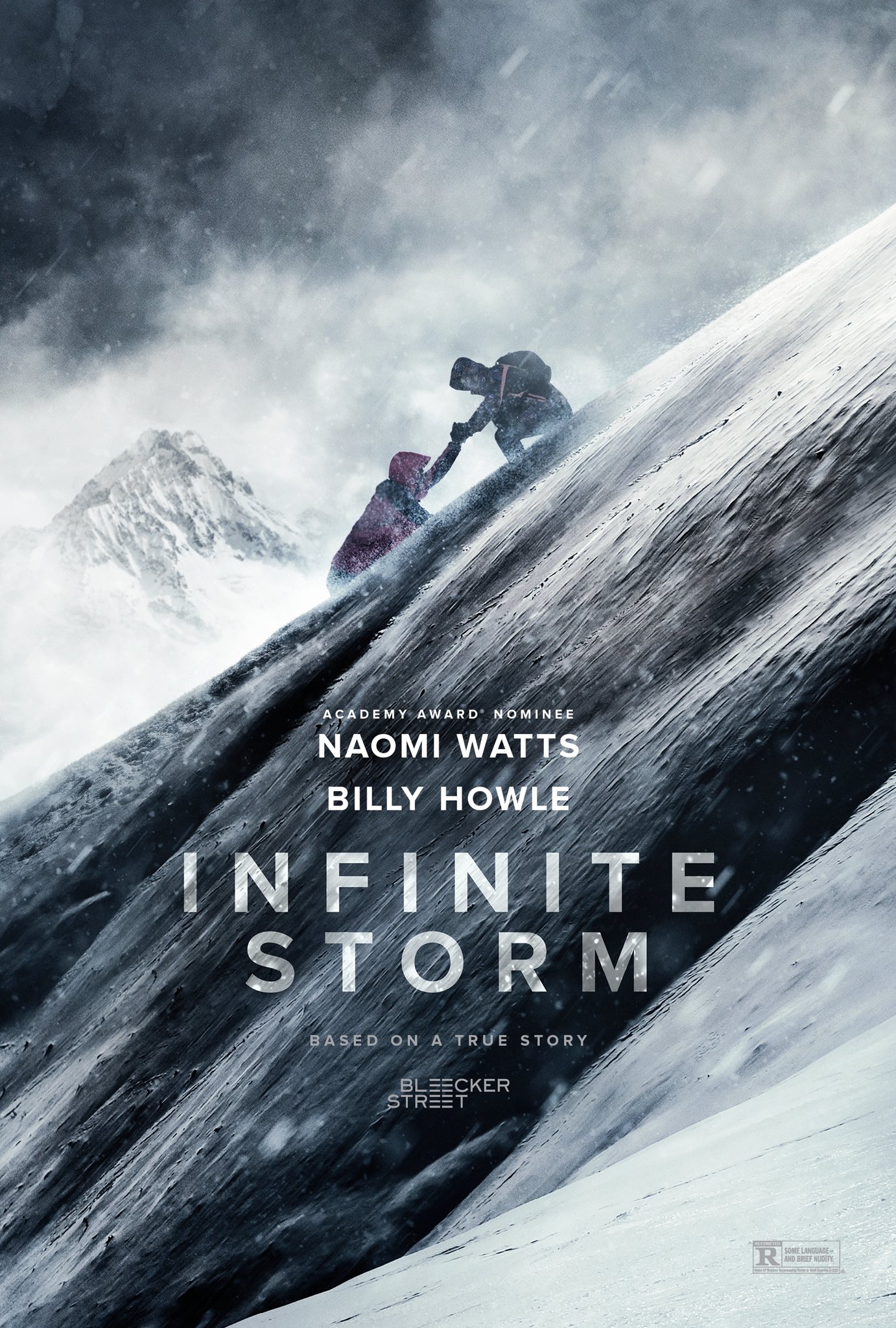 Among disaster movies, those that involve mountain climbers are often the most harrowing. Maybe it’s the combination of high altitude, exposure to the elements, and the physical strain of moving along something so imposing and vast. Climber confidence could be another factor: they dominate nature … until they do not. Films about them include scenes where—even at peak performance (pun intended)—we see the physical toll required before the endeavor inevitably takes a turn for the worse. The best climbing disaster films, such as the documentary Touching the Void, are intense and suspenseful enough to approach horror. Infinite Storm, the latest entry in this subgenre, at first attempts to continue in that tradition. In the hands of director Małgorzata Szumowska, New Hampshire’s Mount Washington is formidable and oppressive, but then the focus shifts the hero’s incomplete personal growth.

The opening passages are typical—an opportunity to familiarize the audience with the climber’s skill and resolve. Naomi Watts plays Pam Bales, a woman who goes through many routines before climbing begins. She lays out all her gear on a table, double checking it can account for every possible contingency. She leaves multiple copies of her itinerary, including on the windshield of her car just in case the worst befalls her. A man at a camping lodge (Denis O’Hare) hassles Pam because a storm might be brewing. She tolerates it because at least he now knows what she has planned for the day.

Ignoring the man and any suggested caution from weather reports—Mount Washington is known for its erratic weather—she soon finds herself in harsh conditions. She falls into a mini-crevasse, but keeps her wits about her as she manages to crawl out. The real test comes later, when she sees footsteps in the snow. That is alarming enough on its own, but they’re not just any footprints: They belong to sneakers. She correctly realizes someone else is on the mountain, and they’re wholly unprepared for its challenges.

The sneakers belong to John (Billy Howle), a young man who is sitting on the peak, completely exposed to the elements and on the brink of death. Infinite Storm follows Pam rescuing John, which would be arduous enough on its own, but is made worse by his stubborn unwillingness to cooperate. In fact, Pam makes up the name “John” just so she has a name for this barely responsive person she’s attempting to save. Soon enough they start walking, contending with injuries and one calamity after another. Sound effects and distorted visuals are effective in part of the film, creating a sense of disorientation for both characters. The anxiety is heightened by the complication that Pam effectively must handle the situation for two.

There is nothing revelatory here because Szumowska seems to have internalized that, as long as she adhered closely to them, genre tropes would work in the film’s favor. At first, it seems that Mount Washington will be a character for most of the film’s duration, as is common with movies about Everest, Mont Blanc, or other formidable mountains, but then Infinite Storm resolves its survival story earlier than the genre normally allows. The reason for this is source material: screenwriter Josh Rollins draws from an article in the New Hampshire Union Leader, one where the climbing action is not at the forefront, and Rollins also frames the narrative so Pam’s feelings about the rescue matter more than the rescue itself. In practical terms, it means we do not see Pam and John in harm’s way for that long, and instead we see the lengthy emotional fallout from their time on the mountain together. Watts is a terrific actor, one whose intelligence and commitment cannot always be met in the roles she’s given. Here she fails to engage because the growth Pam experiences is an afterthought. We know this is a formative experience for her because a title card tells us. A better film would communicate her newfound purpose through the drama itself and Watts’ performance.

In addition to Pam’s struggle, the film supplies her with flashbacks—the purpose of which remains obscure for most of the film. In several scenes, we see Pam recall a happier time, one where she played with several children. Only the final scenes reveal the significance behind these flashbacks; until that point they mostly serve as a distraction from Pam’s immediate survival needs, making their purpose, ultimately, perfunctory.

Infinite Storm suffers from an identity crisis: it wants to be a survival thriller, and a feel-good drama about one woman’s newfound calling at middle age. Ironically, Pam’s purpose on the mountain was always clear to her, and Szumowska distorts her single-mindedness until the film suffers along with it.