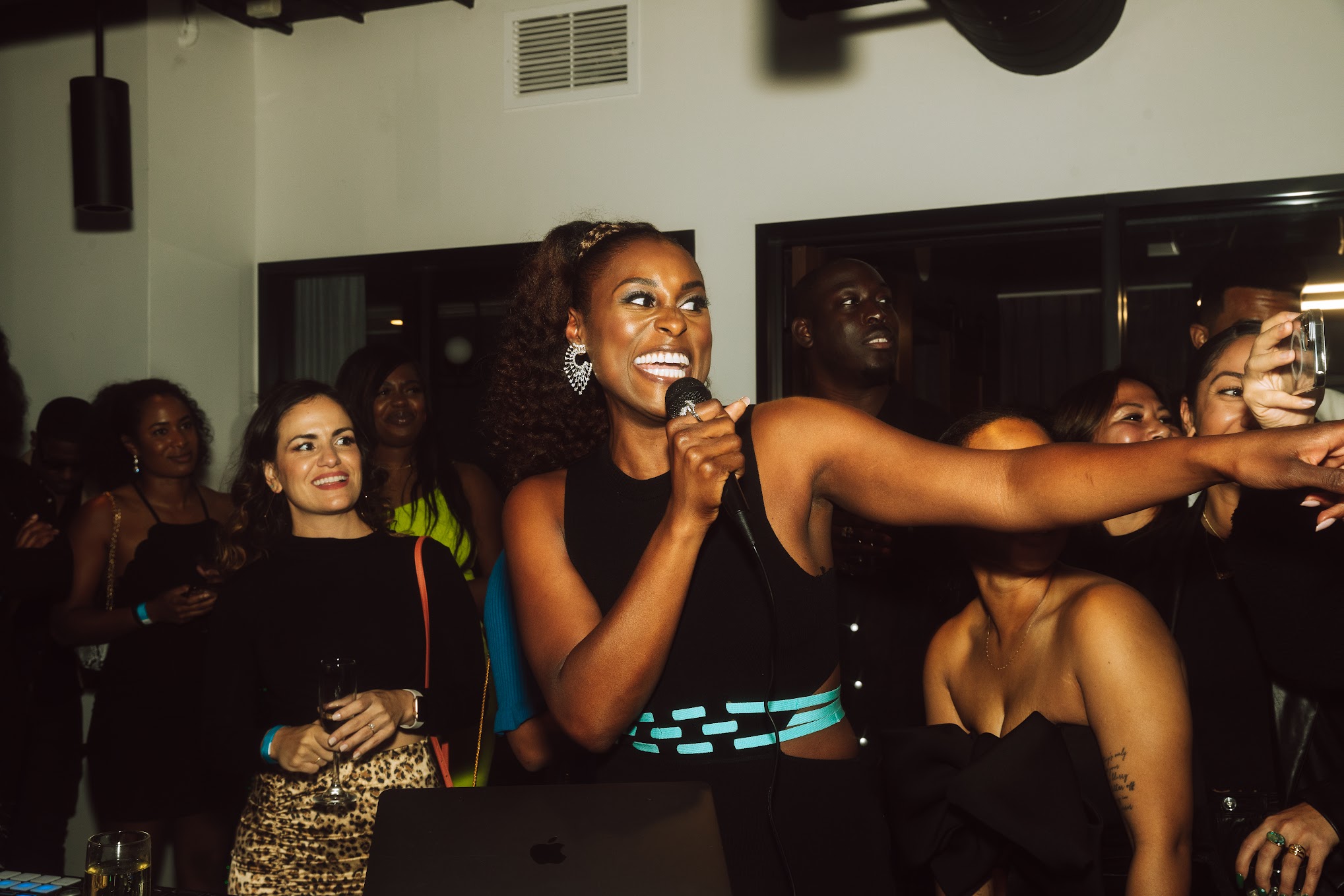 New York and L.A. are often the first cities that come to mind when you think of big names and mega-art entertainment, but not this time. HOORAE, Issa Rae’s multi-faceted entertainment media company, is taking over D.C. this weekend, March 25 to 27.

“D.C. isn’t like other markets. [The city is] often overlooked and people feel like if they aren’t in L.A., N.Y., or some of these other major markets, then they won’t have the same opportunities,” says Morgan Davis, the director of brand partnerships, events, and artist relations at HOORAE. The company, which Rae founded in 2020, houses HOORAE Film & TV, ColorCreative Management, and the audio arm, Raedio.

“I remember our company before it was HOORAE, when it was just Issa Rae Productions,” Rae, who grew up in Potomac, told the audience during the VIP HOORAE welcome event at The Gathering Spot on I Street NW Thursday. “It was about four people and we took pride in having ideas and ideating—felt like we had the world in our hands and we would spit them out and we would execute them.”

A central message of Rae’s HBO series, Insecure, which concluded late last year, is the power of making underrepresented communities feel seen. Episodes like season four’s “Lowkey Feelin’ Myself,” which revolves around an Inglewood block party, where Rae highlights local businesses, and those gentrifying her neighborhood, is a perfect example of her reaching back to pull up her community as she continues to succeed. (To celebrate various seasons of the show, Rae has also hosted her own Inglewood block parties along L.A.’s Market Street.)

Now she’s sending a similar message to D.C. by partnering with several local creatives to bring the HOORAE x Kennedy Center Takeover to life. During a red carpet interview during the 2017 Emmys, Rae made the viral statement, “I’m rooting for everybody black,” and she’s continuing to live this out by making sure communities feel seen on and off screen.

Rae’s company tapped THFCTRY, a D.C.-based radio show airing from the lobby of the Eaton Hotel, to help curate activations for the weekend.“Morgan reached out in the fall to learn what was going on, and who was making things happen in D.C.,” says Matt Jackson, co-founder of THFCTRY. “You never know when something major like this will come to D.C., so we were lucky to be in good shape creatively.” THFCTRY will co-host Raedio Silence, a party happening Friday night, as well as a Saturday afternoon Eaton Radio takeover with local women DJs such as DJ Heat.

Dominique Wells, aka Domo, a music and culture editor at Spotify, originally from the DMV, played a key role in introducing D.C. talent to Rae’s team.

“For me, this was a look through Domo, me and her have done parties before and we always do parties well together, so she had the opportunity to do this party and she brought me along,” says KMeta, DJ and creator of the popular Everything Nice party series. He will be DJing Friday’s No Weird Shit Party at the Kennedy Center along with Domo. “It’s a great look for the city and the creators in the city. We have so many talented people who sometimes don’t get a shot to show people what they can do,” KMeta continues. Along with his and Domo’s set, DJ Little Bacon Bear hosted Thursday night’s welcome party, and Malcolm Xavier hosts the Find Your People Party on Saturday.

Beyond a bevy of parties taking over the Kennedy Center, the now sold out weekend includes film screenings and discussions and supporting activations at the Eaton Hotel. There’s also Short Film Saturday, which will feature works by creators of color. On Sunday there will be The Read Comedy Album Live Preview. Closing out a weekend of programming is A Sip, a “fireside chat” with Rae and actor Keke Palmer taking place at the Kennedy Center .

“It’s kind of like trying to plant a flag here and tell people you can flourish where you are. We see you, and we recognize you,” Davis says.

Instead of people feeling like they have to leave D.C. to have rich creative experiences, Davis notes that HOORAE wants to have a presence in D.C.

D.C. is a talent rich city, HOORAE sees this wealth, and is dialed in.