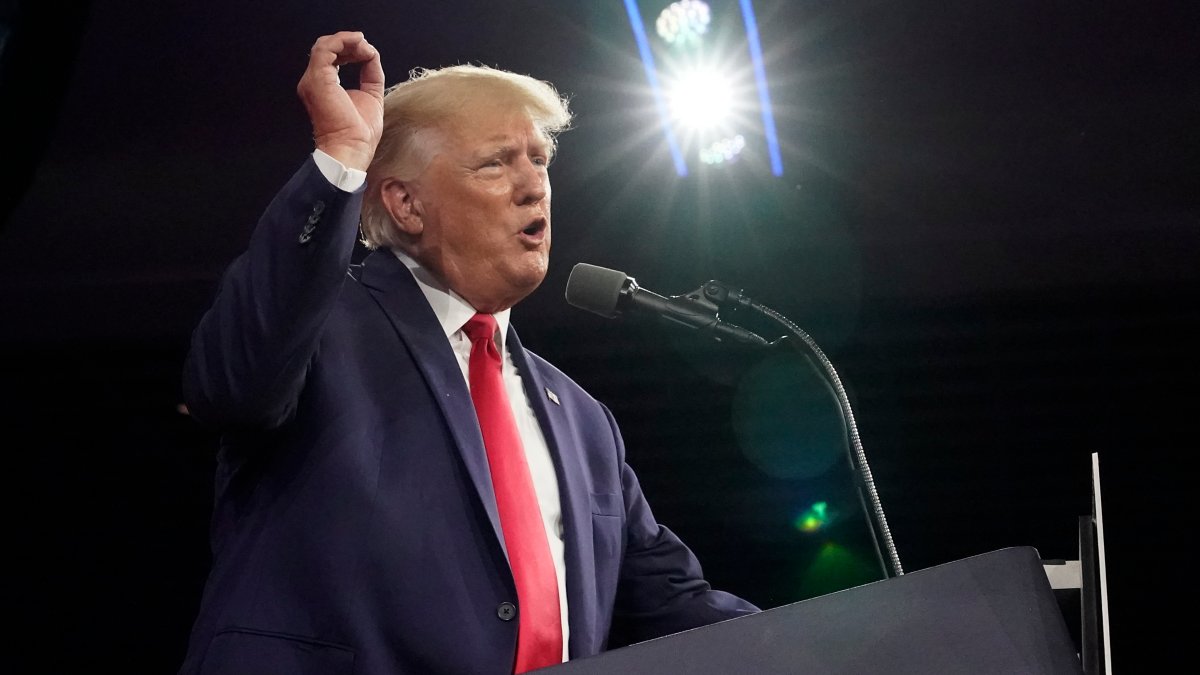 The House committee investigating the U.S. Capitol insurrection said Wednesday night that its evidence shows former President Donald Trump and his associates engaged in a “criminal conspiracy” to prevent Congress from certifying the results of the presidential election, spread false information about the outcome and pressured state officials to overturn it.

The committee made the claims in a filing in response to a lawsuit by Trump adviser John Eastman. Eastman, a lawyer who was consulting with Trump as he attempted to overturn the election, is trying to withhold documents from the committee as it investigates the Jan. 6, 2021, insurrection. The committee argued there is a legal exception to attorney-client privilege allowing the disclosure of communications regarding ongoing or future crimes.

“The Select Committee also has a good-faith basis for concluding that the President and members of his Campaign engaged in a criminal conspiracy to defraud the United States,” the committee wrote in a filing submitted in U.S. District Court in the Central District of California.

The 221-page filing marks the committee’s most formal effort to link the former president to a federal crime, though the actual import of the filing is not clear since lawmakers do not have the power to bring charges on their own and can only make a referral to the Justice Department. The department has been investigating last year’s riot, but has not given any indication that it is considering seeking charges against Trump.

“The evidence supports an inference that President Trump and members of his campaign knew he had not won enough legitimate state electoral votes to be declared the winner of the 2020 Presidential election during the January 6 Joint Session of Congress, but the President nevertheless sought to use the Vice President to manipulate the results in his favor,” the filing states.

The brief filed Wednesday was in an effort by the committee to refute attorney-client privilege claims made by Eastman in order to withhold records from congressional investigators.

“The Select Committee is not conducting a criminal investigation,” Mississippi Rep. Bennie Thompson, the committee’s Democratic chairman, said in a statement. “But, as the judge noted at a previous hearing, Dr. Eastman’s privilege claims raise the question whether the crime-fraud exception to the attorney-client privilege applies in this situation.”

A request for comment from Eastman’s lawyer was not immediately returned.

The committee said it found evidence that Trump sought to obstruct an official proceeding — in this case, the certification of the election results — by trying to strongarm Pence to delay the proceedings so there would be additional time to “manipulate” the results.

In a Jan. 6, 2021, email exchange between Eastman and Jacob, Eastman pushes for Pence to intervene in his ceremonial role of overseeing the certification of the electoral votes.

Jacob replies: “I respect your heart here. I share your concerns about what Democrats will do once in power. I want election integrity fixed. But I have run down every legal trail placed before me to its conclusion, and I respectfully conclude that as a legal framework, it is a results-oriented position that you would never support if attempted by the opposition, and essentially entirely made up.”

He added, “And thanks to your bulls—-, we are now under siege.”

In other transcripts released as part of the filing, former senior Justice Department official Richard Donoghue described trying to convince Trump that claims of election fraud were pure fiction. “I told the President myself that several times, in several conversations, that these allegations about ballots being smuggled in a suitcase and run through the machines several times, it was not true, that we had looked at it, we looked at the video, we interviewed the witnesses, and it was not true.”

At one point, Donoghue said, he had to reassure Trump that the Justice Department had investigated a report that someone has transported a tractor-trailer full of ballots from New York to Pennsylvania. The department found no evidence to support the allegations, Donoghue said.

The transcripts shed colorful detail on a contentious Jan. 3, 2021, meeting at which Trump contemplated replacing his acting attorney general, Jeffrey Rosen, with an assistant who promised to get to the bottom of the president’s bogus claims of election fraud.

That assistant, Jeffrey Clark, had been the department’s top environmental enforcement lawyer for a period, a fact that led to some derision from colleagues at the meeting when it was pointed out that Clark had not been a criminal prosecutor.

“And he kind of retorted by saying, ‘Well, I’ve done a lot of very complicated appeals and civil litigation, environmental litigation, and things like that,’” Donoghue said. “And I said, ‘That’s right. You’re an environmental lawyer. How about you go back to your office, and we’ll call you when there’s an oil spill.’”

The filing was the most comprehensive preview yet of the findings of the committee, which is investigating the violent insurrection of Trump’s supporters in an effort to ensure that nothing like it happens again. While the panel can’t pursue criminal charges, members say that they want the public to have a thorough account of the attack, in which hundreds of people brutally beat police, pushed through windows and doors and interrupted the certification of President Joe Biden’s win.

So far, lawmakers and investigators have interviewed hundreds of people, including members of Trump’s family and his chief of staff as well as his allies in the seven swing states where the former president tried and failed to prove he won. The panel has also sought out information from members of Congress and subpoenaed records and testimony from top social media platforms they believe had a hand in the spreading of election misinformation.

The committee is expected to fully release its findings in a lengthy report or series of reports later this year, ahead of the midterm elections. The panel is also planning days or weeks of hearings starting in April with some of the witnesses who testified.