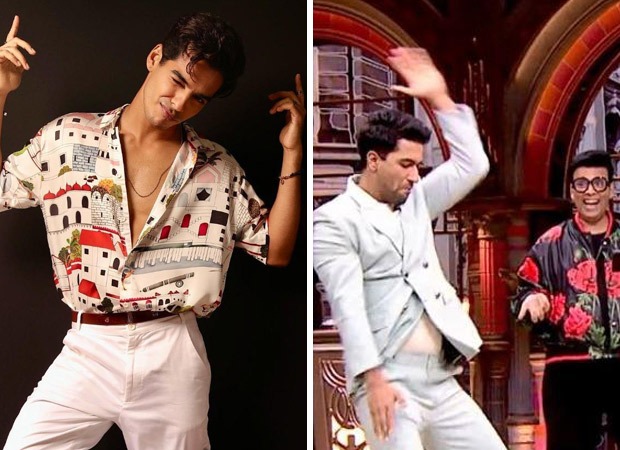 The recent episode of Koffee With Karan 7 saw Katrina Kaif appearing on the show for the first time post marriage. While her better half Vicky Kaushal has already made it to the couch earlier with Sidharth Malhotra, now Katrina appeared on the show with her Phone Bhoot co-stars Siddhant Chaturvedi and Ishaan Khatter. During the episode while answering the Vicky-Kat quiz, the actress spoke about a sweet gesture of Vicky dancing to her dance numbers and Ishaan couldn’t control but think about the Masaan actor dancing to ‘Chikni Chameli’ and ‘Sheila Ki Jawani’.

During the Rapid Fire round, Karan Johar asked Katrina Kaif to talk about the sweetest gesture that Vicky Kaushal did for her. The actress recalled the time when they were celebrating her birthday. “On my birthday, I was just recovering from being very unwell. I had a very tough time with Covid. He could sense that I was not having a good time and somehow, he just turned the switch. He did a 45-minute concert of every single song of mine and danced entire songs. And everyone sat down, and stopped dancing. Everyone was like, ‘How does he know every step?’ The steps weren’t perfect but he just got the vibe, and danced it through. But the reason behind it was to make me laugh,” she said.

While Ishaan Khatter, Siddhant Chaturvedi, and Karan Johar couldn’t stop appreciating the lovely gesture of the Uri actor, Karan said, “It was like your own little performance.” On the other hand, Ishaan commented on it saying, “Petition to release Vicky Kaushal’s version of ‘Sheila Ki Jawani’ and ‘Chikni Chameli’.” Responding to it, Katrina revealed that she has a video of her husband dancing to these iconic numbers. She said, “I have. I will show it to you.”

Koffee With Karan 7 premieres on Disney+Hotstar every Thursday at 12am.

Also Read: Katrina Kaif kicks off PhoneBhoot promotions with Siddhant Chaturvedi and Ishaan Khatter: “Back with my boys”