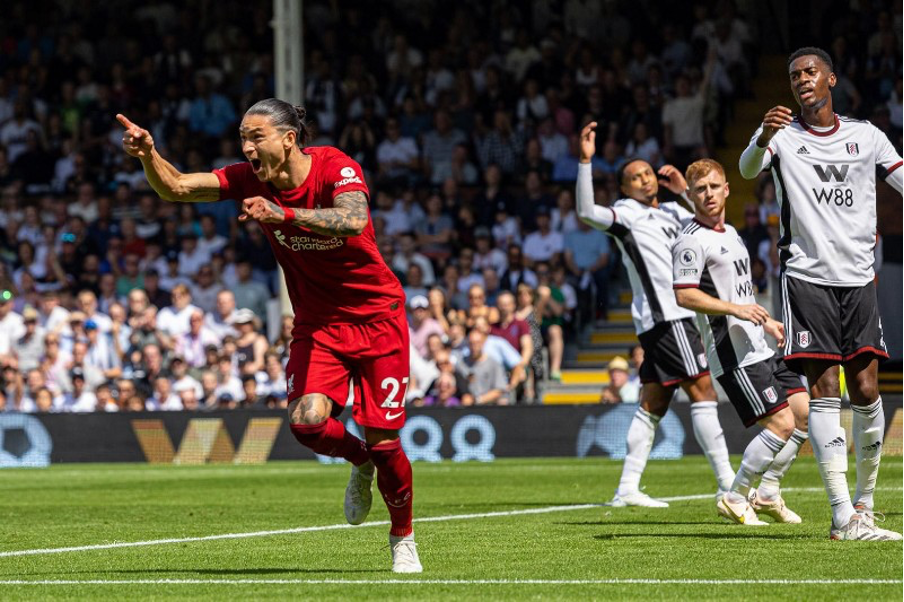 Liverpool on Saturday started the Premier League 2022/23 season with a 2-2 draw against Fulham, thanks to the equivalent of Darwin Nunez.

Liverpool was shocked by the home team’s fast and mobile football at Craven Cottage. Fulham players close quickly, and collisions are required to break the Jurgen Klopp’s structure.

It was a huge success when Fullham’s kick causes Liverpool to lose the connections. Thiago Alcantara, Fabinho, and Henderson struggle to hold the ball in midfield.

There were numerous bad passes in both Liverpool’s half and the midfield. This forced Roberto Firmino to drop to a very low position in order to join in the dispute. As a result, the away team was unable to launch an attack.

Alexander-Arnold was unable to prevent Mitrovic from scoring after more than 30 minutes. In this situation, Liverpool’s left wing was also unable to withstand the overlapping Fulham players, before Kenny Tete easily made the pass as set for a teammate to score.

Earlier, a broken pass from Henderson provided the ball that led to the first goal.

Liverpool couldn’t attack until Mitrovic scored, and it was easy to lose the ball. There had not been a single accurate shot on goal by Marek Rodak after 45 minutes.

The match was no different in the first few minutes of the second half. The turning point just came in a way that Liverpool manager Klopp did not want.

Thiago injured should be replaced by Harvey Elliott. Klopp had another change when Darwin Nunez was introduced to replace Roberto Firmino.

The Nunez effect is direct. He attacks directly, is quick, fights fiercely, and is eager to express himself.

Liverpool’s attack is different from before, and Nunez assisted Mohamed Salah in connecting with the team. The Premier League’s top scorer last season was completely burned in the first 50 minutes.

Nunez was able to close and complete a skilful heel thanks to a lovely feed from Salah from the right. Rodak, the goalkeeper, made a good decision and quickly blocked the shot.

The problem of Liverpool’s downline continued to arise, when Virgil van Dijk made a mistake in blocking Mitrovic, leading to a penalty that the Serbian himself successfully finished.

Nunez became the real hero of Liverpool. The neat ball of the former Benfica player became an assist for Salah to equalise 2-2.