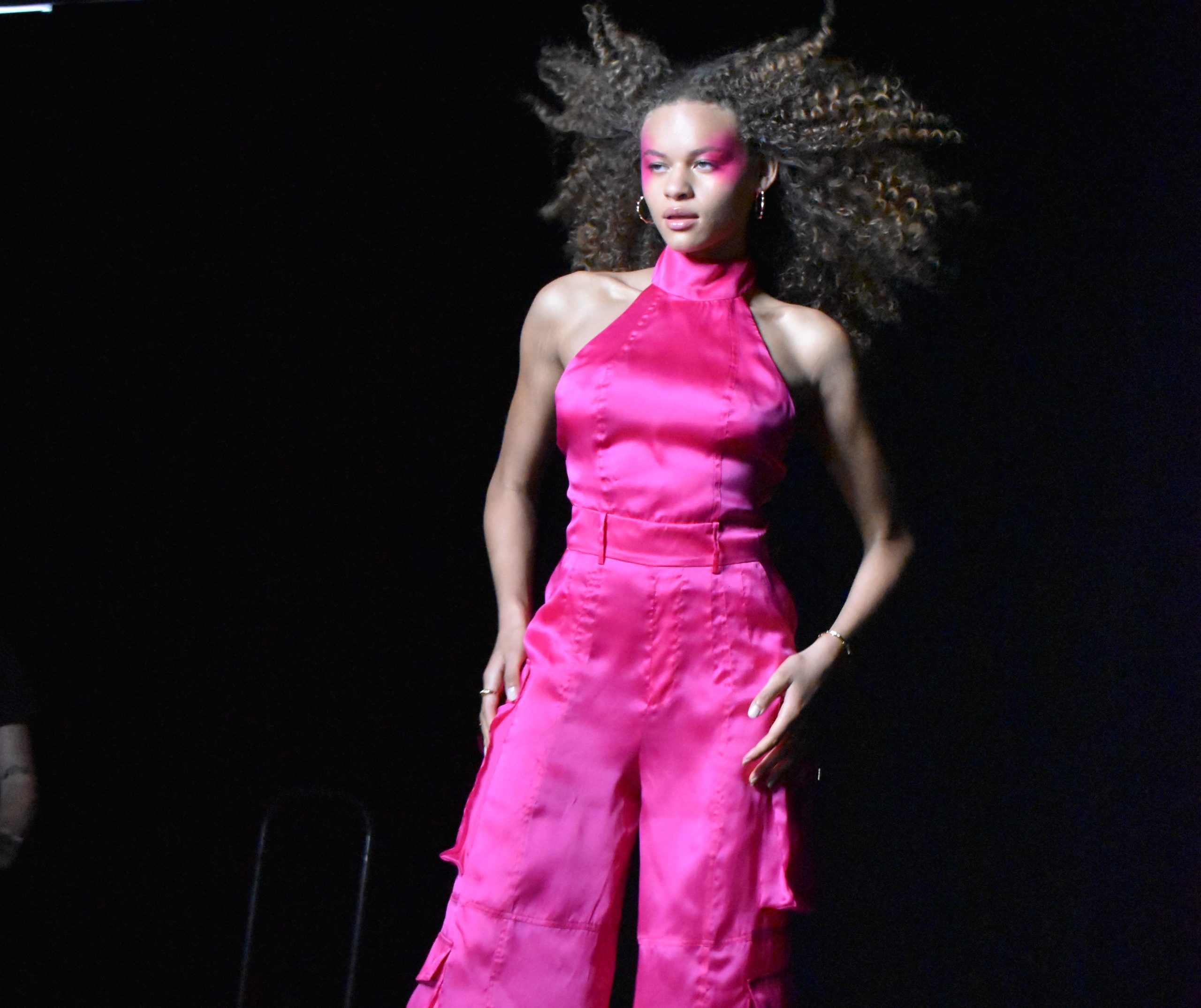 The internet might be fashion designer Anifa Mvuemba‘s greatest asset. In 2020, her Pink Congo Instagram Live runway show sent 3D models, mimicking femme bodies, down the runway wearing her curve-friendly silhouettes. The show went viral, turning the fashion industry on its head. Not only did it create greater excitement around her Hanifa brand, but it also encouraged the industry to rethink digital presentations of fashion collections. A year later, once the ban on in-person events was lifted, she did it again by transforming the National Portrait Gallery into a whimsical reality for her first ever in-person show. The show, titled Dreams, offered a meditation on her career journey since launching Hanifa in 2011 and showcased her commitment to the D.C. area.

Always ahead of the curve, Mvuemba was exploring the digital world of fashion prior to the pandemic and was seeking out the ideal situation to combine her love of graphic design with technology. The 30-year-old always enjoyed exploring the many facets of design, and virtual reality, she notes, was naturally the next realm to conquer. And conquer she did. Following her 2020 Instagram show, Hanifa saw increases in sales and an expanded audience base.

Although New York is considered America’s fashion capital, Hanifa is headquartered in Baltimore. Born in Nairobi, Kenya, Mvuemba migrated to the nation’s capital with her family in 1993. While attending Gaithersburg High School, where she took part in a fashion program, Mvuemba began to develop her fashion point of view. Today she credits her high school program director for inspiring her career in the fashion industry. But her study of fashion truly took flight in Baltimore, where she enrolled in fashion courses at Morgan State University and learned to sew.

Shortly before her birthday in 2011, Mvuemba tells City Paper she was unable to afford a new dress. Instead of wearing a recycled outfit for her party, she made a chartreuse tube dress. She shared—and modeled—her work on Instagram, and suddenly requests started flooding in. Her friends wanted Mvuemba dresses and Hanifa was born.

A decade later and the brand is shaping the industry, from how collections are showcased to who wears Mvuemba’s designs. Today, Hanifa is worn by A-list celebrities like Beyoncé, Gabrielle Union, Ashley Graham, and Sarah Jessica Parker. However, women of all body types and economic classes are wearing her designs, thanks to its inclusive sizing and accessible price points. The prices of her latest collection range from $179 to $2,400. “We consider the fit and lifestyle of everyday women for each of our collections. We have more in common with each other than social media may portray,” she says.

Regarding Hanifa’s 28-piece summer 2022 collection, Live Out Loud, Mvuemba says, “I strongly believe that fashion should not be limited.” Like the majority of her pieces, which are known for being ultra-feminine, bold in color, yet approachable in design, Live Out Loud features ruffled and feathered dresses, baggy cargo pants, and sexy cutouts.

In June, Live Out Loud was presented via Hanifa’s YouTube channel, marking another first for the designer. While the collection took months to produce, the digital show, complete with a green screen catwalk, was cast and filmed over a week in a Brooklyn studio.

“We like to have options and versatility. Whether in 3D or in real life, we prefer whichever platform will tell the story of our collection at that time, while expressing the women behind the clothes,” she says.

In Mvuemba’s eyes, the people who wear her clothes are multifaceted and highly passionate about life, a meaning that transcends celebrity status. “She’s unstoppable in any capacity or field of interest. Most importantly, she’s a girl’s girl who loves to see women win,” Mvuemba says.

Her spring/summer 2022 collection continues to explore themes of women’s empowerment. “Living out loud means to live freely, authentically, and confidently,” she says. “Our brand ethos is a distinct call-out to women who are limitless, and bold in every aspect of their lives, not just their fashion choices.”

The collection is an “explosion of color” that embraces texture, and movement. The designer notes that the warmer months symbolize growth and blossoming, akin to Hanifa’s more than 10 years of influence on millennial women who are evolving in their lives and their careers. “We inspire each other to pursue more,” she says.

And like the women who wear it, Hanifa continues to evolve. Under the brand, Mvuemba plans to continue cultivating her mentorship program, which she started in 2020. Concepts by Anifa M. aims to equip emerging designers in every capacity with the tools they need to launch and build a successful brand. The program launched with an eager class of 15 young designers ready to learn. “We’re currently working on refining the program to guide emerging talent on what they need to launch and/or scale their design business, fashion or otherwise,” Mvuemba says. As she continues to expand her fashion dynasty with Hanifa, Mvuemba is also looking to debut collections in both bridal wear and beauty.

Growing up in the D.C. region and making her home base in Baltimore remains part of what makes Mvuemba and her brand unique. She wants to show designers and fashion lovers alike what’s possible to build in your own backyard when you’re dedicated to putting in the work. “I want emerging designers to know that they can launch and scale their business from the place that grounds them,” says Mvuemba.