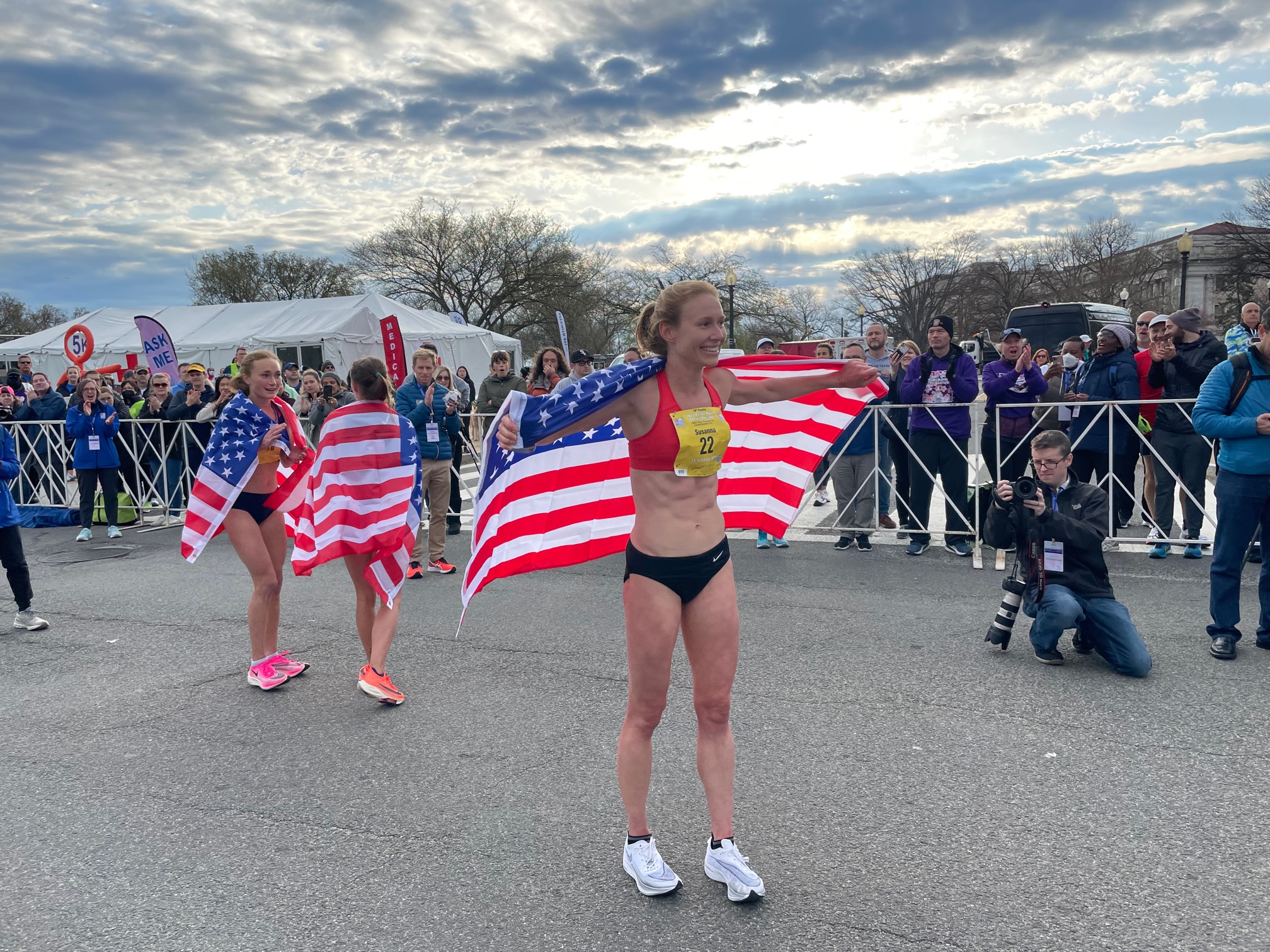 After a week of unpredictable conditions from pop-up hailstorms to tornados, Sunday morning delivered idyllic race conditions for the 2022 Cherry Blossom Ten Mile Run. And despite an elite women’s field of top runners that included Olympians and sponsored professional athletes, the perfect weather (upper 40s, virtually no wind) also delivered a local winner for the first time in 40 years.

Susanna Sullivan, a 31-year-old fifth grade teacher from Reston, who is unsponsored, may not have been the pre-race favorite, but she had the advantages of running a route ingrained into her physical memory. She runs every weekend at East Potomac Park and Hains Point and knows every tangent of the roads that comprise the “runners’ right of spring.” All she needed was the perfect day.

“I knew that if the conditions were right—and they were—and if I had the motivation with a lot of fast women chasing me, that it could happen,” says Sullivan, who pulled away about halfway in and held off the field to win the women’s elite race. “I think this is the first time I really believed it could, so it’s exciting that it panned out.”

She became the first D.C.-area winner since Eleanor Simonsick, then a D.C. resident, won in 1982. This is the second straight year that an American woman has won the race against an international field after Nell Rojas won last year’s edition.

Sullivan sat at the front of a group of about 15 runners that immediately established the front of the women’s elite race. Within the 5:19 first mile, that group had winnowed to eight as the race crossed over and back on the Memorial Bridge. By the time they crossed the 4-mile mark at 21:10, just five runners remained up front, all Americans: Sullivan, Sarah Pagano, Carrie Verdon, Paige Stoner, and two-time Olympian Kim Conley.

But it was Sullivan who emerged from that group as the course reached the halfway mark, zagging back across the Tidal Basin. She opened up a 10-meter gap that slowly stretched to 20, 40, even 50 meters as she split the rows of cherry blossom trees lining East Potomac Park.

“I felt like from (mile) 5 to (mile) 7 I was putting some distance on them, and I could tell with the splits that I was accelerating a little, which was a little surprising to me,” Sullivan says. “I have gotten a lot stronger, so it wasn’t, like, inconceivable, but in the past, I’ve been one to fade. So when I knew I was accelerating I figured I was probably pulling away a bit.”

Sullivan’s pace slowed slightly after making the turn around the point for home, as Verdon and Stoner broke from the remaining chasers and started closing the gap. But their push wasn’t enough to catch Sullivan, who crossed the line in 52:32, smashing her old personal best of 54:22 by nearly two minutes. Verdon, also a schoolteacher from Boulder, Colorado, finished five seconds back, with the Charlottesville-based Stoner a second behind her, making for two Virginia residents on the podium.

“In the last mile, I was quite nervous, because it seemed like the energy was really picking up, and I couldn’t tell if that was just because I was leading or because I was being closed on,” Sullivan says.

Nearly 15,000 runners finished the 49th edition of the 10-mile race, which has not been run in its normal, springtime slot since 2019. The finishers included Secretary of the Interior Deb Haaland, who crossed the line in just under two hours at 1:58:37.

As the course doubled back on itself down Independence Avenue SW, the massive crowd running several miles behind the elite women’s field cheered them on heartily as they passed.

This was Sullivan’s seventh time running this race, and while she’d always placed well, she’d never finished higher than eighth place and was coming off a 12th-place finish in last year’s rescheduled event. Breaking the tape was a much bigger story both for her on Sunday, and likewise when she returns to the classroom this week.

“A lot of time, my running means nothing to my kids,” says Sullivan, who teaches at Haycock Elementary in Falls Church. “If I tell them I won Cherry Blossom, that will mean something.”