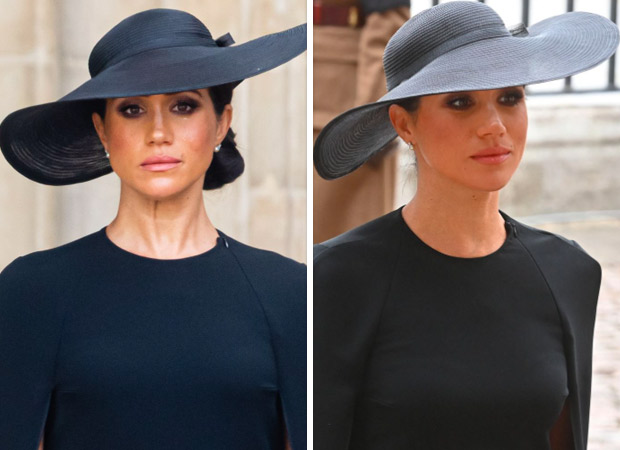 Duchess Of Sussex Meghan Markle joined the royal family to honour the life of Queen Elizabeth II at her state funeral. The Queen, who died at the age of 96, was the longest reigning monarch in British history. In honor of the monarch, the Duchess of Sussex chose to wear a round-neck dress with a subtle black cape, pairing it with understated diamond-and-pearl earrings gifted to her by the queen during her engagement.

Back in 2018, Meghan wore the same dress in navy to a televised concert at London’s Royal Albert Hall in honor of the Queen’s 92nd birthday. Meghan completed her funeral attire in black pumps, black gloves and Cartier’s Love bracelet in yellow gold. She previously wore the same earrings during ceremonial funeral events last week honoring the late British Monarch. On Wednesday, she reportedly wore the earrings as the Queen’s coffin ceremoniously processed from Buckingham Palace to Westminster Hall.

As per a report by People magazine, the Queen had graciously gifted jewellery to her female relatives through the years, presenting Meghan with the elegant earrings in honour of their first solo outing together in 2018. The late sovereign was famously a fan of pearl accessories, and the earrings she gave Meghan appeared to be a smaller version of one of her own go-to pairs.

Meghan previously spoke about her relationship with the Queen and how the late monarch treated her during their first engagement together, when the earrings were gifted to her, in her March 2021 Oprah interview. “The queen, for example, has always been wonderful to me,” Meghan said then. “I mean, we had one of our first joint engagements together. She asked me to join her, and I went on the train.

“And we had breakfast together that morning and she gave me a beautiful gift and I just really loved being in her company, and I know we were in the car—Yeah, she gave me some beautiful pearl earrings and a matching necklace—and we were in the car going between engagements. And she has a blanket that sits across her, her knees, for warmth and it was chilly and she was like, Meghan, come on, and put it over my knees as well.”