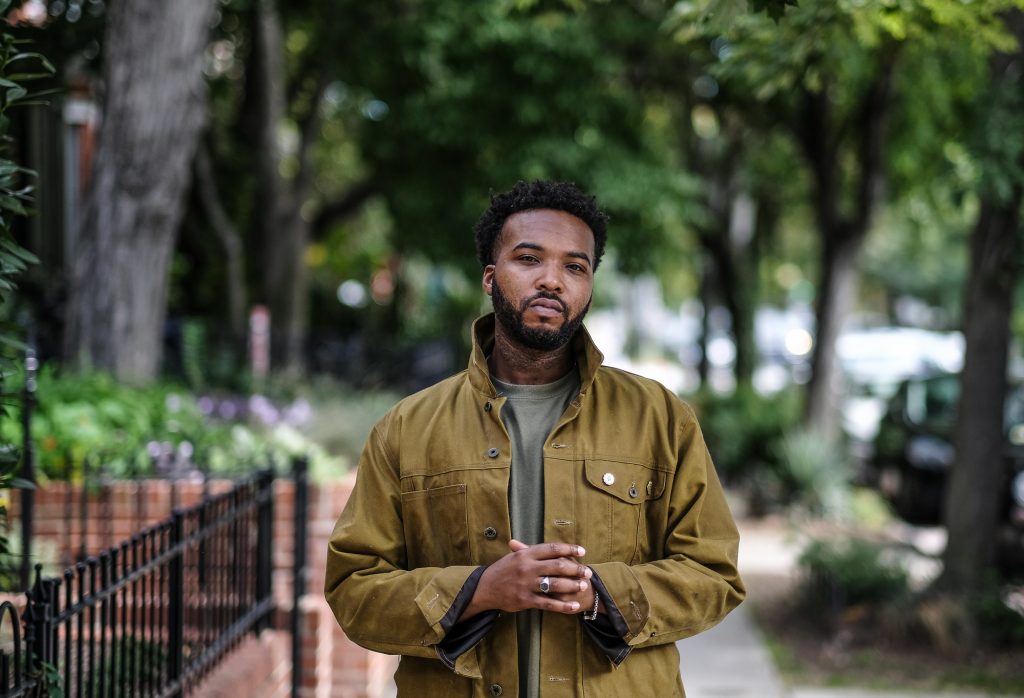 Hallelujah! It’s Thursday. As always, City Lights is here with the best events—hand picked by our staff!—happening in D.C. over the next week.

A central paradox fueled the thinking behind artist Leslie Rose’s most recent collection of woodblock prints, aptly entitled Iron & Steel. Created over the last two years, Rose supposes it was the assured solidity and tangibility of steel during such an “ephemeral” period that attracted her to the objects in question. The resulting collection is both a vibrant celebration of what she calls a kind of “domestic peace” so synonymous with sturdy ironworks and industrial innovation, combined with a sobered seriousness. In the past few months in particular, as Russian forces under the direction of Vladimir Putin have destroyed and rampaged Ukraine—its land and its peoples—the symbolism and stillness Rose captures in her prints have retained a curious poignancy. Especially as Russian forces concentrated its bombardment on the Ukrainian Azovstal Steel Factory in Mariupol, the complex, before an emblem of Ukrainian freedom and nationalistic pride, now became a global focal point for Ukrainian heroism and the fragility—and steeliness—of democracy. The collection at Washington Printmakers Gallery, on view online and in person (and via specially curated Facetime appointments!) until June 26, features a lattice of structures (electric towers, bridges, escalators) rendered softer and almost disguised in baths of lime, sky, and chestnut. One piece in particular, “Balconies,” encapsulates Rose’s talent for juxtaposition; gently repetitive cobalt shapes reminiscent of a skyscraper’s windows and fire escapes seem to glow in amber’s backlight, evoking the inescapability of capitalism coupled with a kind of peaceful, quiet domesticity. Despite the subject matter, all of Rose’s prints emanate a certain softness. Thanks to the delicate printing process, the introduction of natural elements—color and wood—blur the hard lines etched into the original—and how fittingly—metal. Iron & Steel‘s opening reception starts at 5 p.m. on June 18 at the Washington Printmakers Gallery, 1641 Wisconsin Ave. NW. The exhibition is on display through June 26 in person and online at washingtonprintmakers.com. Free. —Emma Francois

Sunday: Moechella at 14th and U streets NW

Though long celebrated, Juneteenth was finally deemed a national holiday by Congress in June 2021. Since then, however, the anniversary commemorating the day enslaved Texans learned that slavery had been abolished—two years after the 1863 Emancipation Proclamation—has become a bit commercialized. Pharrell Williams’ Something in the Water festival, taking place June 17–19 near the National Mall with ticket prices averaging more than $300, in particular, has received some flack for falling on the holiday but making it inaccessible to residents, many of them Black and Brown people, who can’t afford the steep entry fee. Long Live GoGo founder, activist, and rapper Justin “Yaddiya” Johnson prefers to stay true to a more community-based model as means to recognize the day. On Juneteenth, aka June 19, Yaddiya hosts another iteration of Moechella, a free, go-go band-led event full of Black cultural spirit and anti-gentrification passion at 14th and U streets NW, just as he’s done since 2019. The festival’s name blends D.C. slang for friend— “moe”—with the seminal Southern California music fest, Coachella. Yaddiya, who led a handful of anti-Trump protests in front of the White House as well as elsewhere with go-go bands on flatbed trucks, tells City Paper, “We’re doing something for the people that’s inclusive. I don’t really feel like it’s a Juneteenth event if you’re charging a lot for it.” This Moechella will include Critical Condition Band, whose single “Phatty” with its perky melody and catchy rhythm, received local R&B radio airplay in 2007 and TikTok attention in 2020. They’ll be joined by New Impressionz, who utilize chanted vocals overtop nervous energy bounce beats and gritty, psychedelic funk. TOB, another local band that employs pounding keyboard and drum grooves with the occasional and tuneful R&B touches, also joins the lineup. The event’s full roster includes rapper Big Nintendo, Adobo DMV’s Pedro Night, and guest speakers. Yaddiya, who will be releasing a new rap EP shortly, will host. The festive crowd can be expected to dance, sing along, and engage in call and response chants without having to show a pricey ticket. Moechella runs from 4 to 8 p.m. in front of the Reeves Center at 14th and U streets NW. instagram.com/yaddiya. Free. —Steve Kiviat

Ask singer-songwriter Pascuala Ilabaca anything, from how she identifies to what genre she considers her and her band, Fauna, and she’ll sidestep the path from Point A to B, resisting simple answers. The former question elicits an exploration into the problem of Chilean nationalism, a childhood enjoying folkloric festivals in the Andean mountains, her collaborations with Aboriginal women, and the false binary of cultural appropriation and appreciation. (She laughs over the idea of jeans being more her legacy to wear than an embroidered top simply because she’s a light-skinned woman, albeit one with Andean ancestry.) The latter summons the specters of Chilean legends like La Nueva Canción folk musician-activist Violeta Parra; Victor Jara, a folk singer and icon of resistance before and after his death during the military coup of Salvador Allende; and Los Prisioneros, the political pop band that popped up after the bloody Augusto Pinochet regime. Other musical influences are closer to home. Her family of visual artists has lived in Guatemala, Mexico, and India, where she returns for lifelong learning of classical North Indian music. In Chile, the family lived in tents for a one-year investigation into nomadic and circus communities. From her hometown, the major port city of Valparaíso, a seedbed of exposure to traditional and pop culture, Ilabaca connected with the languages of Latin America and forged an appreciation of diversity to complement her classic musical training. Her side steps to City Paper’s questions into nuance are not unlike the andina movements she and native Andean women portray in the music video of her new single, “Por que se fue la paloma.” The song, with Spanish-language lyrics that roughly translate to “Why did the dove leave? Since you call me a dove, can’t you see my wings?” is a clapback to misogyny, to the traditional love songs of men who howl about the woman who breaks a man’s heart and flies away like a dove. “When the sensation of vulnerability makes you uncomfortable and makes you move to transform it, it ceases to be a vulnerability and becomes more of a strength,” she says in Spanish, referring to the current social and political movements in Chile and themes in her women- and migrant-centered songs like “El Baile del Kkoyaruna.” She invites anyone attending her upcoming live show at Bossa Bistro on June 19 to prepare “to dance and come as they are, … because this is precisely about not keeping ourselves boxed into the norms of what folklore is but to experience culture, diversity, and unearth a lot about what happens in Chile and Latin America in this moment.” Pascuala Ilabaca performs at 7:30 p.m. on June 19 at Bossa Bistro & Lounge, 2463 18th St. NW. bossadc.com. $18–$20. —Ambar Castillo

Millennials and Centennials currently looking to Harry Styles as their pop music north star would benefit immensely from watching the music documentary George Michael Freedom Uncut, playing at AFI Silver on June 22. Launching his solo career with the Number 1 single “Careless Whisper” while still a part of the pop duo Wham! (who presciently named their second album Make It Big), Michael entered the Prince, Madonna, and Michael Jackson stratospheric level of fame with the release of his first—self-produced—solo album Faith in 1987. (It went on to win Album of the Year at the Grammys that year). Michael’s exceptional vocal abilities allowed him to duet with artists including Aretha Franklin and Luciano Pavarotti—and do more than just keep up. But it was Michael’s uncanny ability to write distinct pop melodies—the saxophone riff alone from “Careless Whisper” holds its own place in pop music annals—that gave him credibility as an artist. Eventually, as tends to happen in the music industry, the artist’s vision and the business collide. Michael famously refused to have his image used on his follow-up album Listen Without Prejudice Vol. 1, much to the dismay of his record label. Lawsuits and an arrest for “engaging in a lewd act” in a public restroom followed, forcing Michael out of the closet in 1998. But thankfully for us, Michael found a reflective mood later in life and was working on this documentary before his untimely death of heart disease in 2016 at the age of 53. While Michael was robbed of the opportunity to be the Chairman of Pop in the style of Styles, it gives the rest a view of the original blueprint. George Michael Freedom Uncut plays June 22 at 7 p.m. at AFI Silver, 8633 Colesville Rd., Silver Spring. afi.com/silver. $13–$15. —Christina Smart

Vertiginous Matter, Arlington-based photographer Jason Horowitz’s American University Museum retrospective, opens with monumental, hyperreal close-ups of cuts of beef, their muscle and fat glistening. Yet somehow, these oversized works don’t overshadow the others. In one series, Horowitz uses a smartphone app to create an immersive, space-bending panorama of humble street scenes, usually dominated by vegetation; in one, the yellow, dying flora looks, from a distance, like a Dantean view of hell. In another project, Horowitz layers multiple Instagram images of famous tourist sites on top of each other, creating a shimmering, ethereal portrayal that works especially well with the radial spokes and wires of the Brooklyn Bridge and Coney Island’s Wonder Wheel. (Horowitz’s images echo Corinne Vionnet’s work from a decade earlier.) Perhaps most striking are Horowitz’s depictions of junk foods submerged in gelatin, with eerie lighting (though not religious significance) suggestive of Andres Serrano’s controversial 1987 photograph “Piss Christ.” Another exhibit, Home-Land: Exploring the American Myth, includes works by eight D.C.-area artists that both “honor and confront the American dream.” Notable pieces include Helen Zughaib’s Syrian riff on Jacob Lawrence’s Migration series; Ric Garcia’s pop-art portrayals of Latin American consumer products; F. Lennox Campello’s Cuban-themed charcoal drawings with tiny, embedded videos; and Khánh H. Lê’s portrayal of vanished storefronts in Clarendon’s Little Saigon—what Ed Ruscha’s “Every Building on the Sunset Strip” might look like if it were in 3-D and enhanced by audio recordings of interviews. Also notable: The Bridge that Carried Us Over is a grim documenting of a small, local Black community’s struggle with slavery and racism, located just two miles north of the museum. Additional exhibits include paintings by Mokha Laget and Josef Achrer, as well as works by a variety of Caribbean American artists. All exhibits are on view through Aug. 7 at the American University Museum, 4400 Massachusetts Ave., NW. Open Friday through Sunday, 11 a.m. to 4 p.m. american.edu. Free. —Louis Jacobson