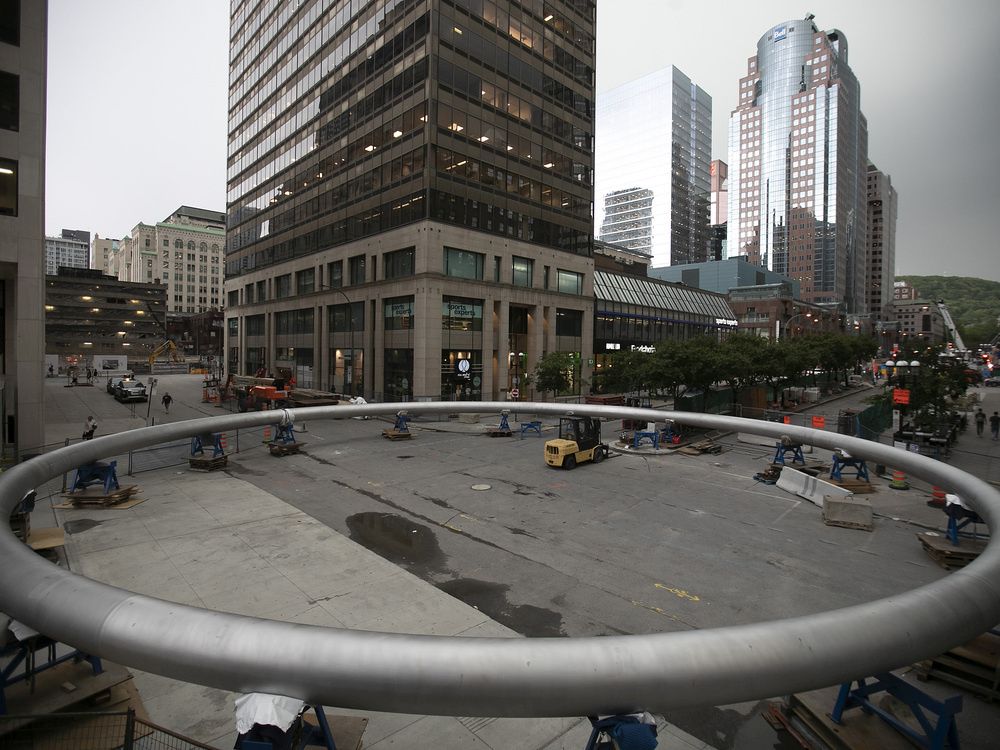 Yes, my precious. The Ring is in Montreal, lying on the pavement at the bottom of McGill College Ave. at the corner of Cathcart St. But it might be a little heavy, and big, to slip onto your finger.

The 23-tonne structure, which is 30 metres in diameter, will be raised into the air in September, suspended between two buildings at the top of the stairs of the main entrance to the Place Ville Marie esplanade. It will be then be lit up to mark the 60th anniversary of the iconic office complex and shopping mall.

The architectural installation has garnered lots of talk since it was announced in late April. A project by the real-estate firm Ivanhoé Cambridge, which owns Place Ville Marie, The Ring was designed by Claude Cormier + Associés, a landscape architecture firm whose projects include 18 Shades of Gay, a network of coloured balls strung along Ste-Catherine St. through the city’s Gay Village.

“The Ring is the union bringing together different moments of history in this (McGill College) corridor,” Cormier told the Montreal Gazette Wednesday afternoon, standing in front of his creation under looming storm clouds.

“Knowing that McGill University is at the other end, with its (Roddick) Gates, founded in 1821; the Mountain in the back, by (Frederick) Olmsted, (designed in) 1874; the (former) Royal Victoria Hospital, (built in) 1893; the corridor McGill College Ave., (opened in) 1980; Place Ville Marie, (built in) 1962; and the new REM coming into the station right below us — this is … the final destination of the whole REM.

“With the construction of the new streetscape on Ste-Catherine St., and Place Oscar Peterson in the making. The ring will be floating above all this, (and) frames it as one.”

Speaking to invited guests inside Place Ville Marie moments before, he spoke of The Ring as representing a marriage or union of past, present and future “of all that defines downtown Montreal.”

A stainless steel structure hovering amid Place Ville Marie’s edifices made of sandstone, glass and granite, The Ring has its own material integrity, according to Cormier, who wanted the structure to be “autonomous” and “self-supporting” — it is anchored by a series of metal beams attached to the buildings on each side.

Cormier also wanted it to integrate with its surroundings and not become a spectacle, while being aware that it will be an attraction.

“I hope it transcends Montreal’s personality,” he said. “I hope it’s something unique, something distinctive, something that is not expected and creates surprise. I hope it’s going to become part of daily life for Montrealers, tourists and people who work nearby. … I think it will just create a magical moment in the city.”

The Ring was funded in part by investments from Tourism Montreal, the city of Montreal and the Chamber of Commerce, among others.

Plateau Mont-Royal Mayor Luc Rabouin, who is the executive committee member responsible for economic and commercial development, knowledge, innovation and design, says The Ring adds to “all that makes downtown exceptional and alive again” after two years of the COVID-19 pandemic.

“It has a singular elegance, character and stature that will distinguish it in the future. It will capture the imagination … as a strong sign of the dynamism of downtown,” he said. “I’m convinced its presence will attract people from all over and vitalize the heart of the city. For Montreal, public art is essential to our quality of life.”

Though Cormier is a landscape architect by trade, he, too, feels The Ring could be seen as public art.