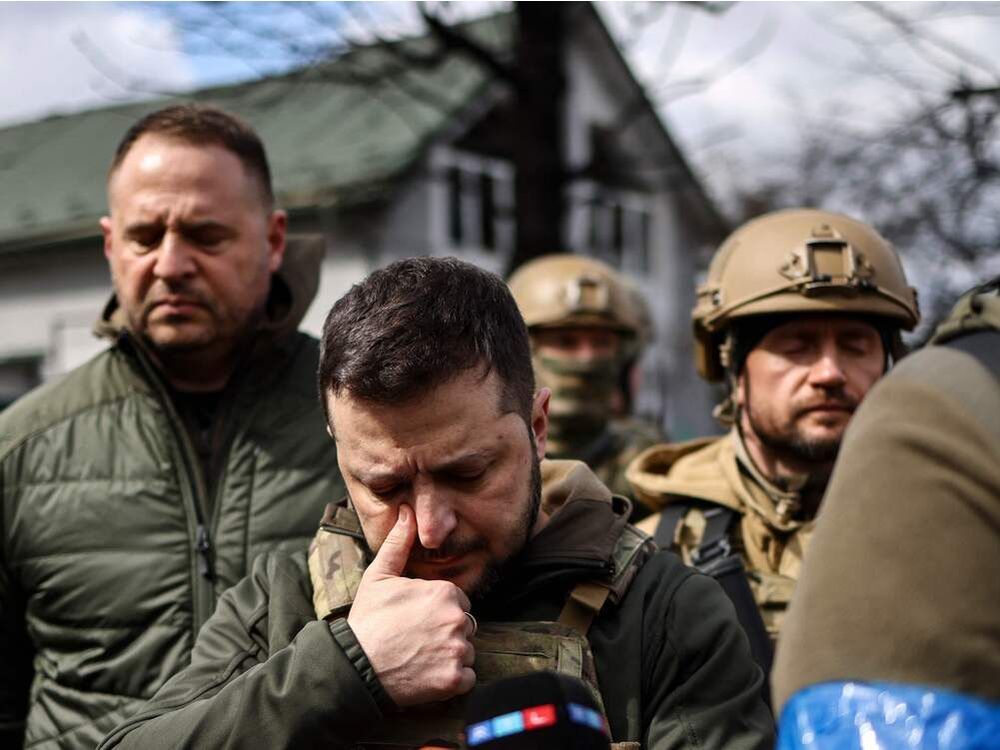 In the wake of growing evidence that Russian soldiers have been committing war crimes near Kyiv, Ukrainians in Montreal are calling for more support for Ukraine and harsher sanctions against Russia.

Images and videos from the suburb of Bucha following the recent retreat of Russian soldiers have revealed dozens of civilian corpses in the streets, prompting outrage, horror and strong condemnation from around the world.

“This is not how you wage war, according to the rules of war,” said Gregory Bedik, president of the St-Volodymyr Cultural Association of Montreal and a Ukrainian Canadian Congress delegate. “People that are bound with their arms to their back and a bullet to their head — that’s not fighting. That’s getting rid of a person that’s not fighting back.”

A New York Times report published Sunday details Russian troops shooting civilians upon their arrival in the Kyiv suburb shortly after the war began at the end of February. A coroner described collecting civilian bodies with gunshot wounds and laying them to rest in a mass grave.

Simon Kouklewsky, parish council president at the Saint Sophie Ukrainian Orthodox Cathedral in Montreal’s Rosemont neighbourhood and the producer of the Ukrainian Time radio show on CFMB AM 1280, said that while the West’s help for Ukraine so far has been appreciated, more needs to be done to push back against the Russian regime.

Reiterating his support for Ukraine on Twitter on Sunday, Prime Minister Justin Trudeau said Canada will hold the Russian regime accountable, and that “those responsible for these egregious and appalling attacks will be brought to justice.”

“We have to gather the information, we have to continue to provide Ukraine with the weapons they need to continue the fight, and we have to get all the details so this can have a war crime trial,” he said. “This guy is brutal, and what’s happening in Bucha is outrageous.”

Kyle Matthews, the executive director of the Montreal Institute for Genocide and Human Rights Studies, said on Monday it’s clear the only way to stop Russia will be through military force.

“Whether that’s the Ukrainians getting more assistance than they’ve been given, although Russia’s turned around and said they would nuke a country if they did that,” he said. “Which explains why there hasn’t been a strong reaction, but the question now is what can be done. We need to do something now to protect civilians, and whether that is trying to get a (United Nations) peacekeeping force, as far-fetched as that is, or getting certain states to get more involved, it’s a very tough one — but clearly with what we’re seeing there’s going to be outrage and demand to do more. Usually governments try to hide these images from people because they don’t want them getting out, and they know they can be a powerful force in the public’s wanting of stronger action.”

Both Kouklewsky and Matthews are encouraging Montrealers to contact their members of Parliament to make it clear they want Canada to do more.

“If we can’t insist on a no-fly zone to NATO, then at least either send money to buy weapons or send weapons,” Kouklewsky said. “More sanctions — whatever we can do.”

Until the war ends, the Montreal branch of the Ukrainian Canadian Congress will hold weekly protests downtown as it has for the past few Saturdays. Bedik said on Monday the latest development in the war will see the narrative at the protests shift to put more emphasis on the people of Russia, in hopes that they’ll overturn their government.

“We’re not just going to be talking about Putin,” Bedik said. “Because Putin, yeah, he’s the devil reincarnated, but he’s not flying all the planes, he’s not raping all the women, he’s not throwing all the bombs, and he’s not shooting people in the back of the head. There are people doing that, and they’re Russians.”