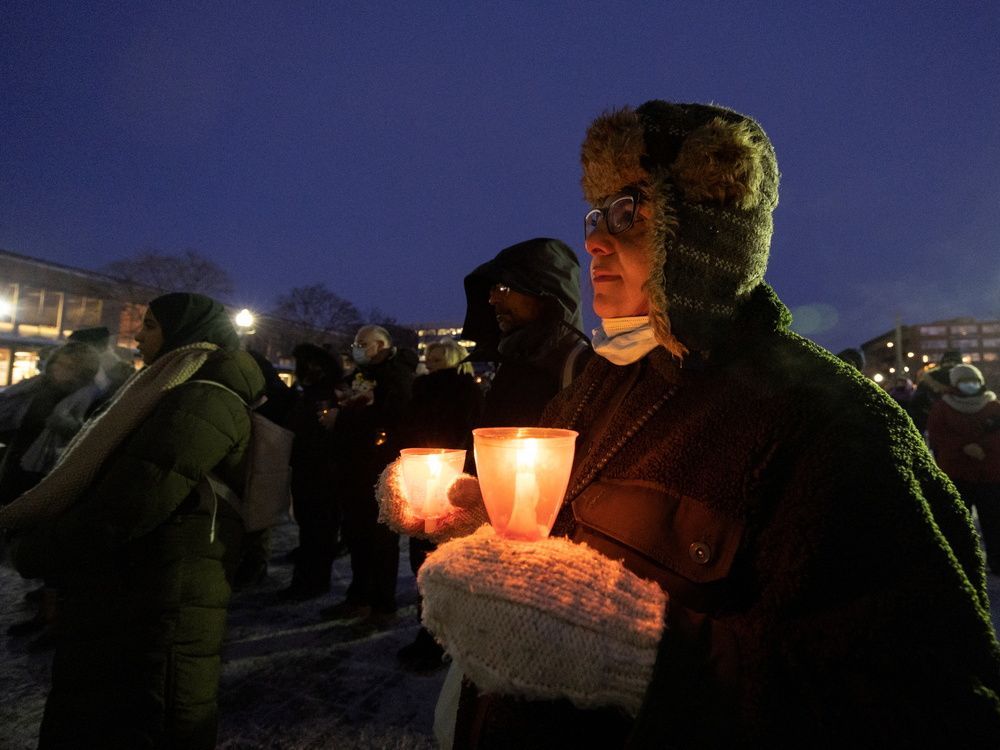 More than 150 Montrealers of all faiths gathered in the frigid cold on Saturday evening in Parc Extension to mark the fifth anniversary of a shooting rampage at a Quebec City mosque that claimed the lives of six people and injured 19 others — a tragedy that led to a reckoning across Canada about Islamophobia.

One of those who turned up was Katherine Macnaughton-Osler, who travelled from Verdun by bus and métro to the public square across the street from the Centre Culturel Islamique du Québec.

“I’m just here to say I’m in solidarity,” said Macnaughton-Osler, holding a lit votive candle in her hands in memory of those slain.

“I’m not Muslim myself, but it’s important to take a stand against Islamophobia and all forms of hatred and racism of any kind. It’s the least that I can do.”

On the night of Jan. 29, 2017, a gunman entered the Islamic Cultural Centre in Ste-Foy and opened fire. Worshipers Mamadou Tanou Barry, Azzeddine Soufiane, Abdelkrim Hassane, Ibrahima Barry, Aboubaker Thabti and Khaled Belkacemi were shot dead. Images of their faces on large posters were held up during Saturday’s gathering for all to see.

Ehab Lotayef, co-founder of Muslim Awareness Week, spoke to the crowd of the need to unify people of different faiths, races and creeds instead of sowing division.

“Working together is the only way for us to build a strong society,” he told those gathered. “One community cannot do it alone. We have to have the will to do it together.”

Lotayef also spoke out against Bill 21 , the Quebec law that prohibits teachers and civil servants from wearing religious symbols at work, including the hijab donned by Muslim women.

“It is important that for our society to flourish and to be peaceful, we need a strong charter of rights and to respect it — not to strike out items from it, like what happened by the Quebec government with Bill 21,” he said, alluding to the Legault government’s amendment of the charter to permit the legislation.

Premier François Legault was expected to attend a vigil outside the Ste-Foy mosque.

Sameer Zuberi, Liberal MP for Pierrefonds-Dollard riding, announced to the Montreal crowd the federal government will soon be appointing a special representative to combat Islamophobia and who will be given the necessary resources to do that job.

He also made a veiled criticism against Legault, who has refused to date to acknowledge the existence of systemic racism in Quebec.

“The federal government recognizes that systemic racism is real,” Zuberi said in French.

Alexandre Boulerice, NDP member of Parliament for Rosemont—La Petite-Patrie, was among many other political leaders to address the Montreal gathering.

Boulerice was also critical of the Legault government.

“Have we changed as a society, have we progressed in the past five years?” Boulerice asked. “I think we’re having a more open dialogue about Islamophobia and systemic racism. Has the Quebec government recognized this? Unfortunately, not yet.

“There is still much work to be done,” he added.