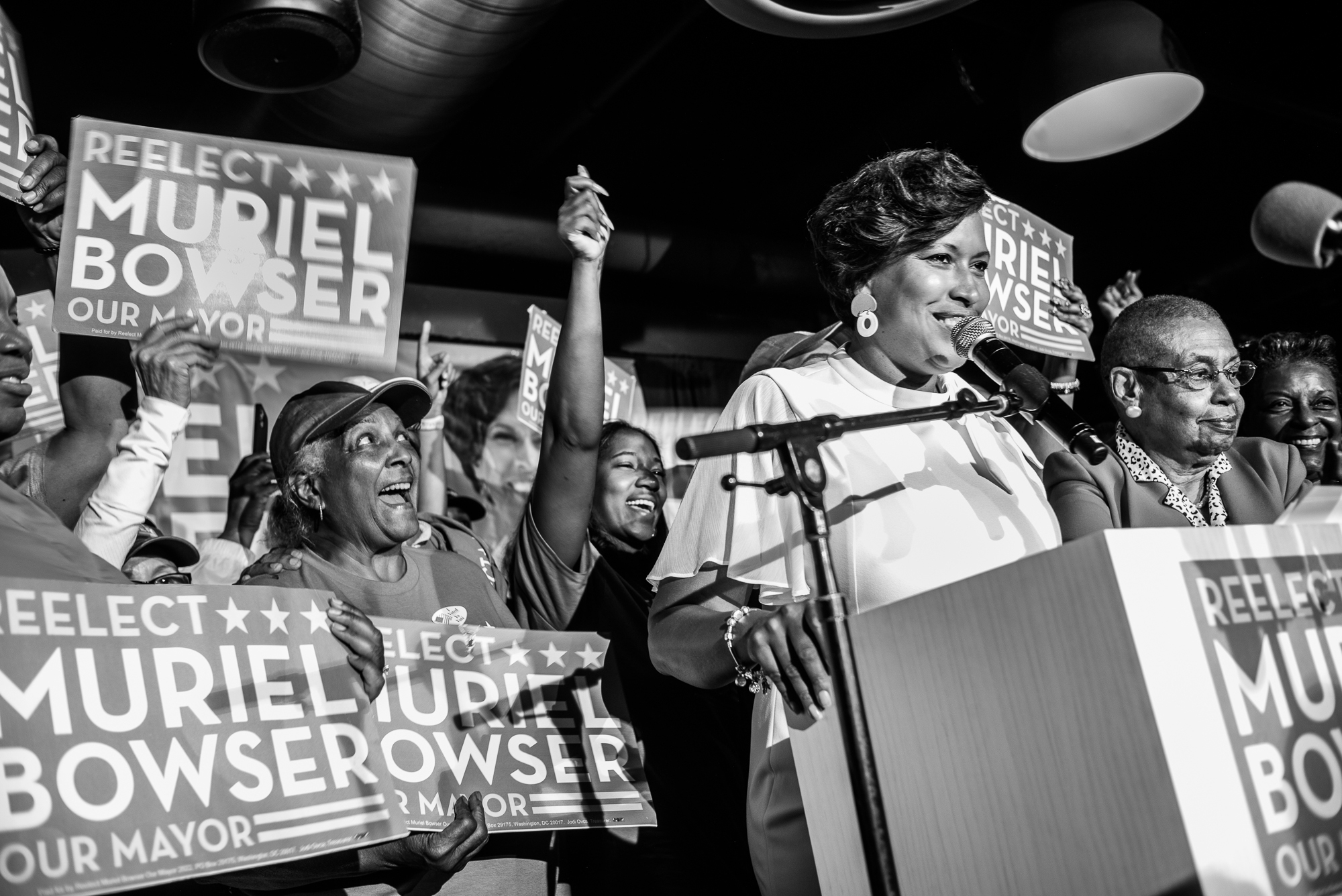 Much stayed exactly the same for D.C.’s political establishment after Tuesday’s primary. Yet the results also suggest that the ground is shifting beneath their feet. D.C. voters sent a mixed message that defies easy categorization. In the three citywide races featuring incumbents, the old hands cruised to victory without much drama: Council Chairman Phil Mendelson, At-Large Councilmember Anita Bonds, and, of course, Mayor Muriel Bowser. But the practical effects may well be felt in the ward races, where two lawmakers more inclined to uphold the status quo (Ward 3 Councilmember Mary Cheh and Ward 5 Councilmember Kenyan McDuffie) did not seek reelection and are set to be replaced with two progressive favorites in Matt Frumin and Zachary Parker, respectively.

Throw in Ward 1 Councilmember Brianne Nadeau’s win and it is hard to deny that the D.C. Council sworn in early next year will almost certainly be a lot less friendly to the sort of moderate policies championed by Bowser, Mendelson, and company.

The primary winners still have to win in November, and you can never count out an independent bid, but it’s a solid bet that progressives on the new-look Council will have more muscle than ever before, should they choose to use it. Bowser and Mendelson still hold many of the levers of power (and there are major differences even among the left-leaning members of the Council). Even so, moderates won’t have as many reliable votes as they do now.

“Change was delivered,” Parker said as he celebrated his sizable victory at Ivy City Smokehouse.

It made for a bit of a strange dichotomy at Bowser’s raucous election night celebration at Franklin Hall. On the one hand, the crowd was jubilant, glad to see so much remain the same in city government. Attendees didn’t even look much different than they did four years ago; Loose Lips spotted ex-lawmakers like Jack Evans and Brandon Todd and connected developers like Buwa Binitie, Bo Menkiti, and David Jannarone.

On the other, results were pouring in that could make it much more difficult for Bowser to enact her agenda. The lone sour notes of the night came as Bowser gamely congratulated Parker, Nadeau, and Ward 6 Councilmember Charles Allen (who ran unopposed) on their wins. The applause that was so abundant for Bonds and Mendelson dried up quick, and LL could even hear some boos among the well-lubricated crowd.

Nadeau, for her part, said voters “demonstrated today that they believe in more progressive values” around affordable housing, public safety, and other issues. The city might not have cast aside its top leadership, but there is plainly some desire for a different path.

“I think we may see ourselves with an even more progressive Council, and I’m excited about all we can get done,” Nadeau said during her own victory celebration at Smitty’s Bar in Park View.

Mendelson, naturally, isn’t quite so sure. He allows that there may be some “agitation about whether government is doing what folks want,” considering that his challenger this year, Erin Palmer, performed much better than his last progressive rival, Ed Lazere, did four years ago. But he chalks up the outright wins for progressives in the ward races to a lack of incumbents more than anything else.

“It wasn’t about the voters wanting to change,” Mendelson says. “Maybe they did, maybe they didn’t. They didn’t have a choice.”

He sees Nadeau’s race as the only one where “change was an issue,” and her success has him a bit pensive: “I think we have to think that one through a bit.” It is certainly a mixed result in some sense: Challengers Salah Czapary and Sabel Harris will likely finish with more combined votes than Nadeau, and seem to have split an anti-Nadeau vote. Her three opponents in 2018 narrowly managed the same, and it remains to be seen whether Czapary and Harris will improve on that total.

The Ward 3 race, too, wasn’t exactly a resounding victory for progressives. Frumin was up by about 900 votes over Eric Goulet late Tuesday night, so it’s possible that it really did require a last-minute push to consolidate behind Frumin to block Goulet (and the influence of outside money the pro-charter school Democrats for Education Reform poured in on his behalf). It also seems At-Large Councilmember Elissa Silverman’s intervention in the race—funding a poll that may well have showed Goulet winning if Tricia Duncan, Ben Bergmann, and others split the vote—was well timed.

Parker’s victory looks to be perhaps the biggest win for D.C.’s left, likely adding another candidate endorsed by Democratic Socialists to the Council in a race that was never really close. Most politicos figured Parker could win, but it would be a nail-biter over Vincent Orange, Faith Gibson Hubbard and Gordon-Andrew Fletcher. Instead, Parker’s race was among the first called all night.

“Hopefully, we can deliver more of a people-first agenda,” Parker says.

If these results are worrying for Bowser, she certainly didn’t show it Tuesday night. And why should she? She’s still never lost an election, and bragged in her victory speech that she stands “in the footsteps of Marion Barry,” as the only person since the mayor-for-life to approach three terms in the big chair.

It looks that At-Large Councilmember Robert White will finish about 11 points behind Bowser, maybe a smidge closer than pundits guessed in the race’s early days, but it’s hard to argue with McDuffie’s point. The difference may well be that she can’t govern like a three-term incumbent winning so decisively—popular mayors normally get their way on things like, say, a brand-new football stadium, but this new Council may not go along.

Mendelson will still set the agenda and lawmakers will probably still fold in the face of a good many of her proposals. But the next few years of battles between the legislative and executive branches could well make for some very interesting drama, at the very least.