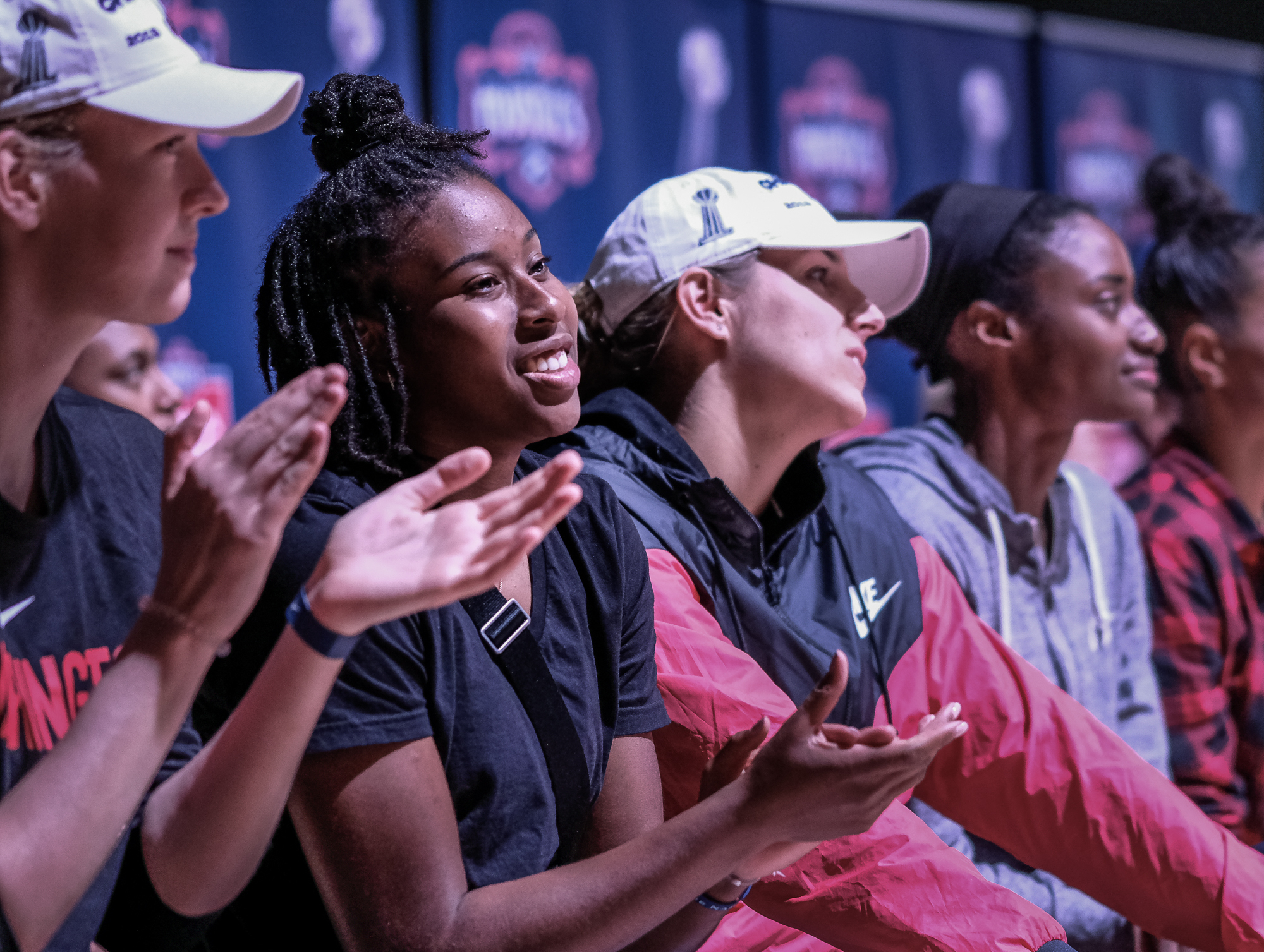 The disappointing end to the Washington Mystics’ 2021 season still weighs on Ariel Atkins. For the first time since she was drafted 2018, Atkins had failed to reach the playoffs. The Mystics finished the season 12-20, and afterward, head coach and general manager Mike Thibault called for a “reset” of the team’s culture.

But this year, Atkins believes, will be different.

“I’m gonna keep saying it, because that’s how I feel. [Not reaching the playoffs] is not OK,” she says. “It’s unacceptable.”

Atkins and the Mystics have reason for optimism ahead of their May 6 regular season opener. The team started training camp on Monday, and welcomed back key players like Elena Delle Donne, Alysha Clark, and Myisha Hines-Allen, all of whom missed significant time last season due to injuries. Earlier this month, the Mystics drafted 6-foot-5 center Shakira Austin with the No. 3 overall pick and 5-foot-11 guard Christyn Williams with the 14th pick. Both players pride themselves in their defensive abilities, and immediately add depth to a team already brimming with defensive talent.

“I’m super excited about the defensive side,” says Hines-Allen, a forward who has played in the center position at 6-foot-1. “I remember we were playing pickup on Saturday, and like the first play down, Shakira just like sent the shot. Not my shot now, not my shot, but she sent the shot and now it’s just like, ‘Yes. This is it.’ So I’m super excited to play with her and the other post players.”

“I think it just made a statement of like the energy I’m gonna bring,” Austin adds. “Everybody knew I was coming in as a shot blocker but for me to do that in front of everybody, they were pretty hyped.”

After two seasons of injuries and COVID-19 related illnesses that sidelined players and derailed the team’s goals, a palpable excitement about the 2022 Mystics hung in the air throughout the team’s practice and media day on Monday.

“Defensively, we are scary,” Delle Donne says. “It’s gonna be so much fun. When you have a team that can shut other teams down, that really has you go into a game with a different confidence. I don’t think we’ve ever had a team that has this much of a ceiling, or no ceiling, defensively, and then we can score the ball, too. I think people forget about that.”

In some ways, this year’s team reminds players of the 2019 championship roster. Six players from that team—Atkins, Delle Donne, Hines-Allen, Natasha Cloud, Tianna Hawkins, and Shatori Walker-Kimbrough—are still with the Mystics. And LaToya Sanders, another player on the championship team, is now an assistant coach.

“Our core group has been together for at least four or five years now,” Cloud says. “There was a lot of free agency movement and all that stuff, but we have our core here, we know each other in and out, we know our strengths and weaknesses.”

Thibault describes this group as “fun.” It helps that players like Delle Donne and Clark are back. Both players bonded over their rehab process—Delle Donne with her back, and Clark with her foot—and Thibault believes that missing the two not only in games but on the road hindered the team’s camaraderie and chemistry last season.

“It has a real air of great professionalism right now,” Thibault says. “You can sense it in talking to our players … There’s a kind of a quiet confidence about them that we’ve kind of recaptured some of that camaraderie that maybe goes away when you have all the injuries.”

The players speak with a confidence of a team expecting to compete for a championship. For Delle Donne, she wouldn’t have gone through the past two years if that wasn’t the case.

“I don’t just do this for the paycheck or do this for the heck of it,” she says. “Like I want to win. That’s really the only thing I care about at this point and obviously enjoying the time and journey with my team, but I really only care about the winning.”