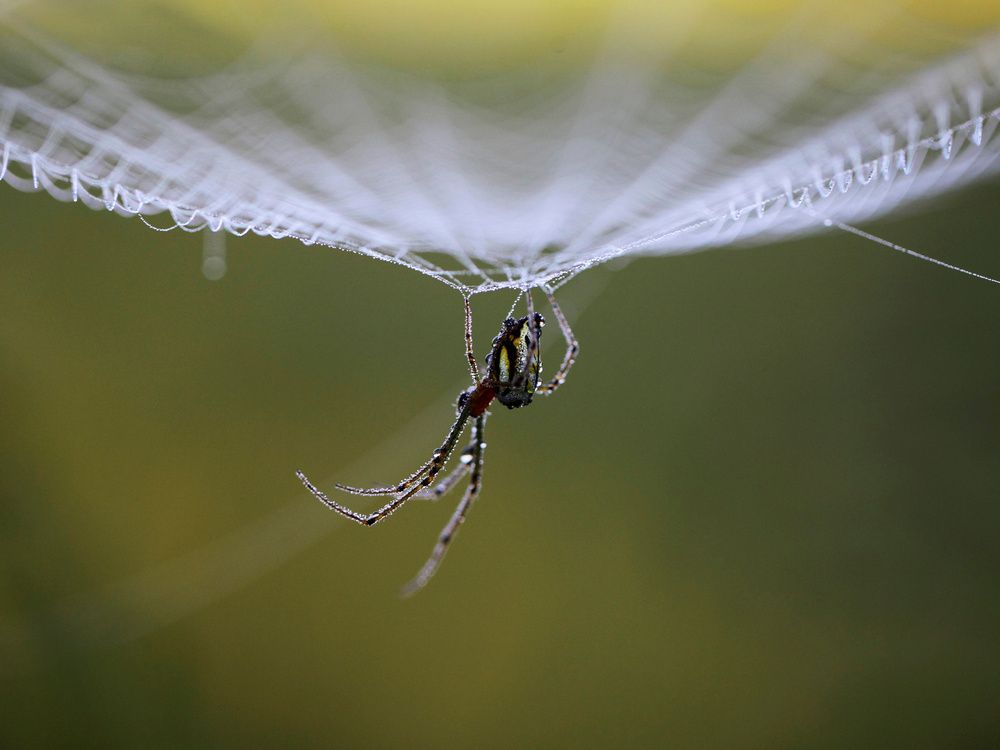 Summer is here, which means I’ve officially missed the boat on spring cleaning. This is unfortunate because two years of the COVID-19 pandemic have not been good for housekeeping. I tend to be a responsive cleaner — a pleasant-sounding term I just invented for people who only clean in response to nearly animate dust bunnies or the news that someone is coming over. With almost no visitors over two years, things at my place have gotten … interesting.

At least in my backyard, the No Mow May gardening initiative has been a godsend, providing an ethical explanation for the nearly foot-high field of clover. It’s not that we’re too lazy to push around a lawnmower. No. We’re choosing to help the bees! No Mow May has extended into No Mow June and might just carry on indefinitely: No Mo’ Mowing?

This negligent service to pollinators has an indoor counterpart at my place, where a similar tactic of benign neglect has allowed other creatures to flourish: house spiders.

I don’t like killing spiders because I’m squeamish. My husband doesn’t like killing spiders because he is soft-hearted. Consequently, unless a spider is intruding directly into a no-go area (kitchen counter, bed, etc.), the spider will be spared. After all, as we frequently remark, spiders eat other bugs! By letting a spider live, we’re ensuring the elimination of dozens of less desirable pests.

But spiders, unfortunately, come with spiderwebs — never a good look for anyone trying to project cleanliness. But if a spider has a right to live, does it not also have an attendant right to housing? Lately, it has been enough to give me pause, especially if that pause is on the way to the duster.

Recently, however, I was dismayed to encounter a huge web at the foot of the stairs. Instead of keeping themselves to out-of-the-way corners, the spiders — no doubt detecting our indulgence — were becoming far too bold. But as I approached with the vacuum, I spotted movement: a large centipede got caught in the web and a spider lunged forward and swiftly began wrapping it up, like Shelob with Frodo in Lord of the Rings or something in a nature documentary: Spider Versus Centipede.

Like spiders, centipedes live off other bugs and are sometimes called “nature’s exterminator.” Too bad they also look like nature’s nightmare. The people who say you should never kill them have obviously never encountered one running toward them at midnight with the unholy speed of a demon escaping the fires of hell. The fact that they live on other bugs is just something to tell yourself when you don’t manage to crush one before it escapes.

The centipede’s demise was horrific but fascinating. I put the vacuum away without turning it on. This spider was obviously a master hunter. It was doing great work! It was a valuable and contributing member of the family. Not to mention the educational aspect, when I could show my kid later.

But as we’ve started hosting the occasional friend indoors, the spider situation has become increasingly untenable. Creating educational opportunities out of housekeeping neglect does not make one’s dwelling conducive for guests. “Don’t mind the horrific spiderweb of doom at the bottom of the stairs,” I can imagine saying. “I’m just curious how many days it will take for the spider to liquefy the centipede.” I don’t think Emily Post has an entry on this.

Things truly came to a head the other day when my husband called me downstairs. There was a serious note in his voice that scared me.

“We have to look up this spider,” he said. “It bit me.” Brandishing his palm where there was a bright red swelling, he likened the sharp, spreading pain to a bee sting. “I’m worried it might be a brown recluse.” Brown recluse spiders have necrotic venom, and their bites can be (though rarely are) dangerous for humans.

The spider he’d instinctively killed was mostly intact, just slightly crumpled. It did look a lot like a brown recluse spider, though some Googling revealed that most sightings in Canada turn out to be false alarms. Further comparisons with online photos revealed it to be a yellow sac spider — a non-native species from California and Mexico that often ends up in Canada after hitchhiking north on grapes.

The spider might not have been a recluse, but maybe that’s what we’d become. In the absence of guests, we were probably getting a little too friendly with our eight-legged squatters. The bite helped me realize it’s time to break out the vacuum and the dusters, banish the spiders back into hiding, and welcome our actual friends back into the house.

Sign up for our new parenting newsletter at montrealgazette.com/newsletters.