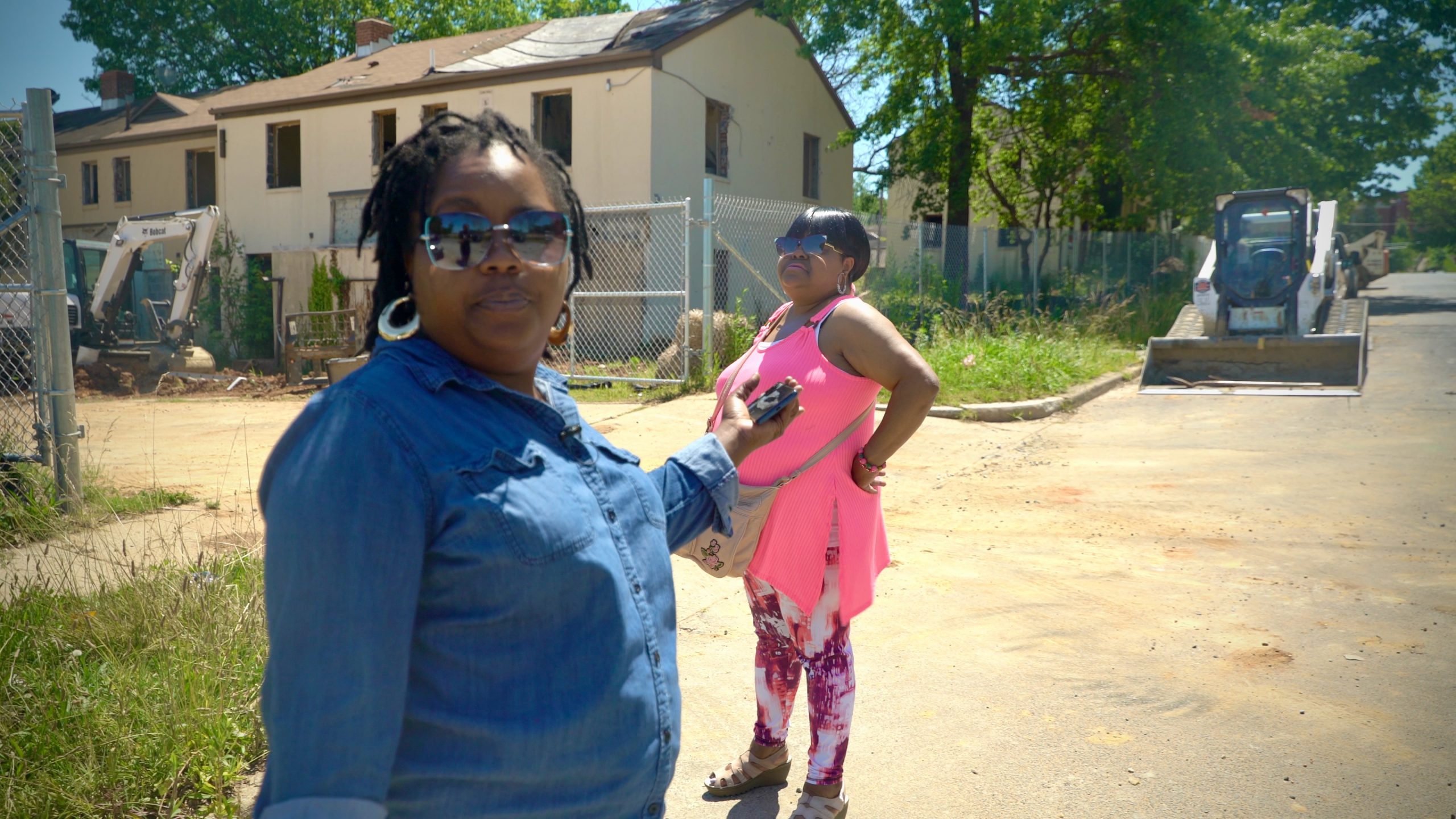 Samuel George and Sabiyha Prince didn’t know they were making a 50 minute documentary when they first conceptualized what would become Barry Farm: Community, Land & Justice in Washington, DC.

George, a filmmaker with Bertelsmann Foundation Documentary Films, met Prince when he interviewed the anthropologist, community organizer, and D.C. native for Go-Go City: Displacement and Protest in Washington, DC. For that doc, George also worked with local nonprofit Empower DC to interview residents of Barry Farm-Hillsdale, the historic Black neighborhood in Anacostia. When the film came together, there was some footage leftover from those interviews.

“When I mentioned that to Sabiyha, she said, ‘Why don’t we take that and make a little five, 10 minute film, add a couple interviews?’” George says. “And what started as this idea for this very limited, pretty short and pretty quick project, turned into a very in depth kind of project. I didn’t expect it to be like this. But looking back on it, I’m really, really happy we went in that direction.”

Like Go-Go City, Barry Farm runs for almost an hour. It tells the story of Barry Farm-Hillsdale chronologically—starting with its time as a plantation overseen by James Barry, who enslaved people to work the farm. Following emancipation, the federal Freedmen’s Bureau bought the land and sold—not gave, sold—it in plots to formerly enslaved people. Black families built homes and forged community in the neighborhood, which became a bustling center for Black life. That’s when, seeking to move away from slave owner Barry, residents renamed their neighborhood Hillsdale, though the name was never respected by the city.

In 1941, the government seized 34 acres of the land, where 23 families resided, to construct Barry Farm Dwellings, a public housing complex, after White residents protested building it east of the Anacostia River. In the next eight decades, the neighborhood became a home to working class Black families, a pivotal site for organizing during the Civil Rights Movement, and a backdrop for the emergence of go-go.

It’s said that history repeats itself, and that’s been the case for Barry Farm-Hillsdale. In 2019, Barry Farm Dwellings was demolished by the city to make room for new development. Displaced residents have no idea when or if they’ll be able to return to their neighborhood. Advocates with Empower DC and the Barry Farm Tenants and Allies Association successfully lobbied the city to preserve a small section of the housing complex and designate it as an historic landmark. That section is the only part of Barry Farm Dwellings that remains.

Barry Farm skillfully weaves through this dense history, nuancing the story of a neighborhood that, in more recent history, became unjustly synonymous with crime and danger in the eyes of some D.C. residents.

The story of Barry Farm-Hillsdale is one of relentless institutional racism and gentrification. Barry Farm does not shy away from that, but it’s also filled with moments of joy, which come from interviews with former neighborhood residents across generations. They smile as they tell stories of block parties, and paint a picture of a tight-knit community that looked after each other.

“That’s something I’ve observed being in the field as an anthropologist,” Prince says. “Hanging out in someone’s living room once, I’m talking to an elder, and a young person just comes in the door. Doesn’t even knock, just bounces in, and was like, ‘Hey, Miss so-and-so, I’m going to the store. Can I get you something?’ That kind of stuff is real. People going to the store. People taking each other to the doctor. People taking somebody to go pay a bill. Taking somebody to see their family members who may be locked up.”

The Bertelsmann Foundation makes non-profit documentaries, screening them at libraries and schools, and releasing them online for free. “There’s no hidden agenda,” George says. “We just want people to watch.”

George hopes the film reaches the throngs of people who have relocated to D.C. in the past 10 to 20 years, people like himself—George moved to the city in 2011.

“There’s this sense in Washington where, so many people are coming here that are new to the city, and so much looks like it was built yesterday,” he says. “It’s easy to look around it and to think that there’s no history here—that’s it all brand new. You know, fancy restaurants and donut shops. And what I saw the opportunity to do here is just to show in this one area, this intense and long history.”

Later in our interview, George corrects himself: Barry Farm doesn’t just tell the story of one neighborhood.

“It’s a small area, but within the story that we tell, you get a history of the city,” George says. “And arguably, there’s a lot of touchstones where you see the history of the country as well.”