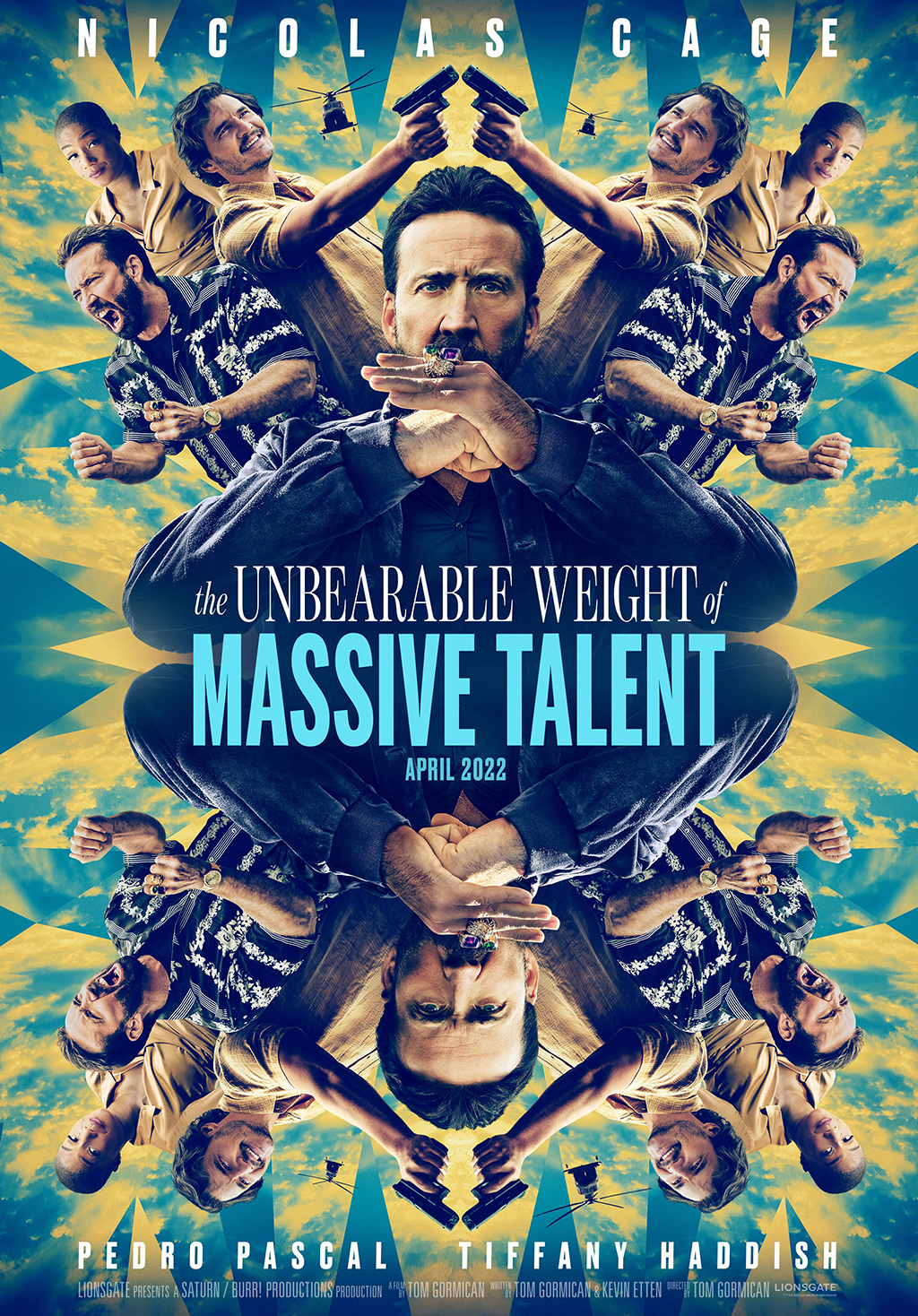 Nicolas Cage plays two versions of himself in The Unbearable Weight of Massive Talent, a self-aware action-comedy that rewards audience familiarity, or obsession, with the actor’s repertoire. One version of Cage is a figment of the other’s imagination, and to give you an idea of where the movie is going, at one point they make out with each other. Although director and co-writer Tom Gormican peppers the film with many references to Cage’s filmography, his movie is also broadly appealing because it keeps putting charming actors in increasingly bizarre, dangerous situations. Longtime Cage obsessives already know from Mandy and Pig that the actor is still at the top of his game, so perhaps Gormican’s target audience are those who remember Face/Off and The Rock most fondly. Either way, Cage’s mantra to himself is that he never really went away from the public eye, and this film exists to prove that.

When we catch up with Cage, he is circling the drain of his career. Nakedly desperate and anxious, he debases himself for any director who considers him for a part. His self-absorption is so complete he humiliates his fictional daughter Addy (Anna MacDonald) at her own birthday party, while his fictional ex-wife Olivia (Sharon Horgan) regards him with total disgust. Everyone seems to lose their patience with him, including “Nicky,” his younger CGI alter ego, a pure manifestation of Cage’s id. Nicky wears a Wild At Heart t-shirt and acts like the drifter from Red Rock West, a cruel, often hilarious reminder that the line between bravado and desperation can be razor thin.

Cage still has debts to pay, and with few acting opportunities, he accepts a $1 million check to appear at a fan’s birthday in Majorca, Spain. That fan is Javi (Pedro Pascal), an olive oil magnate who might be the world’s biggest Cage fan. The two strike up an easy friendship because no actor is immune to flattery, although there is a slight complication: A CIA agent named Vivian (Tiffany Haddish) believes Javi is an arms dealer who has taken a politician’s daughter as a hostage. Vivian convinces Cage to become the world’s most unlikely spy, a role he reluctantly accepts, then relishes with aplomb.

Like John Malkovich in Being John Malkovich, this role is an exaggeration of Cage’s public persona. Gormican is familiar with the countless memes of “Cage losing his shit,” and the screenplay, co-written with Kevin Etten, leans into his penchant for grandiose eccentricity. Javi may be a rich businessman who lives in an island villa, but he is an effective audience surrogate, someone who regards the actor with a mix of awe and intimidation. These dynamics prove to be fruitful as a basis for a buddy comedy, and the most rewarding scenes involve Cage losing the pretenses of celebrity. After Cage ignores Javi’s affection, the camera pushes in on Cage’s eyes at a crucial moment and we get a flash of the devilish confidence that made him a star in the first place. From there, we see a more relatable version of Cage, and not just because he is a confused man in a strange situation. An avowed film snob, in one memorable scene he finally stops obsessing over silent film and finds himself moved by an adored children’s classic (we’ve all been there).

Massive Talent shrewdly dovetails the plot with its self-awareness until they’re one in the same. To maintain his cover, Cage suggests working on a script with Javi. They talk about having a more conventionally entertaining third act … which is precisely what happens in the film. This kind of playfulness rewards audience pattern recognition, a gambit that could be tiresome, but ultimately succeeds thanks to an infectious sense of good cheer and competently-staged set pieces. Car chases make full use of the dramatic island setting, while shoot-outs are a nod to the action excess of Cage’s peak popularity (props from those films make brief cameo appearances). None of this is taken especially seriously, except perhaps for Cage’s self-awareness in the public imagination. His performance is halfway between parody and a therapy session, and there are brief suggestions he is—on some level or another—using this film to make sense of a complicated persona.

Massive Talent ends with the promise of a Nicolas Cage renaissance, maybe call it a Cage-issaance, for its semi-fictional hero. It is testament to this film that the same can be said for its real-life star, whose best years just may be ahead of him.

The Unbearable Weight of Massive Talent opens in theaters on April 22.