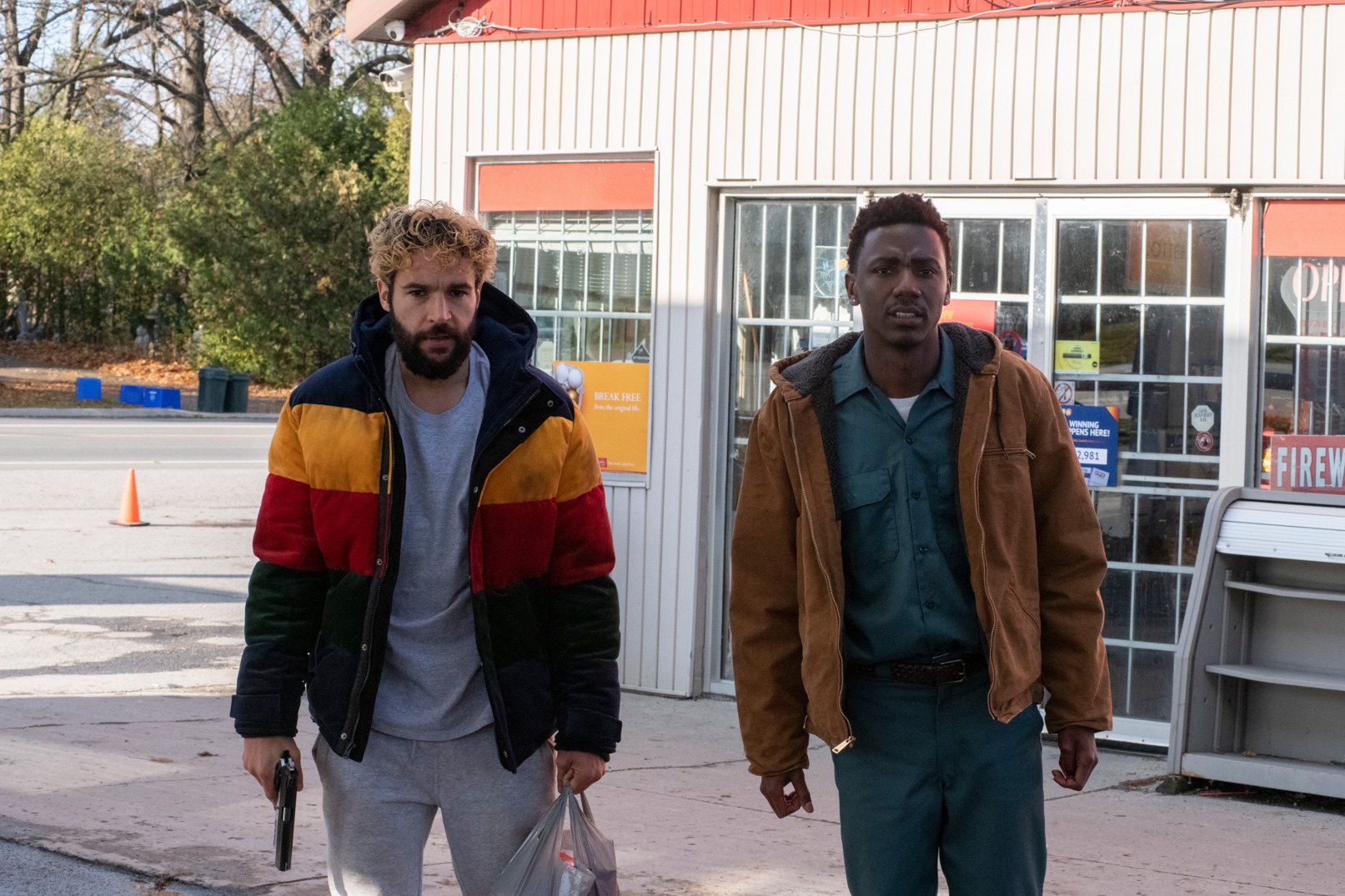 On the Count of Three features music from Papa Roach, but it does not endorse it. In the pitch-black comedy, the early aughts rock group is the favorite band of Kevin (Christopher Abbott), who is living his last day before he and his lifelong friend Val (Jerrod Carmichael) kill each other. With his dyed-blonde curls and soft machismo, Kevin appears to have designed his personality around nu-metal, so when he rocks out to “Last Resort,” which was censored by MTV and numerous radio stations when it premiered in 2000 for its explicit lyrics about suicide, it’s oddly affecting. “Last Resort” is a terrible song, but it gives him courage. Val isn’t having it.

“You can’t listen to music that exactly describes the emotional thing you’re going through,” he chides Kevin. “I’m not listening to Papa Roach on the day I’m going to kill myself.”

It’s a film about suicide and gun violence that comfortably rides the line between comedy and tragedy, as well as exploitation and exploration. In his directorial debut, Carmichael, a veteran stand-up comic, proves himself adept at juggling tones. As Kevin and Val move through their run-down American town, settling old scores and atoning for prior sins, they bicker like an old married couple. Intense moments of emotional pain are punctuated with cathartic punchlines. It’s the same trick Carmichael pulls off in his recent comedy special Rothaniel, in which he reveals personal and family secrets in an intimate setting, and each joke is sweet relief from the unbearable tension of a wound that can’t be healed.

On the Count of Three starts with a classic hook; the script by Ari Katcher and Ryan Welch opens with the characters facing off in a parking lot, guns pointed at each other in a voluntary standoff. But soon, the story devolves into a series of rushed vignettes intended to reveal character but that mostly seem like showcases for its admittedly stacked cast. Carmichael entices a trio of legendary comic actors to perform in basically one scene each: J.B. Smoove plays Val’s abusive ex-stepfather, Tiffany Haddish plays his beleaguered girlfriend; and Henry Winkler plays a child therapist who ruined Kevin’s life and is due for a major comeuppance. In their limited screen time, none of them get so much as a punchline, but their intrinsic comic energy brings intensity to each confrontation, and Carmichael’s filmmaking is nimble enough to step in and out of these heavy moments without ever losing his place.

Maybe it’s too nimble. At times, I wished On the Count of Three would slow down and invest a little more in its central characters. To make the most of its brief 83 minutes, the film defines them quickly in broad, oppositional strokes. Val is an implosive depressive burdened with childhood trauma that is carelessly skimmed over, and Carmichael proves unwilling to plumb its depths. His blank stare is meant to express surrender but it too often wanders into absenteeism, and the raw charisma he has in Rothaniel is barely glimpsed here.

Abbott, on the other hand, gives the performance of his career, playing Kevin as a live wire who swerves between anger and tragic-comic sadness to mask his vulnerability. Trapped in an extended state of adolescence by the trauma of his youth, he’s a cauldron of male insecurity and rage, portrayed by Abbott without fear of contradiction. In a key scene, he cowers during a confrontation with his childhood bully, only to take out his fury on an outdoor ashtray in the next scene. More than any written backstory, it is Abbott’s commitment to the moment and his willingness to look ridiculous that tell the story of his character.

In the end, however, Carmichael’s sensibility as a comedian hampers the film. Perhaps wary of the darkness he is inflicting on the audience, he moves things along too briskly, never building the sense of momentum it needs to make its tense, action-packed climax resonate. It’s a film about whether life is worth living, but Carmichael never takes the time to make us feel the dilemma. Except once: There’s a scene midway through in which Val and Kevin race dirt bikes on a muddy, empty track, just like they did as kids. It’s a lyrical interlude that has nothing to do with the plot, but its beauty reminds us of the joyful bond these two lost souls once shared and may never regain. Sometimes it’s the moments that seem unimportant that end up mattering the most.

On the Count of Three will be released in theaters and digitally on May 13.