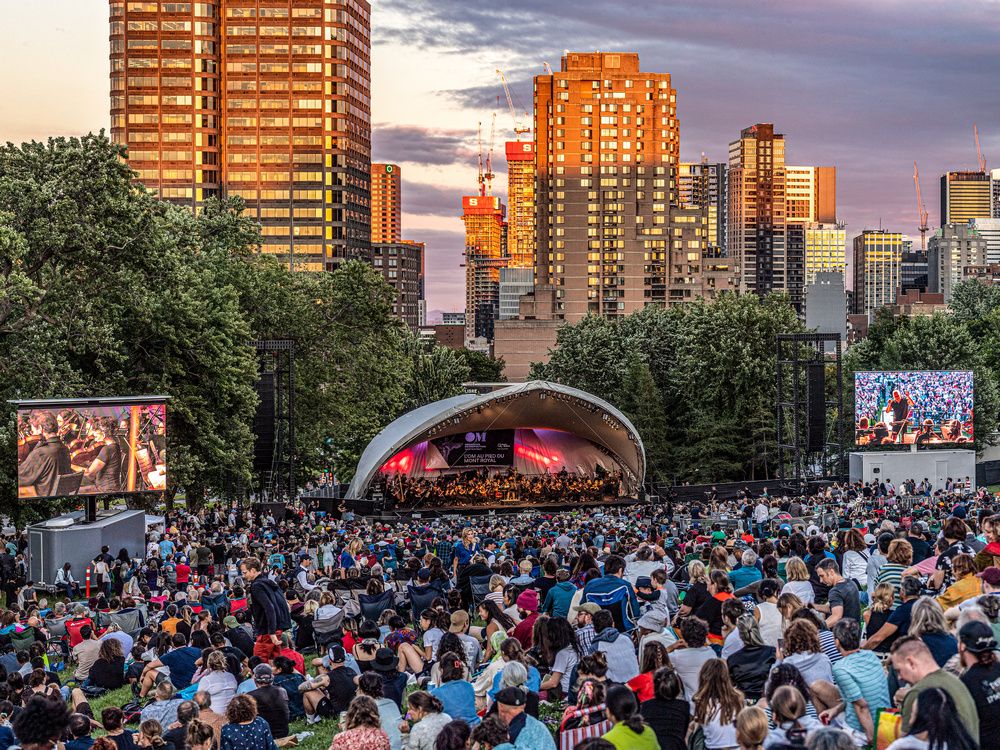 It’s not often the conductor of a major orchestra does his job on stage in shorts.

But that’s exactly what happened Tuesday evening when star Montreal conductor Yannick Nézet-Séguin and the Orchestre Métropolitain brought the music to the people at the foot of Mount Royal, and it was the perfect summer night to soak in the sounds of one of the city’s premiere orchestras.

Nézet-Séguin set the laidback tone for the concert early on, pulling out his phone to film a story for his Instagram account, shooting the orchestra and then the gigantic crowd that stretched from the stage just north of Pins Ave. right up to Rachel St. He also spoke at length about the various pieces his orchestra was performing.

By the time he got to the final selection, Beethoven’s Symphony No. 5, he quipped that “this one is written by Ludwig van Something.” He stopped just short of saying Roll Over Beethoven. By then darkness had fallen and you could hear a pin drop as people listened intently to one of the world’s most famous pieces of music.

Tuesday morning it was pouring rain, but by the time thousands began gathering on the grassy slopes just beside Mount Royal in the early evening, the sun was shining, the sky was bright blue and there was a cool breeze to keep everyone comfortable. And comfortable they were. Folks brought their own lawn chairs, picnic blankets, hampers stuffed with food and drink and some even brought some champagne flutes to properly enjoy their bubbly as they watched the orchestra in the park.

“Oh my god, it’s stunning,” said Myriah Haggard. “Beautiful music. Beautiful setting. We get to look at the sky and watch the sunset while they’re playing music for us. It’s lovely.”

“I haven’t seen them in a symphony hall and maybe this will kindle an interest in doing that,” said Selin Jessa.

“I’m here for the orchestra but also because it’s a beautiful day,” said Christian Mayer. “It’s a super nice evening and add the orchestra and you have a magnificent day.”

Mayer was also happy to be back out with a community of music lovers after two years of pandemic lockdowns and a scarcity of live music.

For Nézet-Séguin, playing these big free shows is central to the mission of the orchestra.

“We’re the orchestra of the city,” said Nézet-Séguin. “I mean we’re not the only orchestra but the Orchestre Métropolitain is really for Montrealers. So for us symbolically to be at the middle of the city, at the heart of the city, meeting a diverse group of people, some people who love music, some people who are just there because they’re curious. Young, old. Families. Children. I think it’s one of the moments where I feel our mission is the most crystallized. It’s really quintessential OM to go towards the audience and welcome them with open arms with a program that’s also really reflecting what we do in the main season. Well-known pieces, lesser-known pieces, discoveries. Two women composers, two male composers. To do it with tens of thousands of people, that’s fantastic.”

One of the highlights of the concerts was the Orchestre capping the soirée with an inspired rendition of Beethoven’s 5th Symphony, followed by a light-hearted disco romp through the same piece, in a nod to the late ’70s hit A Fifth of Beethoven by Walter Murphy.  Nézet-Séguin said with a hearty laugh that he’s only too happy to bring Beethoven to the club dance floor.

“I feel that disco music is so orchestral, it’s so symphonic,” he said. “A lot of musicians in the orchestra and myself, we often find ourselves feeling like ‘We wish we’d do some disco concerts every once in a while.’ I just feel this is a nod to maybe a certain generation who will know this Fifth of Beethoven.”

The orchestra rolled over Beethoven and told Montreal the news.