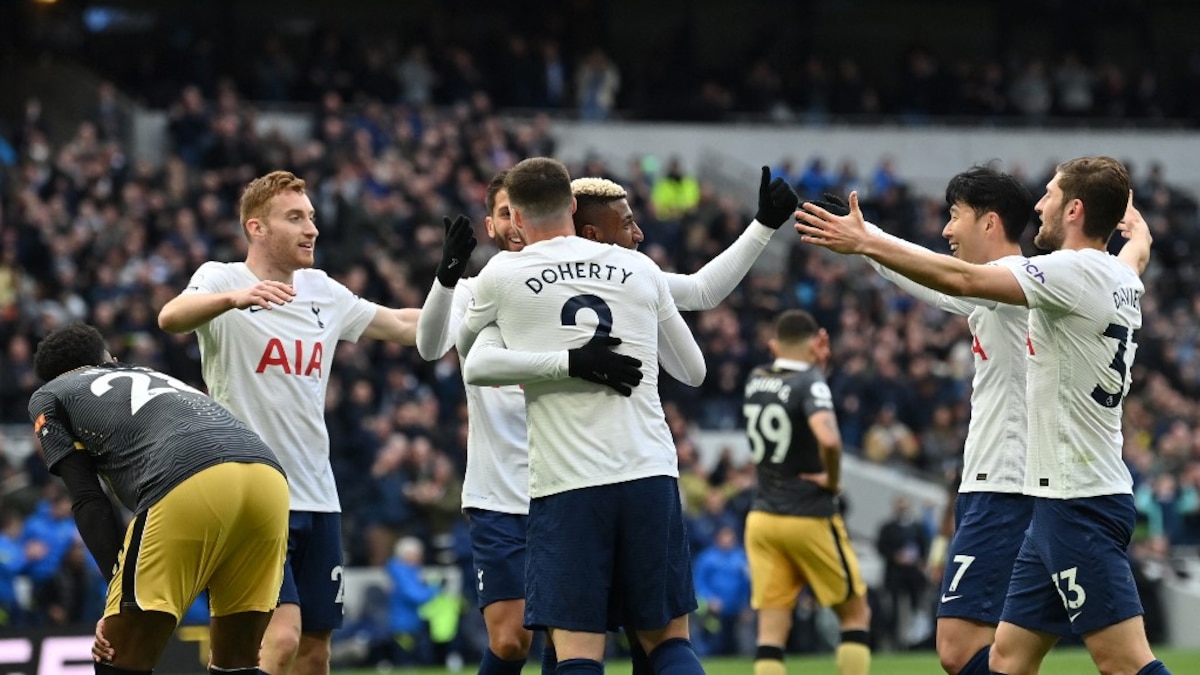 Tottenham powered into fourth place in the Premier League with a 5-1 rout of Newcastle, while West Ham’s 2-1 victory pushed Everton deeper into relegation trouble on Sunday. Antonio Conte’s side staged a stirring comeback to make it five wins from their last six league games. Newcastle struck first through Fabian Schar, but Ben Davies equalised before the break in north London. Matt Doherty, Son Heung-min, Emerson Royal and Steven Bergwijn netted after half-time as Tottenham climbed above bitter rivals Arsenal on goal difference. Arsenal, who have two games in hand on Tottenham, can regain fourth place if they avoid defeat at Crystal Palace on Monday.

Regardless of that result, Tottenham are firmly in the race to qualify for next season’s Champions League, despite Conte’s claim that it would be a miracle to finish in the top four.

“It’s very difficult to be in the race for the Champions League. We want to stay there until the end. We have to continue to play this way with intensity,” Conte said.

“I’m very happy. I was happy before the international break. I said it was a pity we had to stop. I asked my players today to start in the same way we left.

“We know we have eight final games. Arsenal has a good advantage but to play against us in this moment is not easy.”

Newcastle snatched the lead against the run of play in the 39th minute when Schar’s free-kick from the edge of the area caught Hugo Lloris unsighted as it evaded the Tottenham keeper’s weak attempted save.

But Tottenham were level four minutes later as Son’s teasing cross was glanced home by Davies from six yards for his first Premier League goal since 2017.

Harry Kane was the provider when Tottenham moved ahead in the 48th minute, the England captain whipping over a fine cross that Doherty stooped to head in from close range.

Needing another goal to overtake Arsenal, Conte’s men struck again six minutes later as Kane’s pass picked out Dejan Kulusevski and his cross was slotted in by Son for his 15th goal this season.

Emerson bagged his first Tottenham goal with a close-range finish from Doherty’s cross in the 63rd minute before Bergwijn came off the bench to drill home with seven minutes left.

In turmoil when Conte arrived in November to replace the sacked Nuno Espirito Santo, Tottenham have renewed hope of an uplifting end to the season.

At the London Stadium, David Moyes’ side moved up to sixth place thanks to Jarrod Bowen’s second-half winner on the forward’s return from a month out with a foot injury.

Aaron Cresswell had put West Ham ahead with a superb 32nd minute free-kick before Mason Holgate equalised with a deflected effort soon after the interval.

Everton were effectively out of the contest when Michael Keane was sent off midway through the second half.

Frank Lampard’s team have two games in hand on third-bottom Watford, but their proud record of playing in the top-flight every season since 1954-55 remains under serious threat.

They were more committed in their first outing since then, but there was no improvement in the worst away record in England’s four professional divisions this term.

A trip to second-bottom Burnley on Wednesday looms as a vital clash in Everton’s fight for survival.

“The reality is that we are in that kind of moment where everything is going against us, decisions, moments in games, red cards,” Lampard said.

“I can’t fault the players, their character. The performance was really positive and we have 10 games to perform like that again.”

Beaten in two of their previous three league matches, West Ham are just three points behind Tottenham and Arsenal.