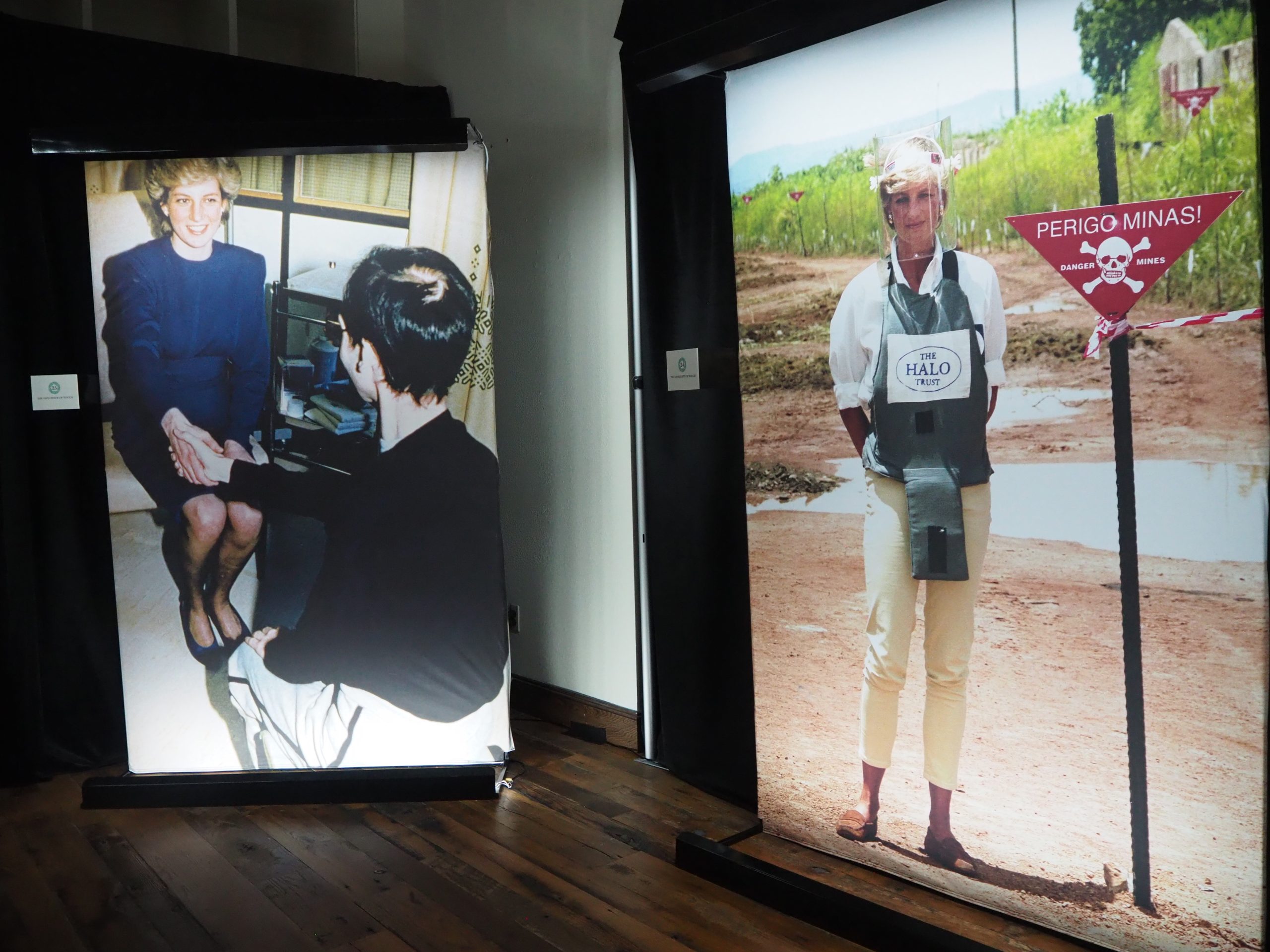 In a long-sleeved, navy dress, Princess Diana sits in a chair, looking as elegant as always. Her right arm is extended, shaking the hand of a young man. He’s been photographed from the back, so aside from the edge of his glasses and jaw, he’s anonymous.

That photo, taken by long-serving royal photographer Anwar Hussein, changed the world. That’s because the anonymous young man was Ivan Cohen, the only AIDS patient residing in the medical ward Diana visited who was willing to be photographed with her—and only from the back. The year was 1987, and ignorance and bigotry against people living with HIV/AIDS permeated the general public. The Princess of Wales publicly holding the hand of an AIDS patient was instrumental in changing public perception of the disease, according to Cohen himself.

The photo is on display alongside 144 other photographs in a new exhibit that opened at Tysons Corner Center on June 8. Princess Diana: Accredited Access Exhibit takes a look at Diana’s life as a royal, seen through the eyes of Hussein. His work—including never-before-seen photographs of the princess—is presented next to photos taken by his sons Samir and Zak, who both work as royal photographers today.

The exhibit, which visited Los Angeles and Chicago earlier this year, comes 25 years after Diana died in a car crash in Paris on Aug. 31, 1997, in what feels like an influx of Lady Di content—Sandi Rankaduwa called it a “Dianaissance” in an essay for BuzzFeed News. Diana was the subject of The Crown’s fourth season, and will reappear in its fifth, which is slated for a November release. Kristen Stewart portrayed her in last year’s fantastical psychological drama Spencer, and she even got the Broadway musical treatment, which was torn apart by critics. Exhibit curator Cliff Skelliter chalks this renewed interest up to Diana’s relatability, which earned her the unofficial title of the People’s Princess.

“She transcends time,” Skelliter says. “Even with time passing, I think she still, in our minds, holds this beautiful position of being somebody that was a very relatable person in a very unrelatable situation.”

The exhibit magnifies that unrelatable situation, literally. As you traverse the rooms, which are divided into different themes (Skelliter refers to them as “episodes,” and says his pandemic television binges inspired the exhibit’s design), an audio guide narrated by Samir and Zak accompanies you. Bite-sized anecdotes from the Hussein family contextualize every photo in the exhibit, many of which are blown up to 5-by-8-foot prints. The photos on display cover the iconic—Diana’s “revenge dress,” her famed solo shot at the Taj Mahal—as well as the lesser known. One of my favorites shows Diana darting across a grass field, shoeless, racing against other women in a “Mother’s Race” hosted by Prince Harry’s school. (She, of course, won.)

Princess Diana: Accredited Access Exhibit markets itself as the “world’s first-ever walk-through documentary,” due to its combination of episode-like themes, blown-up photos, and audio guides. But it’s really no different from the sort of historic photo exhibits that museums like the National Geographic Museum specialize in. It’s also been called immersive—CNN named it one of the best 12 immersive experiences around the world—though there are no projections or interactive activities that have become hallmarks of the genre. (In addition to the photographs, there are impressive paper sculptures by multimedia artist Pauline Loctin inspired by royal fashion.) It mimics the “immersive experience” tradition most in its gift shop, where you’re encouraged to take a photo for Instagram on a red carpet fixture, and to buy T-shirts, water bottles, candles, beanies, and compact mirrors—all branded with the exhibit’s crown logo.

The “walk-through documentary” branding is perhaps most off-base because of everything that’s not in the exhibit. The stories the Hussains tell focus on Diana’s public life, including her bold fashion choices and her humanitarian work. Everything less pleasant to talk about is absent from the show. Prince Charles is nearly invisible as a figure in Diana’s life, and his infamous infidelity is only mentioned once, during the audio on the revenge dress photo. Camilla Parker Bowles, the woman with whom Charles cheated and is now married to, is never mentioned by name. Diana’s incompatibilities with royal life are presented as part of a cheeky rebellious streak, rather than factors in her severe mental health struggles, which they were.

I ask Skelliter about this after touring the exhibit. He immediately started nodding. “L.A., Chicago, Toronto, all the press there—nobody has asked me this question. And I actually thought it was really interesting that nobody had asked this yet, because I think it’s a good question.”

It turns out we both voraciously listened to and learned about Diana via the popular history podcast You’re Wrong About.

“After listening to You’re Wrong About, you have no idea the internal struggle I had with not going in, like, 50 million directions,” Skelliter says. “But that’s out there. People can go listen to them … I think for Anwar to tell those stories, he’s not the right guy. We really wanted to stick to the things he experienced, and we tried our best to stay away from speculating too much.”

Fair enough. But there’s an aspect of Diana’s story, and the story of any royal in recent history, that would fit right into an exhibit about royal photography: the role that photography—paparazzi  in particular—has in the day-to-day life of a modern royal. The car crash that killed Diana occurred as she was escaping paparazzi. Skelliter put me in touch with Samir Hussein, who I was able to Zoom with while he was between shooting the Platinum Jubilee and the Royal Ascot. I asked him about the darker side of constant photography.

“You have to make a decision, if you’re going to be a serious royal photographer, or if you’re gonna do the paparazzi thing,” Hussein says. “I’ve never been interested in the paparazzi side of it, because I want to have a relationship with who I’m photographing … These are historical events, and these are pictures that will hopefully be seen for decades, if not into the next century.”

One photo of Samir’s, which is on display at the end of the exhibit, is a particularly good contender for having that sort of legacy. It’s a photo of Prince Harry and Meghan Markle, the Duchess of Sussex, gazing romantically at each other under an umbrella, raindrops illuminated all around them. Samir described the photo, which looks like a still from a movie, as “one in a million.” It graced covers of tabloids and magazines, and went viral online.

The pressure to snap that photo was on—it was one of Harry and Markle’s last public appearances as senior royals. About a month before, they’d announced they were stepping down from their senior roles. Among other things, they said they wanted “space” for their family.

The symmetry between Diana and the generation of royals that succeeded her is a guiding principle of Princess Diana: Accredited Access Exhibition, Skelliter says. In Harry and Markle’s highly anticipated interview with Oprah Winfrey—in which they spoke candidly about the lack of support, as well as the blatant racism, their family received from the monarchy—the prince drew that comparison, too.