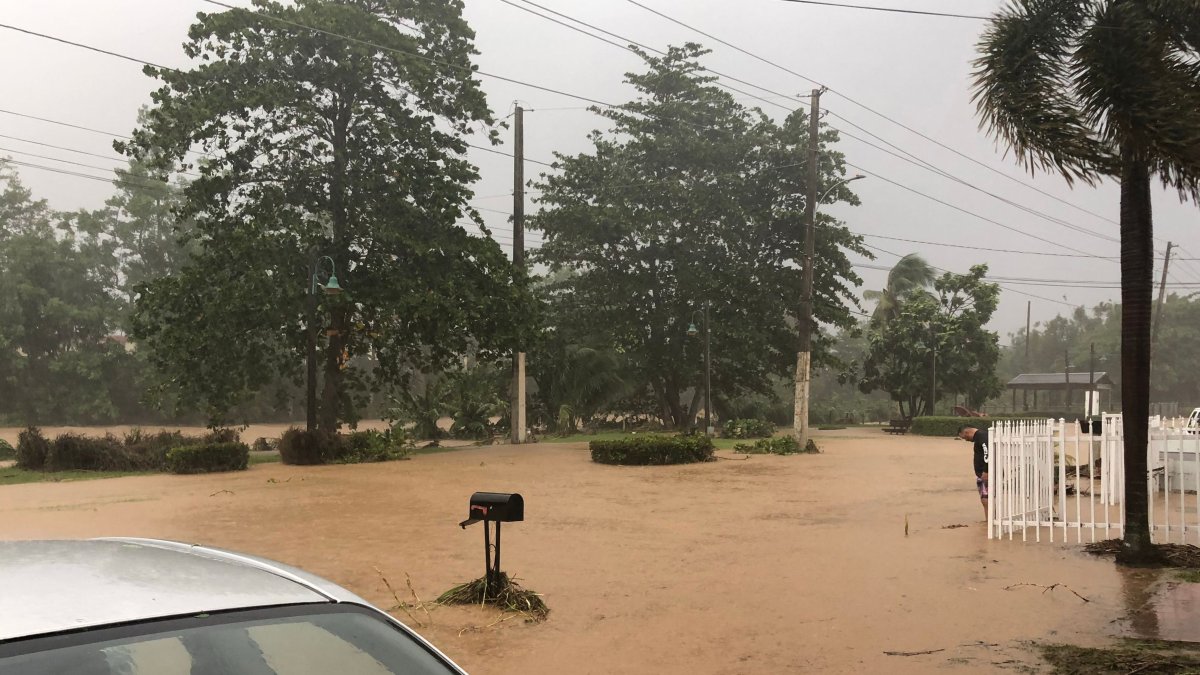 Hurricane Fiona bore down on the Dominican Republic Monday after knocking out the power grid and unleashing floods and landslides in Puerto Rico, where the governor said the damage was “catastrophic.”

No deaths have been reported, but authorities in the U.S. territory said it was too early to estimate the damage from a storm that was still forecast to unleash torrential rain across Puerto Rico on Monday.

Up to 30 inches was forecast for Puerto Rico’s eastern and southern regions.

“It’s important people understand that this is not over,” said Ernesto Morales, a meteorologist with the National Weather Service in San Juan.

He said flooding has reached “historic levels,” with authorities evacuating or rescuing hundreds of people across the island.

“The damages that we are seeing are catastrophic,” said Gov. Pedro Pierluisi.

Brown water rushed through streets, into homes and even consumed a runway airport in southern Puerto Rico.

Fiona also ripped up asphalt from roads and washed away a bridge in the central mountain town of Utuado that police say was installed by the National Guard after Hurricane Maria hit in 2017 as a Category 4 storm.

The storm also ripped off the roofs of several homes, including that of Nelson Cirino in the northern coastal town of Loiza.

“I was sleeping and saw when the corrugated metal flew off,” he said as he observed how the rain drenched his belonging.

Ada Vivian Román, a 21-year-old photography student, said the storm knocked down trees and fences in her hometown of Toa Alta.

A Hurricane Warning is in effect for Puerto Rico, including Vieques and Culebra and the eastern coast of the Dominican Republic from Cabo Caucedo to Cabo Francés Viejo

She said she is also worried about whether the public transportation she relies on to get to her job at a public relations agency will be operating by the time she has to go back to the office.

“But I know that I’m privileged compared with other families who are practically losing their homes because they are under water,” she said.

Fiona was centered 50 miles (85 kilometers) southeast of Punta Cana, Dominican Republic with maximum sustained winds of 85 mph (140 kph) on Sunday night, according to the U.S. National Hurricane Center. It was moving to the northwest at 9 mph (15 kph).

It hit on the anniversary of Hurricane Hugo, which slammed into the island in 1989 as a Category 3 storm.

As authorities continue to assess the damage from Fiona, many wondered when power would be restored.

“That’s probably the worst damage there is,” said Tomás Rivera, who co-owns a hotel in the southwest coastal town of El Combate.

U.S. President Joe Biden declared a state of emergency in the U.S. territory as the eye of the storm approached the island’s southwest corner.

The blackout that Hurricane Maria caused was blamed for the deaths of nearly 3,000 people in the storm’s sweltering aftermath, with power in some neighborhoods not restored until a year later. Maria was a devastating Category 4 storm that struck on Sept. 20, 2017.

Luma, the company that operates power transmission and distribution, said bad weather, including winds of 80 mph, had disrupted transmission lines on Sunday, leading to “a blackout on all the island.”

Health centers were running on generators — and some of those had failed. Health Secretary Carlos Mellado said crews rushed to repair generators at the Comprehensive Cancer Center, where several patients had to be evacuated.

More than 3,000 homes still have only a blue tarp as a roof, and infrastructure remains weak, including the power grid. Outages remain common, and reconstruction started only recently.

“I think all of us Puerto Ricans who lived through Maria have that post-traumatic stress of, ‘What is going to happen, how long is it going to last and what needs might we face?’” said Danny Hernández, who works in the capital of San Juan but planned to weather the storm with his parents and family in the western town of Mayaguez.

The storm pummeled cities and towns along Puerto Rico’s southern coast that have not yet fully recovered from a string of strong earthquakes starting in late 2019.

More than 1,000 people with some 80 pets had sought shelter across the island by Sunday night, the majority of them in the southern coast.

Fiona was forecast to swipe the Dominican Republic early Monday and then northern Haiti and the Turks and Caicos Islands with the threat of heavy rain. It could threaten the far southern end of the Bahamas on Tuesday.

Hurricane warnings were posted for the Dominican Republic’s eastern coast from Cabo Caucedo to Cabo Frances Viejo, and for the Turks and Caicos.

Fiona previously battered the eastern Caribbean, killing one man in the French territory of Guadeloupe when floods washed his home away, officials said.